A new national poll provides more evidence that White House contenders Beto O’Rourke of Texas and Pete Buttigieg of Indiana are on the rise in the race for the Democratic presidential nomination.

O’Rourke announced his candidacy two weeks ago and attracted large crowds and lots of media buzz as he campaigned in all four of the early voting primary and caucus states. He also raised an eye-popping $6 million in his first 24 hours as a candidate.

Buttigieg comes in at 4 percent in the survey, several slots behind the leaders but still representing a pickup in the polls. The South Bend, Indiana mayor and Afghanistan War veteran was considered an extreme long shot for the nomination when he launched his presidential exploratory committee in January. But he's seen his star rise in recent weeks, attracting larger crowds on the campaign trail and plenty of positive coverage on the cable news networks and political media.

Topping the poll is former Vice President Joe Biden, who stands at 29 percent. Biden is likely to announce his candidacy for the White House in the coming weeks. Independent Sen. Bernie Sanders of Vermont, who’s making his second straight bid for the Democratic nomination, is in second in the survey, at 19 percent.

Biden and Sanders have topped almost every national and early voting state poll in the 2020 Democratic race, including a Fox News poll released a few days ago. Their strong standing is fueled in part by their widespread name recognition. Name ID heavily influences horserace polls in the early parts of a cycle.

Sen. Kamala Harris of California came in fourth in the poll, at 8 percent, with Sen. Elizabeth Warren of Massachusetts at 4 percent alongside Buttigieg. Sens. Cory Booker of New Jersey and Amy Klobuchar of Minnesota stood at 2 percent. The rest of the large field of Democratic contenders registered at 1 percent or less.

The poll was the first Quinnipiac has conducted this cycle of the 2020 Democratic nomination race. But it represents a rise for both O'Rourke and Buttigieg compared with other recent polls.

The 37-year-old Buttigieg and the 46-year-old O’Rourke are decades younger than Biden, 76, and Sanders, 77. But seven out of 10 Democrats and Democratic-leaning voters questioned in the survey said that age wasn’t an important factor in their vote for a presidential nominee.

“Hungry for a candidate to take on President Donald Trump, Democrats and Democratic leaners put the three B's, Biden, Bernie and Beto, at the top in a race where age, race and gender take a back seat to electability and shared views,”  Quinnipiac University poll assistant director Tim Malloy said.

By a 56-35 percent margin, Republicans and GOP-leaning independents said they don’t want to see someone primary challenge President Trump next year. And in another finding, the survey indicates that 53 percent of all voters say they won’t vote for Trump in the 2020 general election.

The Quinnipiac University poll was conducted March 21 – 25, with 1,358 voters nationwide questioned by live telephone operators. The survey’s overall sampling error is 3.3 percentage points, with a 5.1 margin of error for the questions on the 2020 Democratic nomination race. 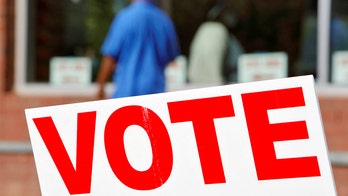