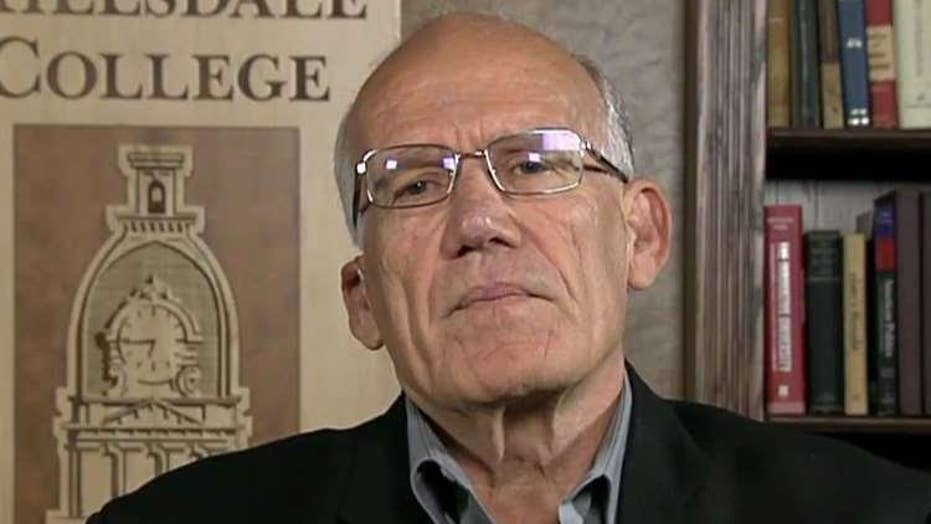 Hoover Institution fellow Victor Davis Hanson says the 'mellow drama' has never been about what Trump said, it's about what Joe Biden and Hunter Biden did.

“This whole melodrama was never about what Trump says, it’s about what people did,” Hanson told “Fox & Friends.”

Hanson said the impeachment “hysteria” started with House Speaker Nancy Pelosi, D-Calif., “jumping the gun” and pursuing an investigation without first reading the transcript of Trump’s phone call with President Volodymyr Zelensky nor the whistleblower complaint.

“Most importantly, we’re at the very beginning of this. We don’t know anything about Hunter Biden other than it looks very suspicious and this information is going to keep coming out and out and out,” Hanson said.

Former Prime Minister of Ukraine Mykola Azarov said this week that authorities must investigate Hunter Biden to establish whether or not his role on the board of a Ukrainian gas company complied with the nation’s laws.

Azarov, who served under Ukraine's former pro-Russian President Viktor Yanukovych, did not specify which laws he was referring to. Trump and his personal attorney Rudy Giuliani have called on current Ukrainian President Volodymyr Zelensky to investigate the Biden family's dealings with Ukrainian firm Burisma Holdings.

Burisma reportedly paid Hunter up to $50,000 per month to sit on its board at the same time his father was leading the Obama administration's diplomatic dealings with Kiev. A second private equity firm founded by the younger Biden also reportedly received $3.4 million from the same company.

Trump and his personal attorney, Rudy Giuliani, have alleged that when Ukrainian prosecutors tried to investigate Burisma Holdings for corruption, then-Vice President Biden pressured the government to fire the head prosecutor. Biden has denied knowing about his son's business dealings.