'Save Our Allies' team member Dr. Richard Jadick opens up on efforts to evacuate the Fox News correspondent critically injured in Ukraine on 'The Story.'

A decorated Naval surgeon and member of the "Save Our Allies" group that helped rescue critically injured Fox News correspondent Benjamin Hall from Ukraine revealed new details Wednesday about the evacuation that required a medical transport from a war-torn combat zone.

Dr. Richard Jadick, known as the most decorated military doctor to have served in Iraq, was teaching a course in Tennessee when he got a call from "Save Our Allies" asking him to help carry out rescue missions in Ukraine. Days later, Hall was struck by incoming fire from Russian forces outside of Kyiv.

"I got the call, headed home. Got myself packed, got on an airplane and let my family know where I was going," Jadick told "The Story." "It was later on in the week that we got the call to move to Kyiv, that we had to evacuate a critically wounded patient."

"I went upstairs and saw Ben," Jadick recalled. "I said ‘Ben, you don’t know me. I’m Rich Jadick. I’m a physician. I’m here to get you out.’ And he said, ‘When you want to go?’ I said we’ll get ready in 20 minutes, we're going to get you packaged up and we're going to figure out a way to get you out of here."

Jadick said he was grateful to be "at the right place with the right people at the right time," and credited "Save our Allies" for positioning the group in the region.

To extract Hall from the combat zone, the group worked with the Pentagon and Defense Secretary Lloyd Austin, along with the Polish and Ukrainian militaries. The effort on the ground was led by a "special operations and intelligence veteran," the group revealed, as the team made sure Hall was stabilized and overseen by military medical personnel during the transport. 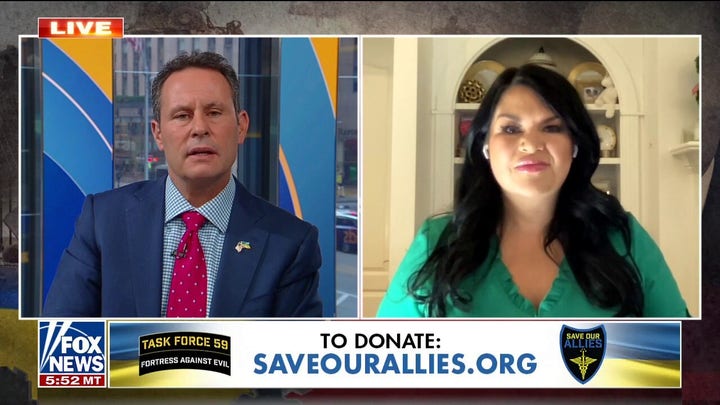 "Ben had some critical injuries that required a lot of attention," Jadick said. "One of the hallmarks of evacuating a patient is patients get worse under rough conditions getting out of a bad situation. And the bad situation could have been made worse just by getting in the wrong kind of evacuation situation, so we worked hard at putting together the right scenario to get him out safely," he explained.

Once successfully evacuated from Ukraine, Hall was transported across the border to Poland and ultimately to the Landstuhl Medical Center in Germany where he is receiving care.

"I want to put my hats off to the guys that I was with who put that all together. ‘Save Our Allies’ are the ones who had us in the right position to be able to do for Ben what he needed, which is a safe, easy recovery," Jadick said.

Hall was wounded in the same attack outside Kyiv that took the lives of Fox News cameraman Pierre Zakrzewski and journalist Oleksandra "Sasha" Kuvshynova as they reported on the Russian invasion.

"Save Our Allies," a nonprofit organization, was founded back in August with the goal of rescuing Americans and other U.S. allies caught behind enemy lines following the U.S. withdrawal from Afghanistan and subsequent Taliban takeover.

To support "Save Our Allies'" continuing efforts in Ukraine, visit their website.