Congressional Democrats have spent too much effort on bringing down President Trump while letting crucial issues like the humanitarian crisis at the southern border and trade fall by the wayside, House Minority Leader  Kevin McCarthy, R-Calif., told Fox News Saturday.

The House minority leader appeared on "Justice with Judge Jeanine" and accused some of his Democratic colleagues of continuing to push for impeachment despite former Special Counsel Robert Mueller's testimony this week proving that the president did not commit a crime.

"They just celebrated 200 days in power," McCarthy told host Jeanine Pirro of the Democratic majority in the House. "If you measure [the same amount of time] to the last Congress, we had passed more than 300 bills out of committee. They're not even past 200 because they've only focused on impeachment and not solving the problem." 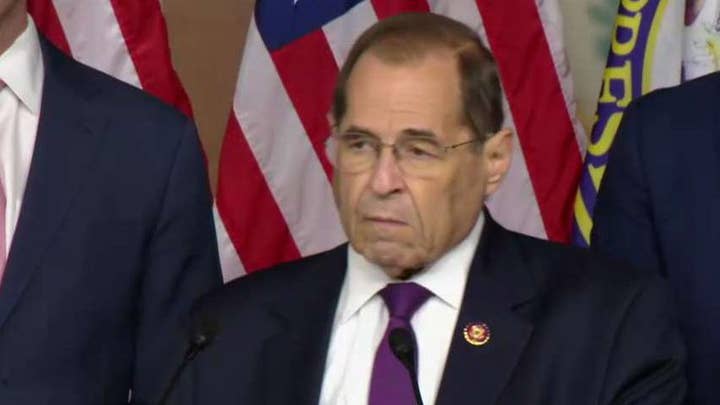 McCarthy said Democrats should address critical issues such as the fledgling trade agreement between the U.S, Mexico and Canada, as well as the situation at the U.S.-Mexico border, which has seen an influx of migrants and continues to stretch Border Patrol resources.

McCarthy also took House Judiciary Committee Chairman Jerry Nadler, D-N.Y., to task over his claim Friday that the only reason Trump wasn't indicted on a charge of obstruction of justice was because of a Justice Department opinion advising against charging a sitting president with a crime. Mueller himself corrected that statement during his testimony Wednesday, saying that "we did not reach a determination as to whether the President committed a crime."

"He has wasted time while we have a big problem at the border. He's held no hearings," McCarthy said of Nadler. "And really with this Mueller report, at the end of the day, this chapter should be shut. We should move on and this is the end of it."

Pirro and McCarthy then discussed divisions in the House Democratic caucus between moderates backed by House Speaker Nancy Pelosi, D-Calif., and progressives like Rep. Alexandria Ocasio-Cortez, D-N.Y. Pelosi and Ocasio-Cortez met Friday to discuss their disagreements, which have spilled into public view via social media in recent weeks.

"This week is a historical week," McCarthy said. "We put the chapter away when it came to Mueller but it is the week that Nancy Pelosi surrendered to the socialists. They are all together now."

Ocasio-Cortez and others have pushed to begin impeachment proceeds against Trump, while Pelosi has publically opposed those efforts.