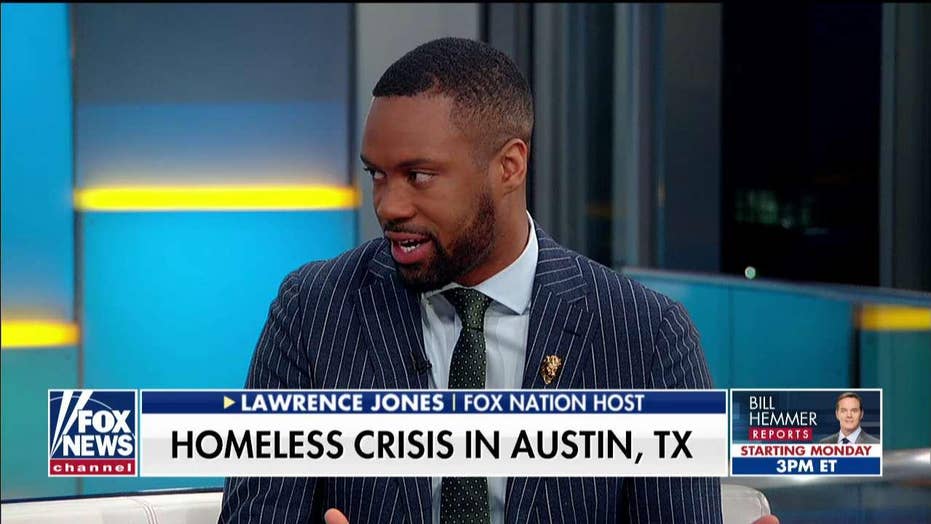 Lawrence Jones reports on the homeless crisis in Austin

Fox Nation host Lawrence Jones reports from the streets of Austin, Texas on their homeless crisis

Appearing on "Fox & Friends: Weekend" with hosts Jason Chaffetz, Rachel Campos-Duffy, and Pete Hegseth, Jones said liberals who believe that the capital of the Lone Star State should be a welcoming community for all -- even when it comes to the homeless population -- don't realize that "it's a public safety crisis going on."

"Not only do you have a health crisis with them leaving feces and needles everywhere, but [in] fact had a homeless person stab one of the citizens there," he remarked. "And, you know, it's been a rampage; there's a lot of violence."

REP. CHIP ROY: CALIFORNIA'S HOMELESS CRISIS COULD BE MIGRATING TO AUSTIN -- HERE'S HOW TO TACKLE IT

In response to the move, Republican Gov. Greg Abbott tweeted in frustration slamming the local government and threatening to override the new local ordinance.

“If Austin— or any other Texas city—permits camping on city streets it will be yet another local ordinance the State of Texas will override,” he tweeted. “At some point cities must start putting public safety & common sense first. There are far better solutions for the homeless & citizens.”

According to an Austin and Travis County Point In Time Survey from January 2019, there has been a five percent uptick in homelessness in Austin with 2,255 total homeless individuals currently residing there.

Jones told the "Friends: Weekend" hosts that while covering the crisis downtown, he saw people shooting up drugs and fighting each other.

"And, the police have essentially been told by the local councils to step back," he added. "And so, [Gov. Abbott] said, 'Look I have authority, right? I want local control...I live in Austin. This is where the capital is and I'm sending the state troopers in to clean this mess up.'"

"Unfortunately," said Jones, "when they clean it up, the homeless people bring the stuff right back."

Jones said the issues lies in the "poor management of funds" because it's not the lack of funding.

"If anyone knows anything about Austin, they have a lot of money," he said, noting that Texas is very business-friendly.

"But, the city council refuses to invest the right money to get this done. And, they prefer to take the easy way out," he stated. " It's the same for San Francisco and L.A. as well," he said. "They don't have money problems. They just don't know how to manage those funds to put those homeless people in the right place.