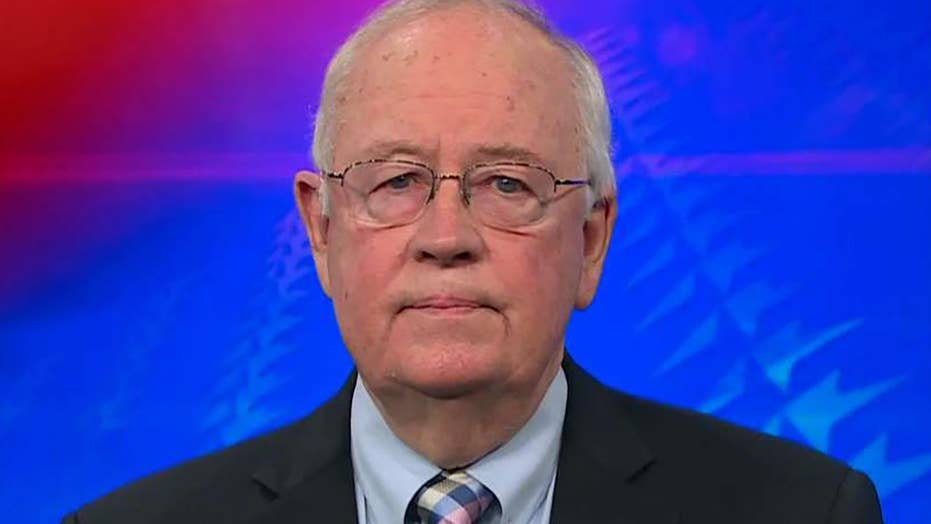 Former Independent Counsel Ken Starr predicts that Inspector General Michael Horowitz and his report will show that there was no Russian collusion or conspiracy.

Former Independent Counsel Ken Starr predicted Thursday that Justice Department Inspector General Michael Horowitz's upcoming report will be a "revelation of the truth" on how the Trump-Russia investigation started.

He also said he believes the report will collapse once and for all the idea that there was "conspiracy" between the Trump campaign and Russian operatives in 2016. Starr said the Mueller report "begrudgingly" outlined that fact.

"Let's go to Genesis, Chapter One. And that is what leads us right back to Michael Horowitz and his report. I think where it will lead us -- and this is a predictive judgment and I may be proven wrong -- is that the entire house of cards collapsed," he said.

Speaking on "America's Newsroom," Starr was asked by Bill Hemmer about the dismissal of the Democratic National Committee's (DNC) lawsuit against key members of the Trump campaign and WikiLeaks over hacked DNC documents.

A federal judge in frank terms ruled they "did not participate in any wrongdoing in obtaining the materials in the first place" and therefore bore no legal liability for disseminating the information.

The ruling came as Democrats increasingly have sought to tie the Trump team to illegal activity in Russia, in spite of former Special Counsel Robert Mueller's findings that the campaign, in fact, refused multiple offers by Russians to involve them in hacking and disinformation efforts.

President Trump, in a tweet late Tuesday, noted that the judge in the case, John Koeltl, was appointed by Bill Clinton. The president called Koeltl's decision "really big 'stuff'" and "yet another total & complete vindication and exoneration."

Rep. John Ratcliffe said on "Hannity" last month that Horowitz had concluded his probe into alleged abuse of the FISA court process during the investigation of the Trump campaign in 2016. He noted that it was unlikely to become public until after Congress' August recess as it undergoes a review of the classified material it contains.

A separate review of the Russia probe's origins is also being conducted by U.S. Attorney John Durham, who was tapped to oversee the review in May by Attorney General Bill Barr.