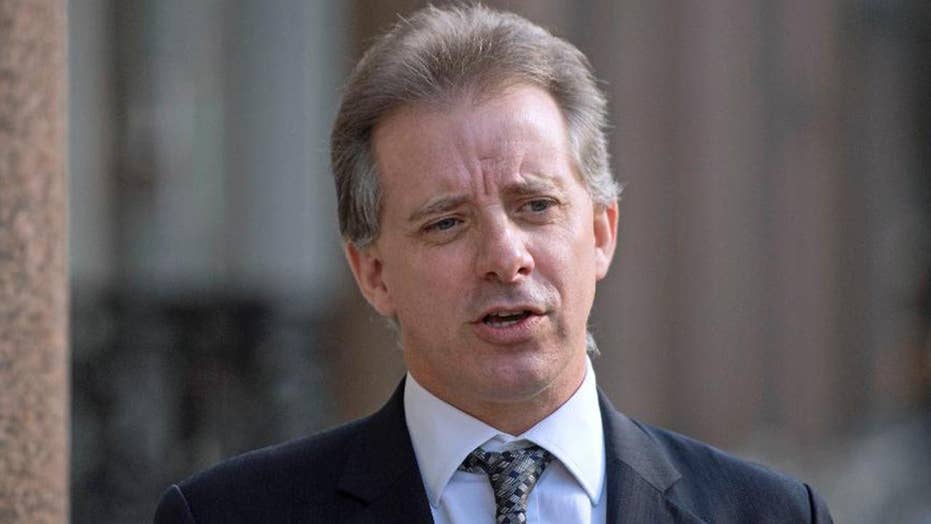 Former Clinton pollster Mark Penn says anyone who reads the dossier will know what a 'joke' it was.

As part of its ongoing "multifaceted" and "broad" review into potential misconduct by U.S. intelligence agencies during the 2016 presidential campaign, the Justice Department revealed Monday it is also investigating the activities of several "non-governmental organizations and individuals."

Additionally, the DOJ announced that the probe, let by Connecticut U.S. Attorney John Durham, was looking into the involvement of "foreign intelligence services." Former Trump aide George Papadopoulos told Fox News last month that an informant who was likely "CIA and affiliated with Turkish intel" had posed as a Cambridge University research assistant in September 2016 and tried to "seduce him" to obtain information linking the Trump team to Russia.

The information was contained in a letter to House Judiciary Committee Chairman Jerry Nadler, D-N.Y., who had inquired as to the scope of Durham's investigation. The letter could indicate that the DOJ is looking closely at work done during the campaign by Fusion GPS, the firm retained by the Hillary Clinton campaign and Democratic National Committee (DNC) to conduct opposition research against the Trump campaign.

Last week, reports indicated Steele had agreed to talk with Durham if certain preconditions were met. Multiple sources familiar with the matter told Fox News, meanwhile, that Durham is “very dialed in” and “asking all the right questions." Separately, sources within the Justice Department confirmed to Fox News that Barr has met “on multiple occasions in recent weeks” with Durham in Washington, D.C.

Numerous problems with the Steele dossier's reliability have surfaced, including several issues that were brought to the FBI's attention before it cited the dossier in its FISA application and subsequent renewals. Special Counsel Robert Mueller's report made plain, for example, that then-Trump lawyer Michael Cohen did not travel to Prague to conspire with Russian hackers seeking to access Democrat files, as the dossier alleged.

North Carolina GOP Rep. Mark Meadows told Fox News on Sunday he has seen "additional documents" that demonstrate that “prior to the first FISA application, Peter Strzok, Andy McCabe, and others at the FBI knew that Christopher Steele's dossier was not credible.” Internal FBI text messages obtained by Fox News in March showed FBI brass scrambling to respond to a concern from a senior DOJ official about the potential "bias" of a key FISA source.

Meadows, speaking to "Fox News Sunday," pointed specifically to a report from The Hill's John Solomon, who found that Ukrainian businessman Konstantin Kilimnik, a key figure in Mueller's report, was actually a U.S. informant. In his report, Mueller linked Kilimnik to Russian intelligence, and did not mention Kilimnik's secretive ties to the U.S. in the report other court filings -- even as Mueller suggested former Trump campaign chairman Paul Manafort's ties to Kilimnik were nefarious.

Solomon, reporting for the Hill, also recently unearthed a documented conversation Steele had with a State Department contact -- which were relayed to the FBI -- in which Steele claimed the Russians were running a “technical/human operation run out of Moscow targeting the election" and that "payments to those recruited are made out of the Russian Consulate in Miami."

There is no Russian consulate in Miami, a fact the State Department official, Deputy Assistant Secretary of State Kathleen Kavalec, emphasized in her notes. Additionally, Steele had suggested his client was "keen" to see his information come to light prior to Election Day. Kavalec forwarded her notes to the FBI and other government officials several days before the FISA warrant was issued for Page. Fox News has confirmed The Hill's reporting.

Further, in its original FISA application and subequent renewals, the FBI told the FISA court that it "did not believe" Steele was the direct source for a Yahoo News article implicating Page in Russian collusion. Instead, the FBI suggested to the court, the September 2016 article by Michael Isikoff was independent corroboration of the dossier.

But London court records show that contrary to the FBI's assessments, Steele briefed Yahoo News and other reporters in the fall of 2016 at the direction of Fusion GPS.

Carter Page has not been charged with any wrongdoing, even though the FBI called him an "agent of a foreign power" in its October 2016 FISA application. On Sunday, Page told Fox News' "Sunday Morning Futures" that his actions had been "completely spun in the fake Mueller" report to help advance what he characterized as Democrats' "ridiculous" goal of impeachment.