Gutfeld: They literally call everything racist

Fox News Channel’s foray into late-night-style programming, "Gutfeld!," has quickly built an audience by offering an alternative to the far-left offerings on other networks, as namesake host Greg Gutfeld has dominated CNN and MSNBC in the ratings.

"He’s up there with the best of them," said Dave Berg, who was co-producer for the legendary "The Tonight Show with Jay Leno" and went on to pen, "Behind the Curtain: An Insider's View of Jay Leno's Tonight Show."

"Gutfeld!" has completely dominated the timeslot competition on both CNN and MSNBC. In fact, the Fox News late-night show attracted more viewers than anything CNN had to offer, at any time, during crucial May Sweeps.

"Gutfeld!" has completely dominated timeslot competition on both CNN and MSNBC.

The success of "Gutfeld!" has come without heavily promoted Hollywood celebrities and fewer resources than legacy late-night shows, but Berg thinks the namesake host has found a winning formula. He’s a fan of the roundtable format, which provides a platform to a blend of trusted regulars and newcomers, but Gutfeld’s style of humor is what Berg considers the most important element of the program.

GREG GUTFELD: THE LEFT WILL LITERALLY CALL ANYTHING RACIST

"Gutfeld is doing jokes no one else is doing, he’s showing that the emperor has no clothes and nobody else is," Berg said. "He’s hitting areas, I’ll call it jokes, that appeal to conservatives, topics that the others aren’t doing like Critical Race Theory and cancel culture, showing all the flaws of the administration that none of the other late-night hosts are doing." 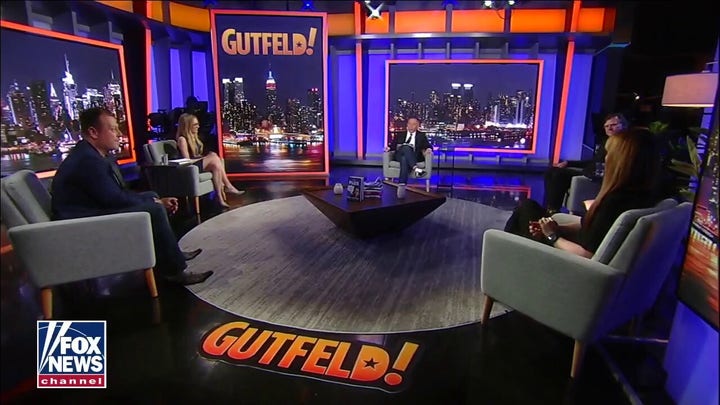 Berg has seen the tone of late-night television drastically change from the days of Leno and David Letterman, as the new era of so-called comedy has alienated nearly half of America. He feels that regular viewers of Leno or Letterman who happened to lean right politically were left without a home until "Gutfeld!" burst onto the scene.

"Why would they want to watch Colbert? He’s doing jokes that are basically saying that they’re morons, that they’re fools, they’re racist," Berg said. "Gutfeld is giving them a reason to come back to the table and watch a late-night show."

Gutfeld, who is frequently accompanied by Fox News contributors Kat Timpf and Tyrus, has welcomed various Fox News personalities, commentators, comedians, and both former and current politicians onto his show to discuss some of the biggest headlines and trending topics of the day without the liberal bias that is now common throughout the genre.

"They’re doing something that the other cable networks -- and frankly the other late-night shows – don’t know how to do anymore and that’s to be funny and inject levity," Media Research Center analyst Nicholas Fondacaro told Fox News.

STEPHEN COLBERT, 'THE LATE SHOW' GIVE MELANIA TRUMP A 'F--- YOU' SENDOFF

"For the last few years, the late-night ‘comedy’ shows have abandoned comedy and turned their programs into platforms for vindictive sniping from the left," Fondacaro said. "And in the processes, they’ve become home to some of the nastiest people and comments that are harmful to civil discourse."

In recent memory, Samantha Bee referred to Ivanka Trump as a "feckless c—t," Jimmy Kimmel compared Florida to "America's North Korea" and mocked Melania Trump’s accent, Trevor Noah suggested the entire state of Florida should be blown off the map and James Corden declared "all the people that I like and respect don't like President Trump."

These examples of bias against anyone without far-left beliefs occurred as other late-night hosts like Colbert and Seth Meyers essentially ditched comedy for activism altogether.

Conservative strategist Chris Barron was a regular on "Red Eye," the 3 a.m. ET satirical talk show on Fox News that Gutfeld hosted from 2007-2015.

"Even back then… Greg was killing it," Barron told Fox News.

"He built a huge following of fans by doing something different. He offered viewers a quirky, sometimes outrageous but always hilarious, look at the news of the day -- all without out the left-wing slant of the rest of the late-night talk shows," Baron continued. "It’s no surprise to me that Greg is killing on his new show."

While "Gutfeld!" has been a hit for Fox News, Fondacaro feels liberal cable outlets CNN and MSNBC would be hard-pressed to find anyone who could mirror the formula.

"Greg is a natural at comedy. And the fact that he used to host another late-night Fox show with a strong comedic bent, ‘Red Eye,’ is a boon. Trying to imagine Chris Cuomo and Don Lemon attempting to pull off comedy would be a clown show in its own right. But it wouldn’t be what they were going for and it wouldn’t be sustainable," Fondacaro said.

Cuomo actually took things into his own hands last year when he mortified the network and tarnished his reputation by attempting a prop comedy routine featuring oversized Q-Tips during an interview with his big brother, New York Gov. Andrew Cuomo, but the widely panned segment was hardly a legitimate attempt at comedy programming for CNN.

CNN’s Chris Cuomo performed a prop comedy during a widely panned segment in 2020.

"The prospects for MSNBC aren’t much better even though they could lean on NBC for help. Just look at how Saturday Night Live has put off so many viewers because of their incessant reliance on politics. It’s obviously harmed their ability to do comedy on other topics," Fondacaro added. "And they’ve gotten awkward and stale."

Political satirist Tim Young agrees that a liberal alternative to "Gutfeld!" wouldn’t be able to replicate its success.

"CNN and MSNBC have trained their viewers to be angry and outraged all the time so the concept of any kind of humor becoming a part of their lineup would fail immediately with their audience. Brian Stelter, Chris Cuomo and Don Lemon's shows aren’t comedy, but they are laughable," Young told Fox News.

"It doesn’t take a rocket scientist to see that demand is down for left-leaning political screeching that is labeled humor," Young continued. "There is a huge market out there for right-leaning humor but it's not represented at all on TV other than with ‘Gutfeld!,’ which is one of the keys to the show being a ratings hit."

The list of failed late-night hosts is extensive, as everyone from Alec Baldwin and Chevy Chase to Magic Johnson, have seen their attempts get quickly nixed. CNBC once tried it with outspoken tennis legend John McEnroe, but that also failed. Gutfeld’s critics made a point to criticize the show at every turn during its early days, but as the show has taken off, the negative tweets have slowed.

"Remember the concerted effort to trash ‘Gutfeld!’ when it launched? Where did they all go? The best way to silence losers, is success," the host tweeted last week.