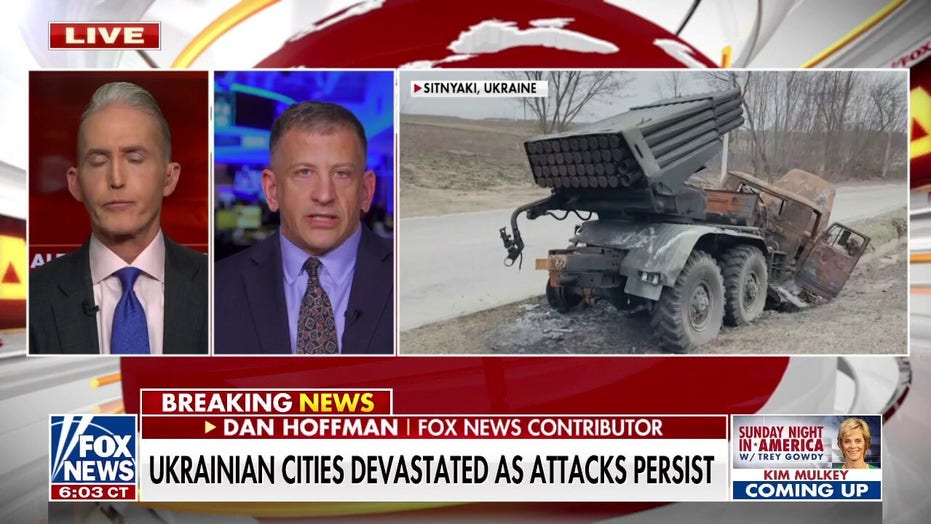 As Ukrainian forces continue to fight back the Russian military, Hoffman noted on "Sunday Night in America" that Russian President Vladimir Putin has been forced to change his goals.

"I think his goals have definitely changed. At the beginning, he said he had this special military operation, refused to call it a war. He expected to occupy Ukraine, decapitate its government within two or three days and install some puppet government there that would suit Moscow’s interests. That didn’t happen, and so he’s had to swivel. And in the Potemkin village of propaganda where he lives, he wants to tell us that now Russia’s goal is simply to secure eastern Ukraine," Hoffman said.

Although Hoffman recognized Putin’s desire to enrich Moscow, he explained that the Russian president is likely motivated by his fear of democracy.

"What scares Vladimir Putin at the heart of this conflict is democracy. It’s not that NATO represents a threat. NATO’s a strategic defensive alliance and Ukraine had no chance of joining NATO anytime in the near term. But Putin couldn’t stomach a democracy on his border with a Russian-speaking population and commercial links to Europe," Hoffman said. "That’s why he launched this brutal attack which has caused so many Ukrainian civilians, innocent civilians, to die."

Host Trey Gowdy discussed the recent comments by President Biden in declaring that Putin "cannot remain in power." After intense backlash, the White House, along with Biden himself, insisted that he did not call for a regime change.

FORMER RUSSIAN DOUBLE AGENT ON PUTIN’S INVASION OF UKRAINE: ‘NO WAY’ INTEL WAS UNAWARE OF CIRCUMSTANCES

While Hoffman believed that Biden suffered "a lapse in message discipline," he agreed with the sentiment behind Biden’s comments.

"I felt that what he said was a logical conclusion. Putin can no longer rule Russia. He can no longer be in charge. We’ve determined he is a war criminal. Biden has said that. The president said he is a butcher. The Russian military is following Putin’s orders right now to continue to strike civilian targets," Hoffman said.

He added, "I wish that the White House had said, you know, we’ll back this up and say, from Ukraine’s perspective the Russian military should not be following the orders of that KGB guy in the Kremlin based on the fact that he’s caused so much harm and destruction to innocent Ukrainian civilians. This has to stop."

Hoffman concluded that regardless of Biden’s comments, the best course of action is to assist Ukrainian President Zelenskyy.

Ukrainian President Volodymyr Zelenskyy speaks via video call to the Doha Forum in Doha, Qatar, Saturday, March 26, 2022. Ukraine's president made a surprise video appearance Saturday at Qatar's Doha Forum, calling on the energy-rich nation and others to boost their production to counteract the loss of Russian energy supplies. (AP Photo/Lujain Jo)

"Moreover, leaving aside the words that president chose, we’ve got to back those up with giving Ukraine the military equipment they need. President Zelenskyy is begging for it. He’s been begging for air defense, the S-300s, for the MiG aircrafts. We have to figure out a way to get it to him," he said.