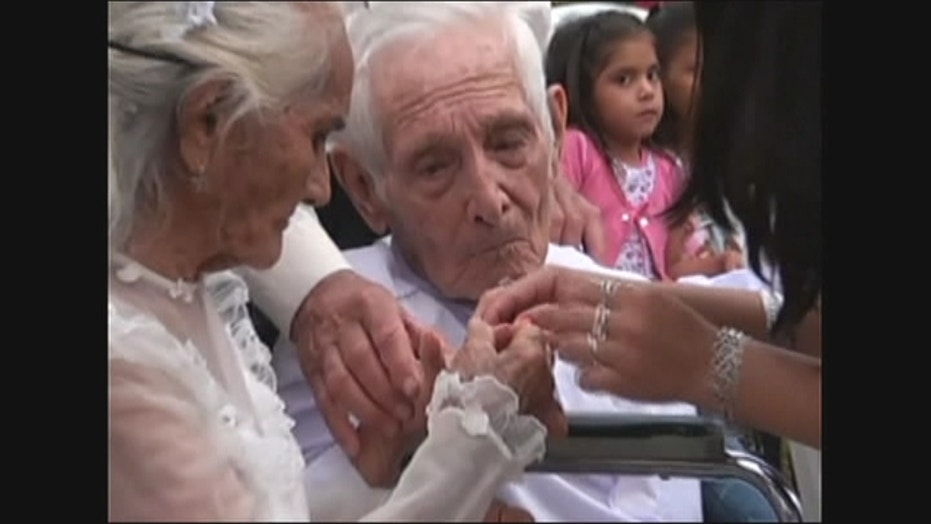 Couple Gets Married After 80 Years Together

By most accounts, it was a traditional wedding ceremony. The bride wore a white gown with flowers woven into her hair. The groom opted for a dress shirt.

They held hands as the priest conducted the ceremony.

But this wasn’t just any regular wedding.

Jose Manuel Riella, the groom, is 103 years old. The bride, Martina Lopez, is 99. The Paraguayans have been together for 80 years, and have eight children together, but they had never tied the knot in the eyes of the church.

So they decided, after eight decades, to make their union official.

Riella married Lopez Saturday in the backyard of their home, some 200 miles north of the capital, Asuncion. Priest Christian Paiva led the religious ceremony and he told The Associated Press Wednesday that the couple had been married by law for 40 years but not by the church.

"My children asked us why we didn't get married, what are you waiting for, they asked," Lopez said.

Riella, who was in a wheelchair, has some hearing problems but still recognizes his family members. His wife still takes care of all home chores.

All but two of their children were able to attend the big day.

The couple exchanged rings during the ceremony, needing a little assistance from family members to get them on.

"We are very happy," Lopez said, as guests lined up to offer their congratulations and gifts to the couple.

After the ceremony, the couple posed for family photos.