It takes a village to raise a child, and every day of parenthood is an adventure.

Raising a family in today’s modern age bears an unprecedented set of challenges — and, as we've seen in 2019, every one of them can go awry.

From failed gender reveal to photo-shoot flops, read on for nine of the funniest parenting fiascoes that made headlines this year. (And never forget that mom and dad almost always know best.)

Avid online shoppers know that purchases don’t always turn out as expected, but one Illinois woman was shocked to find the T-shirt she bought for her young daughter read “f--- the police.”

Avid online shoppers know that purchases don’t always turn out as expected, but one Illinois woman was shocked to find the T-shirt she bought for her 3-year-old daughter read “f--- the police.”

In May, the mom was stunned to find the offensive phrase on an otherwise innocent white "Frog and Toad" shirt she bought from China-based retailer AliExpress.com. Calling her husband to share the news, the couple “lost it” with laughter and "just screamed together."

“As your son, I regret to inform you that I’ve missed my means of public transportation,” the cheeky youngster said. (Sarah Holliday)

A Missouri boy’s honest letter to his mother confessing that he missed the bus to school — and why that wasn’t such a bad thing — left Internet in hysterics in June.

“As your son, I regret to inform you that I’ve missed my means of public transportation,” the cheeky youngster began the admission, inked on ruled notebook paper.

“I know you must be on a roller coaster of emotions right now but rest assured, I’ve decided to stay home. This was a tough decision to make while you were gone for 20 minutes,” he continued. “I'm probably in my bed moping about the fact that I can't go to school, so please don't interrupt me. If you require any further assistance, please see the pros/cons list.”

Photographer Tiffany Clark didn’t initially expect anything out of the ordinary while recently preparing her cousin, high schooler Evan Dennison, pictured, for his close-up. (Courtesy of Chaos and Clark Photography​​​​​)

Over the summer, one fearless Indiana teenager became an overnight social media sensation after his playful senior year portraits — featuring the bathrobe-clad young man posing in a field — went viral.

Nevertheless, the 17-year-old’s mother was reported to be “very unhappy” with the images, and planned have her son take some more “mom-appropriate” shots in the future.

Over the summer, an anonymous mom’s rant about “childless” couples at Disney World — whom she claimed to hate “with a BURNING PASSION”  rocked Twitter. (iStock)

Later in July, an anonymous mom’s rant about “childless” couples at Disney World, whom she claimed to hate “with a BURNING PASSION,” rocked Twitter. The unnamed woman began her sometimes-vulgar diatribe by lashing out at “childless couples” and “immature millennials,” claiming the Disney experience was somehow wasted on them.

“DW is a FAMILY amusement park!” she wrote. “Yet these IMMATURE millennials THROW AWAY THEIR MONEY ON USELESS CRAP!!!! They have NO idea the JOY and HAPPINESS it is to MOTHERS WHO BUYS [sic] THEIR BABIES TREATS AND TOYS!!!!”

The complainer continued to allege that childless visitors will “never experience the exhaustion” of chasing a kid around the park.

One adorably frazzled picture taken after a five-year-old girl’s first day back at school has gone massively viral on Facebook, though her mother is still mystified as to how the youngster got so messy in the first place. (Courtesy of Barrhead News)

We’ve all been there, Lucie.

A photo of an adorably frazzled 5-year-old girl from Scotland on her first day back to school went massively viral on Facebook in August, and her mother was mystified by how the youngster got so messy in the first place.

Though the child was pristinely clean when dropped off at school, the “after” was a different story. The primary school pupil appeared exhausted with her hair bow askew, her sweater and unicorn backpack falling off her shoulder, her skirt off-kilter, and a knee sock rolling down her leg. Some commenters joked it looked like little girl had weathered a wild night on the town, while many parents agreed that their own children frequently returned home from school looking a whole lot worse for the wear than when they departed. 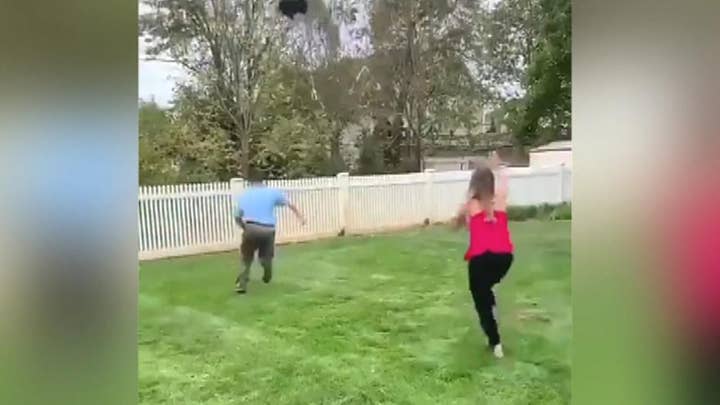 In video footage that surfaced online in October, a couple's gender-reveal party went off the rails in the most hilarious way.

Video shared to Instagram featured a man and a woman using sticks to swat at a big black balloon seemingly tied to the ground, as part of the couple's gender-reveal celebration with family and friends. Loved ones shouted at the couple to hit and pop the balloon, which presumably contained confetti or smoke that would indicate the sex of their child. Eventually, the man gave the balloon a hard whack that loosened the string from the ground, causing the balloon to drift away. The soon-to-be dad attempted to chase after the balloon, and even tried hopping a fence to grab at it, only to fall to the ground in defeat.

Aaron Whysall (right, with daughter Olivia) said he wasn't even angry, but rather concerned and impressed at his daughter's ability to scarf down 18 yogurts. (Kennedy News and Media)

Weeks later, a dad in the U.K. said he wasn’t even angry — but rather concerned and impressed — after his 3-year-old daughter managed to eat 18 cups of yogurt in the 10 minutes she was left unattended.

“I couldn't even tell her off for it because it was just too funny. I was more overwhelmed than anything,” the man said.

Moving forward, the family will be storing all yogurts stored on the top shelf of the fridge, the father added.

8. Mom spots terrifying 'ghost baby' in son's crib; says she 'could kill' husband after learning cause 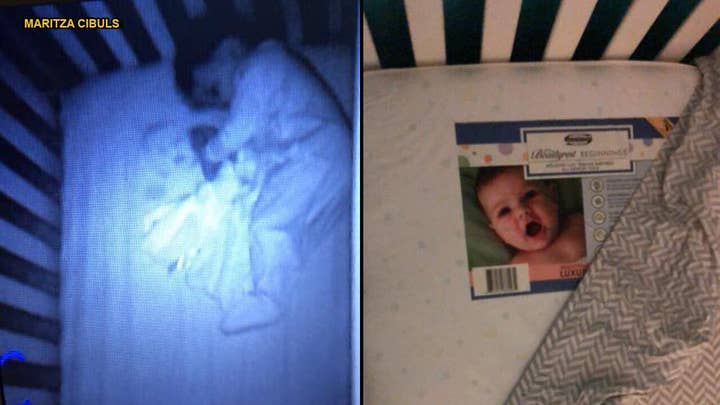 Halloween came early this year for an Illinois mom after her husband forgot an all-important step while making their son’s bed.

Upon glancing at the baby monitor one evening in October, the woman saw not just her 18-month-old son asleep in his crib, but also what looked like a “ghost baby” snuggled up next to the child.

In honor of the spookiest day of the year, one Alabama mom staged a frightful Halloween-inspired photo shoot, depicting her husband and 11-month-old daughter as zombies, that immediately went viral online. (Tifflynn Photography)

In honor of the spookiest day of the year, one Alabama mom staged a frightful Halloween-inspired photo shoot depicting her husband and 11-month-old daughter as zombies. In the spirit of the holiday, the 11-month-old girl even played around with her “undead” dad and poked him in his zombie “guts.”

According to the toddler’s mom, the baby girl was not upset by the shoot, but instead excited to eat the gruesome props, which were all made from edible matter like cake and berries.