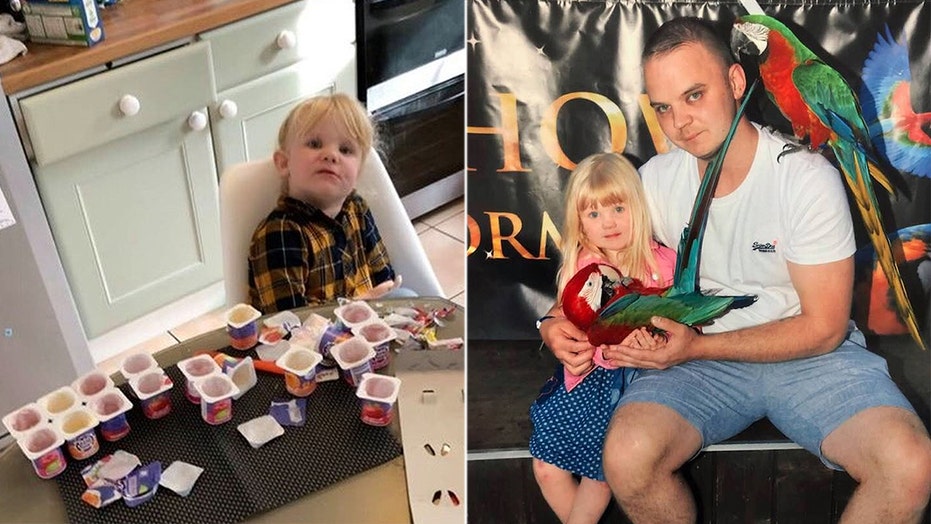 A dad in the U.K. says he wasn’t even angry — but rather concerned and impressed — after his 3-year-old daughter managed to eat 18 cups of yogurt in the 10 minutes she was left unattended.

SEE IT: BABY'S 'OFFICE'-INSPIRED HALLOWEEN COSTUME IS A HUGE HIT

Arron Whysall, from Nottingham, England, recently shared a hilarious photo of his accomplished-looking daughter Olivia sitting in front of the empty yogurts, which she took from the refrigerator when Whysall was fixing a fence in the backyard.

Aaron Whysall (right, with daughter Olivia) said he wasn't even angry, but rather concerned and impressed at his daughter's ability to scarf down 10 yogurts. (Kennedy News and Media)

"I couldn't believe it,” he told the Mirror, adding that he immediately called over fiancee Billie Hardie, to come survey the scene.

“She said, 'There's no way she has eaten all of them,’” Whysall said. "But I told her, 'I think she has because she's just told me she has.’”

Whysall says it was their son Oscar who came outside and alerted him to Olivia’s snacking, although he admits he wasn’t expecting to see Olivia sitting in front of 18 empty Yoplait yogurts when he got inside.

“I couldn't even tell her off for it because it was just too funny. I was more overwhelmed than anything,” he said.

Whysall also figured he should snap a photo and share it online, where it has received a tremendous response.

He also explained to the Mirror that Hardie is self-employed as a child-care worker, which is why she keeps bulk yogurts in the refrigerator. He also confirmed that, from now on, all the yogurts will be stored on the top shelf.

As for Olivia, Whysall said she didn’t suffer any gastric repercussions following the binge, and even managed to eat her entire dinner later that night.

“She does love her snacks,” he told the Mirror.