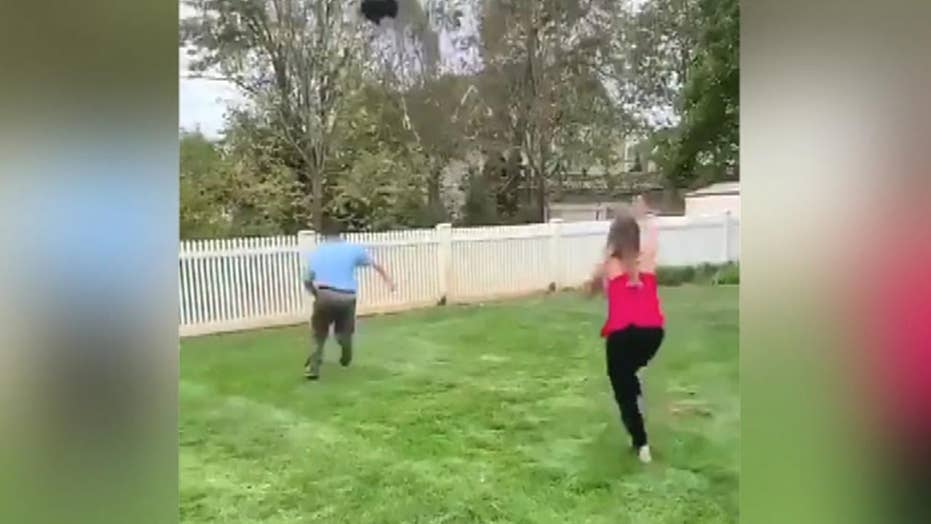 Raw video: A gender reveal went wrong after a couple tried to pop a balloon that ended up just floating away

A couple's gender-reveal party recently went wrong in the most hilarious way.

Video posted to Instagram by user Brent Murray shows a man and a woman using sticks to swat at a big black balloon that's seemingly tied to the ground as part of the couple's gender-reveal celebration with family and friends.

In the footage, which has gone viral online, loved ones watching the action shout at the couple to hit and pop the balloon, which presumably contained confetti or smoke that would indicate the sex of their child.

"Yeah, hit it! Hit it hard!" someone shouts. "Oh man, strike out!" the person says, as the couple fails to pop the balloon.

Eventually, the man gives the balloon a hard whack that loosens the string from the ground, causing the balloon to drift away.

"Oh no!" a man in the background can be heard shouting, as guests at the party begin to scream and laugh.

The soon-to-be dad attempts to chase after the balloon, and even tries hopping a fence to grab at it, only to fall to the ground in defeat.

The footage was also recently posted on social media by Barstool Sports, where it has racked up over a million views. Many commenters particularly liked the way the man tried jumping a fence to get the balloon back.

Others criticized the couple for even having a gender reveal party, as the concept of a "gender reveal" — in general — has recently become the subject of controversy.

It was the latest in a string of gender-reveal parties that have either been criticized or gone wrong.

In September, a Michigan couple was chastised for using a helicopter to learn the gender of their soon-to-be first child. And in July, Australian authorities released footage of a November 2018 gender reveal that included a driver doing a burnout — with blue smoke billowing from a car that later burst into flames.