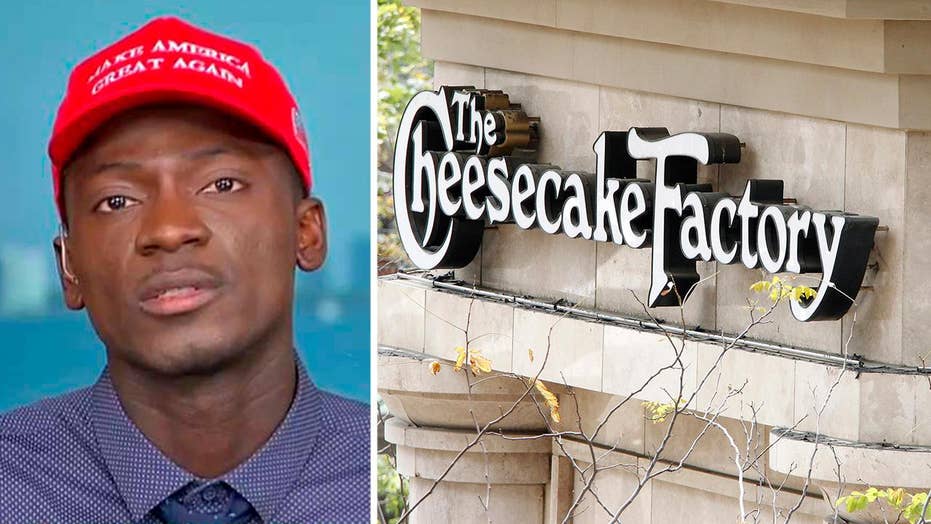 The 22-year-old Trump supporter who was verbally attacked by the staff at a Miami Cheesecake Factory restaurant over his “Make America Great Again” hat described the moment as “just really wrong” in an interview on Wednesday's edition of “Fox and Friends.”

“They all started getting behind us, and one of the [workers] was saying, ‘I’ll knock the hat off his head, I’ll hit him so hard that I’ll knock his hat off,’" recalled Eugenior Joseph of Sunday’s incident.

SEE IT: PATRONS OUTRAGED OVER SIGN POSTED BY CALIFORNIA RESTAURANT

“They were clenching their fists and standing behind me, trying to scare us and stuff ‘I wasn’t really intimidated by anything, but … it was just sad,” he said.

Joseph and his girlfriend’s family had been seated at a Miami location of the Cheesecake Factory on Mother’s Day when he said his girlfriend’s aunt first noticed some of the employees “making gestures” at him from over in a corner.

“I just turned around and looked at them. I didn’t say anything,” remembered Joseph. “I see that they’re staring at me, staring at my girlfriend’s family, trying to intimidate us … I just ignored the whole thing.”

Joseph said he turned back around and started looking at his phone, but soon a crowd of employees gathered behind him, and one began making the threatening comments described above.

Eugenior Joseph, 22, said several employees at Cheesecake Factory's Dadeland Mall location were "shouting and yelling" at him and his girlfriend's family because of his MAGA hat. (Google Street View)

The Cheesecake Factory released a statement Tuesday apologizing for the behavior of its employees, and has since stated that two of the employees at the Dadeland Mall location were terminated over the incident.

“We are very disappointed to learn that two staff members made disparaging remarks about Mr. Joseph’s hat that made him and his family feel unwelcome,” said the restaurant in a statement shared with “Fox and Friends.” “As a result, those two employees are no longer employed with the company.”

Joseph, however, believes way more than two employees were involved. As Joseph recalled, at one point "a whole group of people came out of the kitchen" to jeer at him and his girlfriend when they returned from a trip to the restroom, "shouting and yelling and clapping and just saying things toward me."

"I could tell my girlfriend was really uncomfortable, it was just really wrong."

Witnesses who spoke with The Daily Wire earlier this week further claimed that up to a dozen employees were involved, some of whom had allegedly used the N-Word in reference to Joseph.

Following Sunday's incident, Joseph says he will "definitely" not be returning to the restaurant, and he won't be parting with his Trump hat anytime soon, either.

“I love Donald Trump. He’s just what the country needs. He’s a true American" Joseph said. "People will say what they want about him — everybody’s entitled to their opinion, it’s a free country — [but] I think Donald Trump is everything we all need in this country.”

Above all, Joseph said he also hopes people will be more tolerant in the future.

“At the end of the day, this isn’t, to me, it isn’t about being black, white, or race — anybody could have worn the hat, a white man, a Latino man. It’s just about freedom of speech. This is America. Everybody should be entitled to their own opinions and their own beliefs. If somebody wants to wear the MAGA hat, you should support their decisions.

“Nobody should be disrespected, treated the way I was treated," he said.