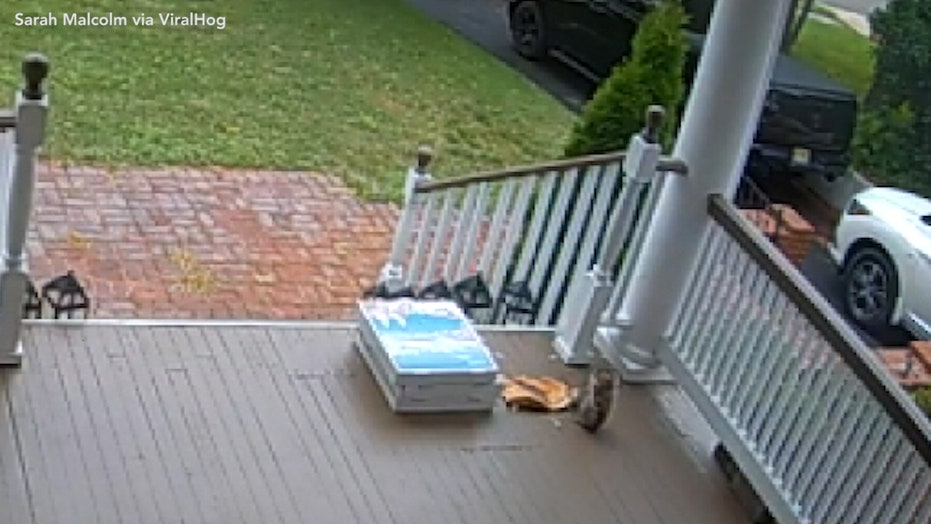 A New Jersey resident’s security camera captured footage of a thief stealing pizza that had been left on the front porch. Also, the thief was a squirrel.

An opportunistic squirrel was caught stealing pizza that had been left on a porch in NJ after a contactless-delivery. (Sarah Malcolm via ViralHog)

A mother from Montclair, N.J., ordered in because she wanted to take a break from cooking, the New York Post reports. She ordered a pizza, which was delivered using the contactless method due to the ongoing coronavirus pandemic.

After the food was left on her porch, the mother, unfortunately, discovered that a squirrel had beaten her to the food.

In the footage, the squirrel can be seen lifting up one of the pizza boxes and working out what appears to be two slices of pizza.

While the family did have to throw out the pizza, they were at least reportedly able to get a refund from Grubhub, who apparently didn’t ask any questions. (Sarah Malcolm via ViralHog)

While the family did have to throw out the pizza, they were at least reportedly able to get a refund from Grubhub, who apparently didn’t ask any questions.

Fortunately, not all pizza deliveries have had issues like this. Some have actually had happy endings.

Fox News previously reported that a Tennessee man reportedly made a pizza delivery driver’s week by giving him a very generous tip. According to the tipper, he was motivated to help out because he feels blessed to still have a job during the current pandemic.

Doug Barlow ordered a pizza from Pizza Hut this past weekend, Fox 17 reports. The driver who delivered the order is probably thankful that Barlow was hungry that night, as the Pizza Hut worker received a $100 tip.

Footage of the encounter was captured by Barlow’s home security camera. It shows the driver starts heading back to his car before realizing what just happened.