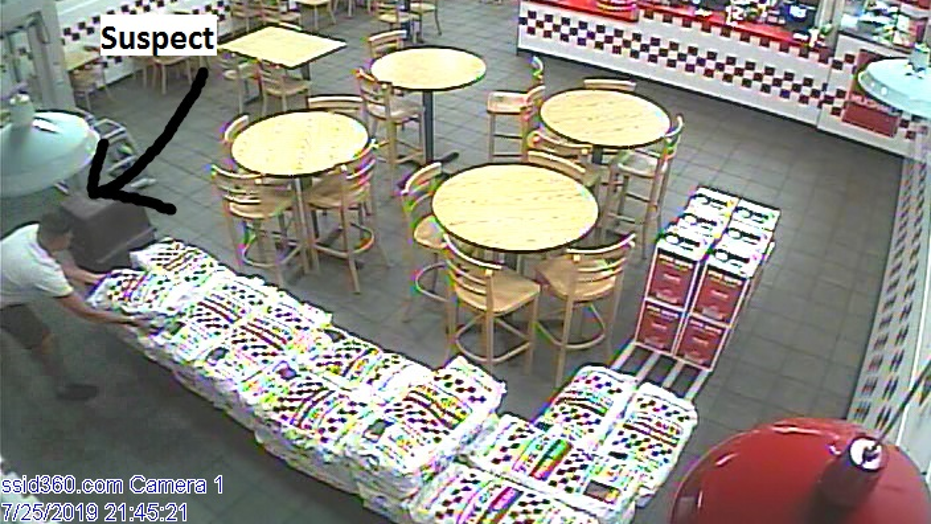 In fairness, Five Guys often leaves these huge bags right near the exit.

Police in Massachusetts say they have identified a man who was spotted stealing a 50-pound bag of potatoes from a Five Guys restaurant in Waltham.

PHOTO: WOMAN ACCUSED OF URINATING ON WALMART POTATOES TURNS HERSELF IN

The Waltham Police Department initially shared news of the theft on Tuesday afternoon via Facebook, asking for the public’s help in identifying a suspect seen absconding with the potatoes.

“After eating at a local restaurant he decided to take a 50 lb bag of pre-cut french fried potatoes on his way out the door,” police said Tuesday. (Waltham Police Department)

“After eating at a local restaurant he decided to take a 50 lb bag of pre-cut french fried potatoes on his way out the door,” police said Tuesday. “We are hoping that we can ‘mash’ all of the evidence together and come up with a suspect.”

Images taken from restaurant’s surveillance footage, and later shared to Facebook by police, show two men ordering food at the counter of the restaurant, and later, one of them grabbing a sack of potatoes to go.

On Tuesday evening, police confirmed the suspect had actually reached out to contact them. The Waltham Police were not immediately available to confirm whether he was charged with any crimes.

Despite coming to a quick end, the customer’s crime continued to inspire plenty of silly comments on Facebook.

“Wow he’s really going to get fried if he gets caught,” one user joked.

“Hurry up! Get this madman off the streets!” someone else said.

Representatives for Five Guys were not immediately available to comment, or to confirm whether they’re just happy nobody peed on their potato supply.