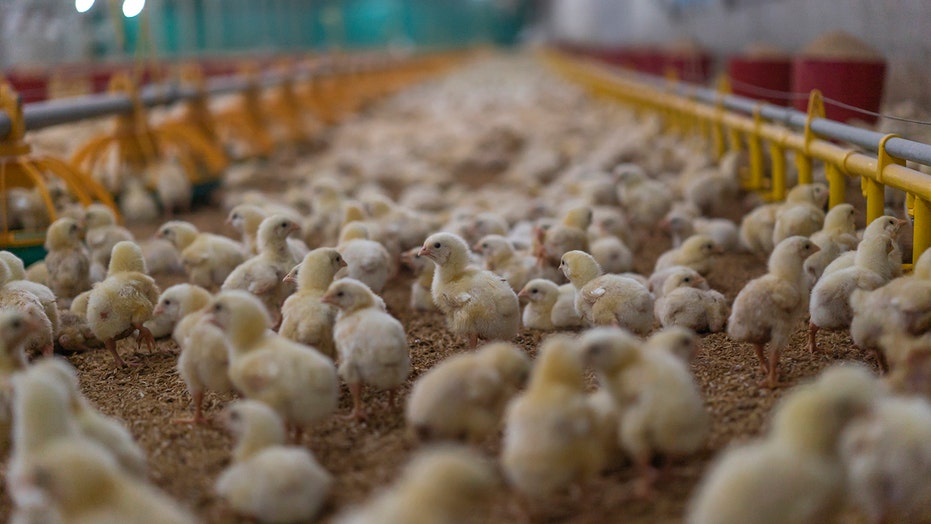 How coronavirus impacts the meat industry

As restaurants, bars remain closed in several states Meat Purveyors CEO, Pat LaFrieda, tells ‘Fox &amp; Friends’ the supply system is not broken and there is plenty of meat available.

Allen Harim Foods, a Delaware-based chicken company, is reportedly being forced to kill up to 2 million chickens before they can be slaughtered and packaged for consumers.

In a letter received by the company’s livestock growers, Allen Harim said the chickens were being “depopulated” due to coronavirus-related staffing shortages at its processing plant, which is making it impossible to “harvest the amount of birds” they were previously able to handle.

The news comes as other experts in the meat industry warned of possible and “severe” repercussions for the nation’s food supply chain in the wake of several processing-plant closures related to COVID-19.

In the letter, which one Delaware grower confirmed to be legitimate to the Delaware News Journal, Allen Harim explained that only about 50 percent of its staff was still reporting for work as of April 8. The company had also begun to supply its growers with fewer eggs and chicks as soon as attendance at its processing plant started to dwindle.

“Unfortunately, reduced placements will not make an impact for six weeks and with the continued attendance decline, and building bird inventory daily, we are forced to make a very difficult decision,” wrote Michele V. Minton, the director of live operations at Allen Harim.

Minton’s letter did not go into detail about how “depopulation” of growers’ flocks would be handled, though the process allegedly began on April 10, with Allen Harim reaching out to individual growers to share details. The company said farmers would be “fairly compensated” for the chickens.

A representative for Allen Harim was not immediately available for further comment.

PETA, meanwhile, has already reached out to Minton in an open letter published to the animal-rights organization’s website, asking her to mandate that the chickens be killed as humanely as possible, and using methods approved by the American Veterinary Medical Associaton for “non-emergencies.”

“These millions of chickens don’t deserve be tossed into an old wood chipper or struck with a two-by-four, as PETA has documented in other ‘depopulation’ efforts,” said Daphna Nachminovitch, PETA’s senior vice president of cruelty investigations, in a press release that accompanied the letter. “The law, veterinary guidance, and common decency all mandate that the chickens receive the quickest and least cruel death possible.”

Meanwhile, experts and executives in the meat-industry continue to be concerned over the effect of the coronavirus on the nation’s supply chain for food.

Earlier this week, the president and CEO of Smithfield Foods, one of the nation’s largest meat-processing companies, has warned of “severe, perhaps disastrous” consequences for the country’s meat supply chain following the closure of its South Dakota plant — and several other meat-processing plants — due to outbreaks of the novel coronavirus.

The president and CEO of Smithfield Foods said the closure of its Sioux Falls plant (not pictured), along with the temporary shuttering of other meat-processing plants, "is pushing our country perilously close to the edge in terms of our meat supply." (Daniel Acker/Bloomberg via Getty Images)

“The closure of this facility, combined with a growing list of other protein plants that have shuttered across our industry, is pushing our country perilously close to the edge in terms of our meat supply,” Kenneth M. Sullivan, of Smithfield, said in a media release issued on Sunday.

The Delmarva Poultry Industry, a trade association with members in Delaware, Maryland and Virginia, told the Delaware News Journal it was also growing concerned after Allen Harim’s “depopulation” news.

"The impact of COVID-19 on the U.S. chicken industry is becoming more apparent as the disease continues to spread throughout the United States," said Holly Porter, the executive director of Delmarva.