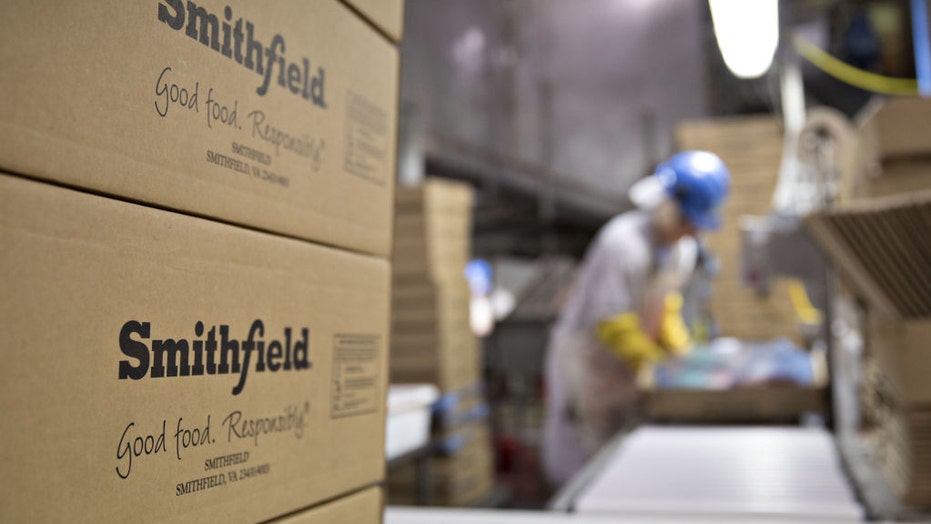 How coronavirus impacts the meat industry

As restaurants, bars remain closed in several states Meat Purveyors CEO, Pat LaFrieda, tells ‘Fox &amp; Friends’ the supply system is not broken and there is plenty of meat available.

The president and CEO of Smithfield Foods, one of the nation’s largest meat-processing companies, has warned of “severe, perhaps disastrous” consequences for the country’s meat supply chain following the closure of its South Dakota plant — and several other meat-processing plants — due to outbreaks of the novel coronavirus.

“The closure of this facility, combined with a growing list of other protein plants that have shuttered across our industry, is pushing our country perilously close to the edge in terms of our meat supply,” Kenneth M. Sullivan, of Smithfield, said in a media release issued on Sunday.

MANY RESTAURANTS WEATHERING CORONAVIRUS CLOSURES BY CONVERTING TO GROCERY OUTLETS

“It is impossible to keep our grocery stores stocked if our plants are not running. These facility closures will also have severe, perhaps disastrous, repercussions for many in the supply chain, first and foremost our nation’s livestock farmers. These farmers have nowhere to send their animals.”

The president and CEO of Smithfield Foods said the closure of its Sioux Falls plant (not pictured), along with the temporary shuttering of other meat-processing plants, "is pushing our country perilously close to the edge in terms of our meat supply." (Daniel Acker/Bloomberg via Getty Images)

Sullivan’s statements came after the company’s pork-processing plant in Sioux Falls was forced to close on April 12 after hundreds of its approximately 3,700 employees tested positive for COVID-19. According to Smithfield, this one plant alone accounted for “4 to 5 percent” of the entirety of U.S. pork production.

Smithfield has originally intended to suspend operations for only three days when the plant first closed on Thursday, but extended the suspension indefinitely on Sunday, just one day after both the South Dakota governor and the Sioux Falls mayor urged the plant to close for at least 14 days.

Smithfield isn’t the only major meat-processing company that has been forced to close its U.S. production plants in response to the COVID-19 health crisis. Weeks ago, a Perdue Farms processing plant in Delaware temporarily closed for a “top-to-bottom” cleaning after employees fell ill with the novel coronavirus, the Cape Gazette reported. A Tyson Foods facility in Iowa was also forced to suspend operations after more than two dozen workers tested positive. And another Tyson facility is under investigation following an outbreak in Tennessee.

It’s not just the shuttered plants that pose a risk for the U.S. meat supply. Employees at some of these facilities are increasingly voicing their concern and staying home from work. In Colorado, for instance, nearly a third of the workers at JBS USA, a beef processing plant in Greely, and the largest employer in its county, had elected to stay home following an outbreak of coronavirus.

The JBS USA plant in Greely has since temporarily closed, following the death of two employees who worked at the plant, the Greely Tribune reported.

While production slows, demand for meat is also falling overall amid the pandemic, although not in the supermarkets: Cuts of meat that are more often served in restaurants — steaks, chicken wings, etc. — are seeing the largest declines, while those sold in the meat aisle are in much shorter supply. And coronavirus-prompted closures could further complicate matters, said Christine McCracken, animal protein analyst for Rabobank, a Dutch banking organization, Reuters reports.

Meat production facilities, meanwhile, are instituting new measures to try to keep employees safe during the pandemic — like installing sanitizing stations, plexiglass barriers, or sending home high-risk workers — though some claim their efforts are too late.

"My life is in jeopardy because we're working elbow to elbow," said Mona Darby, an employee at the Wayne Farms chicken-processing plant in Alabama, where workers reportedly pay 10 cents per day to buy masks to wear while working, according to Reuters. (A representative for the company told Reuters he was not aware of anyone being charged for masks.)

A spokesperson for a union of pork-processing employees at the Olymel plant in Quebec, Canada, said members didn’t think the company had done enough to keep them safe ahead of a coronavirus outbreak at the facility, either.

Sullivan, of Smithfield, however, said in the Sunday statement that despite the challenges the meat industry is currently facing, meat-processing workers are essential for the nation’s food supply.

“We have continued to run our facilities for one reason: to sustain our nation’s food supply during this pandemic,” he said. “We believe it is our obligation to help feed the country, now more than ever. We have a stark choice as a nation: we are either going to produce food or not, even in the face of COVID-19.”

“We believe it is our obligation to help feed the country, now more than ever," the CEO of Smithfield Foods said Sunday. "We have a stark choice as a nation: we are either going to produce food or not, even in the face of COVID-19.” (AP Photo/Stephen Groves)

Smithfield Foods will be closing its Sioux Falls plant indefinitely starting Tuesday, after processing some meat it already has “in inventory.