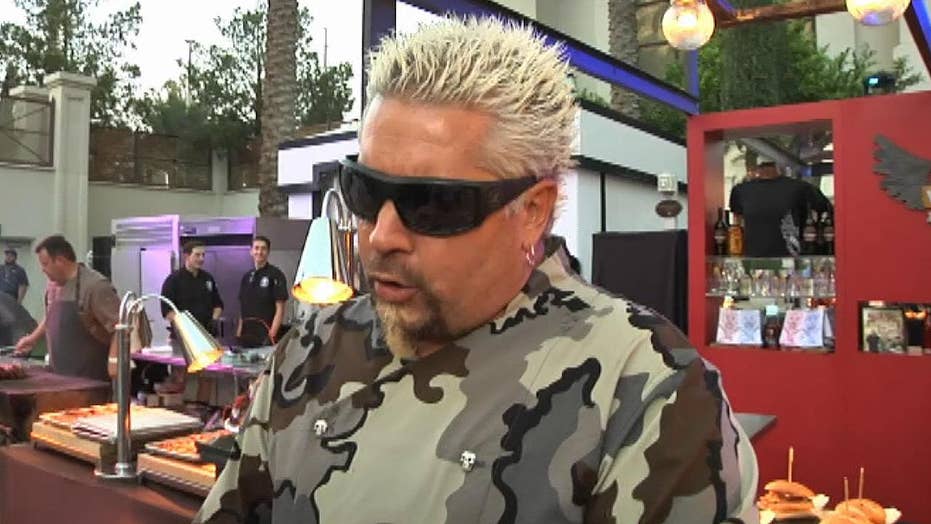 Guy Fieri gets his star; Paul McCartney his the road

Hollywood Nation: Celebrity chef Guy Fieri will be honored with a star on the Hollywood Walk of Fame; Paul McCartney kicks off his 'Freshen Up' tour in New Orleans.

No eggs for this Guy.

Food Network star Guy Fieri has become a household name for his “Diners, Drive-Ins and Dives” show (AKA Triple D), which has him touring all over the country discovering local popular greasy spoons. But the over-the-top chef, who samples things from classic American fare to international cuisine, won’t eat just anything.

“Liver is nasty,” Fieri told People in an interview. And eggs “I eat them in dressings, but sunny-side up, over-easy or scrambled? No, thank you.”

Food Network star Guy Fieri has become a household name for his “Diners, Drive-Ins and Dives” show (AKA Triple D), which has him touring all over the country discovering local popular greasy spoons. (Reuters)

The iconic chef also has a very specific morning habit when he’s on the road filming the alliterative program.

“I usually exercise before work. Then I drink a big vegetable and fruit juice — we bring a juicer on the road,” he said to People. “I make everybody drink it because I know the immunity, and what the body needs when everybody’s on the road, and working crazy hours.”

“When you do three locations in a day, two dishes per location, it can very quickly escalate,” he added. “If you eat too much, and you get too much in your mouth, you overload your palate, you desensitize it. I don’t wanna do that.”

Fieri, who reportedly pairs his green juice with a daily Americano, picks the restaurants and dishes that are featured — and usually goes for options that are more unusual.

“Guy will spot a unique ingredient or a way of preparing a dish that’s different and chooses that,” executive producer Frank Matson told People.

As long as the unique ingredient doesn’t turn out to be liver, or eggs, it seems.