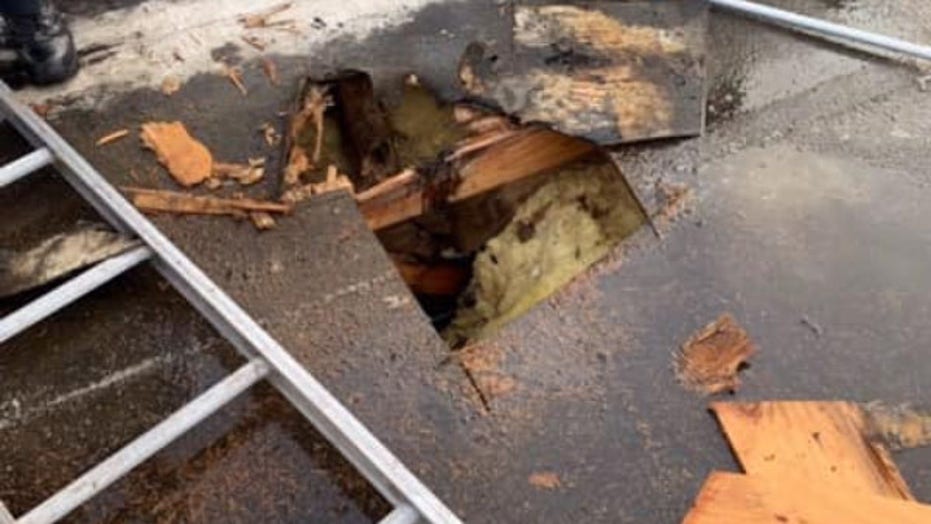 A strange scene unfolded at a Texas Burger King when the local fire department was called to rescue a worker who apparently fell through the roof and got his leg stuck.

The Gun Barrel City Fire Department arrived on the scene around 7 a.m., CBSDFW reports. At the restaurant, they discovered that the worker’s leg had fallen completely through the roof and was wedged tightly. The emergency workers were unable to free him without the use of special equipment.

Before they could get to work, the rescue team had to check the area around him to make sure that it was stable. Once that was done, they were forced to cut through the roof and clear up the area around the victim. They then discovered that his leg had become wedged between two trusses.

Firefighters were forced to cut out a section of the roof to free the employee. (Gun Barrel City fire department)

After cutting through one of the trusses, they were finally able to free the victim, who was then lowered to the ground via rope harness. EMS workers then checked him over before taking him a nearby hospital.

The Gun Barrel City Fire Department posted pictures of the rescue to Facebook. “Given the serious nature of the call when it was received by our Dispatch Center, two Fire Engines and our Ladder Truck, along with Fire Fighters from both stations, were sent to the scene," assistant chief Jason Raney wrote in the post.

"I want to compliment our personnel on the scene, along with the Police Department who responded, for getting the victim out in a safe and expeditious manner. This rescue was very challenging due to the instability of the roof.”

It has not been reported why exactly the employee was on the roof in the first place. Burger King did not immediately respond to Fox News’ request for comment.