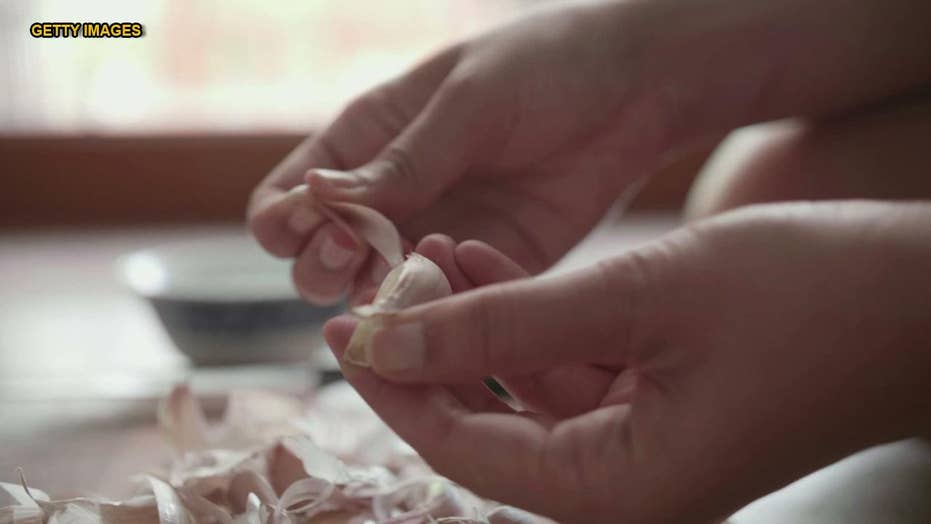 A video posted online shows someone using a knife, or a pointed blade, to stab the individual cloves from the head.

How do you peel garlic?

Professional chefs and at-home cooks swear by many different methods — from shaking garlic in a container to smashing garlic cloves on a cutting board, or by soaking them in water or microwaving them.

HOW TO REHEAT FRENCH FRIES TO THEY DON'T TURN INTO A SOGGY, SLOPPY MESS

But on Sunday, a Twitter user posted an apparently new, or seemingly unknown, way to remove cloves from a head of garlic. A video posted online shows someone using a knife, or a pointed blade, to stab the individual cloves from the head.

"As someone who makes a lot of Korean food, this is the best method for getting garlic peeled!" the person who posted the video wrote.

WHY ONIONS MAKE YOU CRY, AND HOW TO AVOID IT

"What kind of sorcery is this?!!?!?" one user asked, while someone else said their weekend plans would consist of trying this new method — what they dubbed a "culinary moon landing."

"My life just changed forever," another user quipped, while someone else tweeted: "This kind of info exchange is why the internet exists."

Many people said they wished they knew of the garlic-peeling trick sooner in their lives.

"I’m 33 years old. I’ve lost no less than 4 years of my life peeling garlic. It’s too late for me. I hope younger generations can benefit," someone joked.

"Not sure how I never knew about this. I lament when I consider how much more garlic I could have used during all these years had I only known of this technique," another said.

"Time to not think about all the time ive lost peeling garlic in any other way," someone else tweeted.

But others who watched the video were skeptical. One said the garlic-peeling trick "looks like something that doesn't actually work well in real life."

Another, who claimed to have attempted it for herself, said, "We have tried it in our office and it DOES NOT WORK."

In response, another Twitter user suggested she was just using the wrong knife for the job.

"It does [work]!" the user wrote. "You need to use a knife that's not too sharp and a little thicker!"