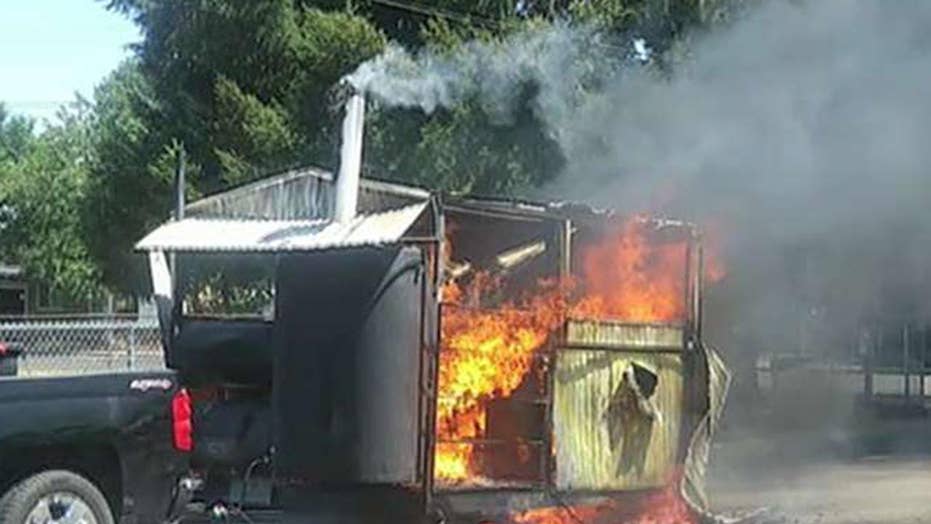 Owners of Squatchy's BBQ Jason and Julie Lorraine on how they've persevered.

Jason and Julie Lorraine are feeling grateful after a GoFundMe page established to replace the fire-ravaged mobile trailer they used in their barbeque business – and livelihood – raised over $25,000 in just two days.

“It’s crazy, the support we've gotten from folks, a lot not even in our area, it’s very touching and overwhelming,” Army veteran Jason told Fox & Friends First on Thursday.

On July 15, the couple, who operated Squatchy’s BBQ in the Portland, Ore. area, were driving to a fundraiser for a family friend who is undergoing heart surgery when they spotted smoke rising from their BBQ trailer hitched to the back of their four-door Chevy pickup truck.

Seconds later, the trailer and attached grill, smoker and miscellaneous equipment ─ including refrigerators, slow cooker and signs ─ went up in flames. The truck also sustained damage, and the couple soon determined insurance would not cover everything.

"The amount of loss is going to be way greater than the trailer itself ... when you're building a food truck you don't think about the amount that goes into it ... you don't picture it going up in flames,” Jason said.

“It was awful. That trailer wasn't just a trailer, it wasn't something we went out and bought, we built it as a family,” Julie agreed.

The fire came as a devastating blow to the Lorraine family, who started the business upon Jason’s retirement from military service. He served for 20 years, completing four tours in Iraq and Afghanistan, before retiring in 2016. Now, his two teenage daughters have enlisted — Kelsey, age 19, is in the Air Force, while Courtney, age 18, leaves for basic training for the Army next week.

Within days of the fire, friends of the Lorraine family and Squatchy’s started a GoFundMe page, which raised $25,194 of a $25,000 goal as of late Thursday morning.

As evidenced by the comments section of the crowdfunding page, fans of the affectionately nicknamed “Squatch Shack” are eager to help them get back on their feet.

“Your story moved us. Good luck & God bless you and your family,” one fan wrote.

“Thank you for your service to our country. And to your wife as well, because I know when one family member serves, the entire family serves. I will look you up if I'm ever in your area and try your BBQ,” another supporter chimed in.

“It’s not just about us, and our business, we're just a small family-owned and operated food truck ... that’s what it’s about, getting up and running again,” Julie told Fox.