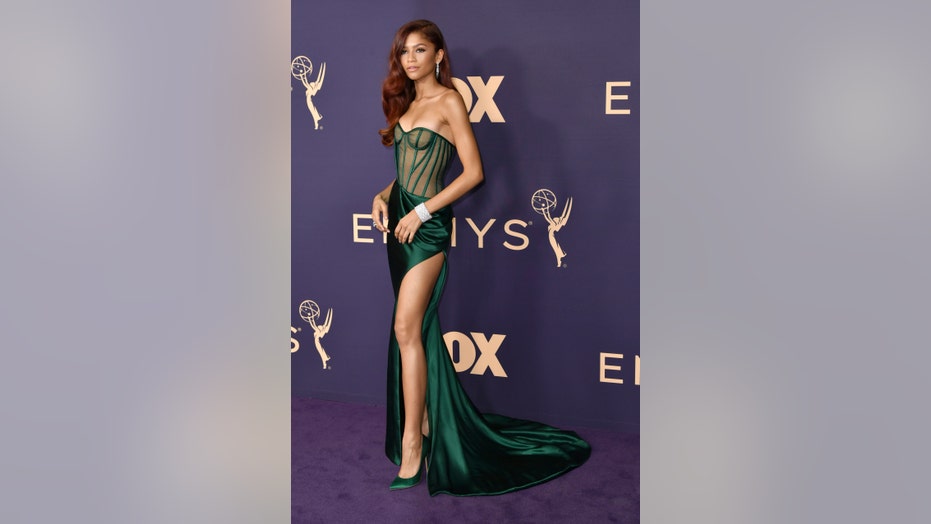 Zendaya has everyone feeling euphoric as she showed up to the Emmy Awards in a stunning, sheer emerald green corset gown.

The "Euphoria" actress, 23, brought her magic as she wowed the crowd in her custom Vera Wang dress, which was a one-shoulder dress that featured a sweetheart neckline with a sheer bodice, accompanied with a one-sided thigh-high slit.  She accessorized her dress with fiery red, wavy hair put to one side.

The actress, who is a presenter at the 71st Primetime Emmy Awards, glammed up her outfit with matching green Brian Atwood pumps, a cuff bracelet and emerald and diamond drop earrings.

Earlier this month, the star was rewarded with the Fashion Force Award at the Daily Front Row Fashion Media Awards during New York Fashion Week.

“Fashion I think for me is really just emotional…It’s allowed me to just really say I don’t give a F, you know what I am saying? It’s allowed me to really find out who I am and be more courageous and more fearless,” she said in her acceptance speech.

Zendaya arrives at the 71st Primetime Emmy Awards on Sunday, Sept. 22, 2019, at the Microsoft Theater in Los Angeles. (Richard Shotwell/Invision/AP)

Zendaya has no Emmy Award nominations this year. However, that could change next year, as her show "Euphoria" will be eligible for the award show.

"Euphoria" is an HBO teen drama series about a group of high school students navigating through life intertwined with dramas of love, friendships, drugs, trauma and social media.

The show was renewed for a second season in July 2019.