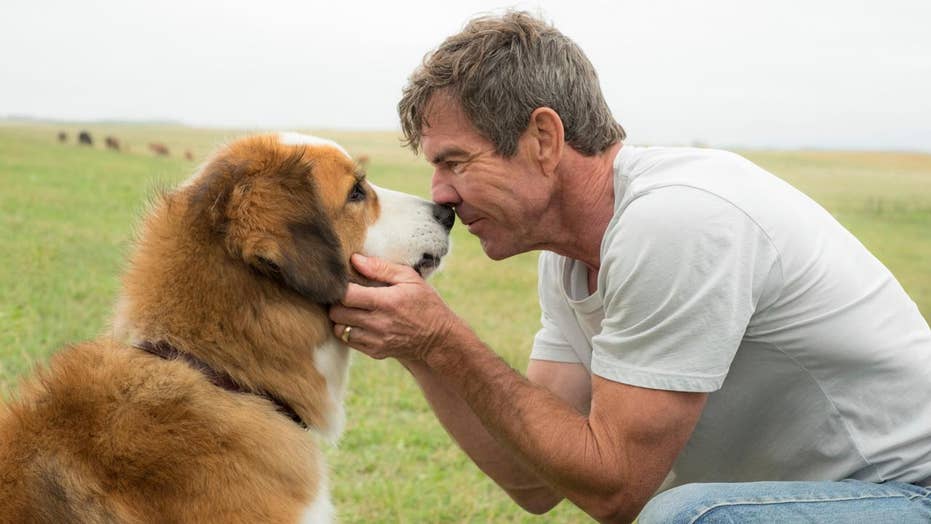 Premiere for ‘A Dog’s Purpose’ cancelled after leaked video shows a dog allegedly being physically forced to perform water stunt against its will. Dennis Quaid, trainers, and film’s writer defend treatment of animals while PETA calls for boycott

Last week, a viral video showed a dog on the set of “A Dog’s Purpose” being forced into a moving body of water during production of the movie. The clip raised questions about the treatment of the animals on the film’s set, and some are suggesting it could shift the way animals fit into feature film productions moving forward.

American Humane, the organization that oversees the treatment of animals on film sets, has launched a third-party investigation to examine what went wrong on the set of “A Dog’s Purpose.”

Still, People for the Ethical Treatment of Animals, which led a campaign to boycott the movie, believes animals should no longer be used on screen at all. A rep for PETA told Fox News animal scenes should be made up solely of Computer-Generated Imagery, or CGI, going forward.

“No amount of spin can erase what people saw in that video,” said Senior VP of Communications for PETA Lisa Lange. “If you can’t do it with CGI, then don’t do. Read the book… It’s just a movie.”

Long-time Hollywood animal trainer Robin Penland-Elliott, of “On the Lamb Herding,” told Fox News that the treatment of animals on sets has evolved through the years.

She said now “many, many hours are taken to train and desensitize all animals to the environment they will be participating in.”

“Not all animals are suited for this work. Not all humans can be entrusted with this training and handling,” she insisted.

Penland-Elliott said she stays attuned to the animal’s needs on set to avoid any potential mistreatment.

"I've used animals in film, TV, music videos many times. I recently provided dogs for a music video. One dog was not comfortable. She was left out of the shoot and will not be put in this environment until more training is done and it's fun for her. It's very simple.”

Whether the TMZ video will change the industry in the future remains to be seen. One Hollywood trainer, who has worked on prominent commericals and films and wished to remain anonymous, told Fox News he believes it's up to American Humane to do a better job to protect animals on sets.

Lange believes that ultimately it’s audiences who will push Hollywood for changes in the use of animals on-screen.

“People don’t want animals hurt for entertainment, proof of that came two weeks ago with the end of the Ringling Bros circus that operated for more than 146 year. Hollywood is already embracing modern, humane approaches to telling stories about animals by using CGI, animatronics and other tricks of the trade that replace animals. That’s the future,” Lange said.