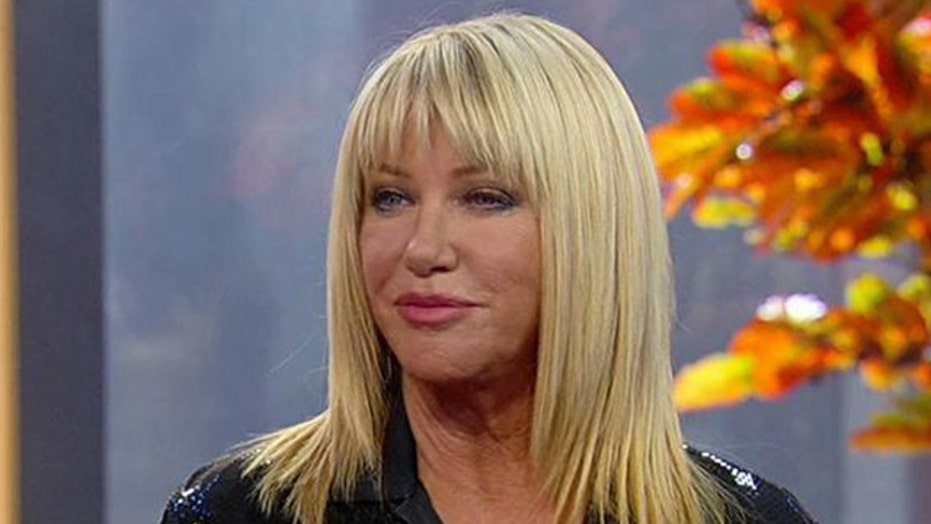 Suzanne Somers gets tangled on 'Dancing with the Stars'

Suzanne Somers was kicked off “Dancing with the Stars” on “Disney Night” Monday after a dress debacle marred her “Lady and the Tramp” routine.

The former “Three’s Company” star’s dance with partner Tony Dovolani wound up looking more like another Disney animated film—“Tangled”—when her heel got caught in her dress!

After her Monday night elimination, Somers, 68, told FOX411, “That was a bummer. That was just one of those things that never entered my mind, never, ever that there would be an issue with the heel getting caught in the hem of my dress. And I couldn’t extricate it.”

Dovolani said during the jazz dance based on the Disney classic, “She looked at me and I was like, ‘Just keep going! I got you!’”

Somers recalled, “He said, ‘Move!’” and then the actress pantomimed how she tried to recover.

But it was all for naught because even though Somers got a respectable 28 out of 40 points from the judges, she was axed from the show due to last week’s performance.

Somers and Dovolani were disappointed when that foxtrot recreating “Three’s Company” and dedicated to her late co-star John Ritter also received a 28 score.

And rehearsal footage aired on Monday night’s show revealed that Somers had moaned to Dovolani in frustration, “I don’t think I can stay on the show ... I’m too lousy at it. I hate it.”

Still, she completed her last dance and the judges praised her effort despite the dress disaster.

Backstage, Somers shrugged, “I think the judges were harsh on us but that’s life.”

The actress, author, and Thighmaster queen also got a side benefit from the competition—an even more toned body.

She also noted of her “DWTS” exit, “If they [were] going to dump me, this probably was a good time” as she needs to rehearse for “Suzanne Sizzles,” her one-woman nightclub show in Las Vegas opening on May 23.

Somers will perform songs and talk about her career “and if you’re in the front row, I’ll be interacting with you,” she said.

And on Tuesday, as Fox411 has previously reported, the sitcom star’s book “TOX-SICK: From Toxic to Not Sick,” about her and husband Alan Hamel’s struggle with mold in their Malibu home, is coming out.

She wants women to know, “There’s a new way to age and that’s what my books are all about and I’m enjoying my life in every aspect of it.”

Somers was thrilled to make a friend in longtime “DWTS” pro Dovolani: “I’m going to miss him ...he’s my father; he’s my son; he’s my teacher; he’s my everything.”

Somers, whose Vegas show is at the Westgate, concluded, “I’m not a dancer, I’m an entertainer.”