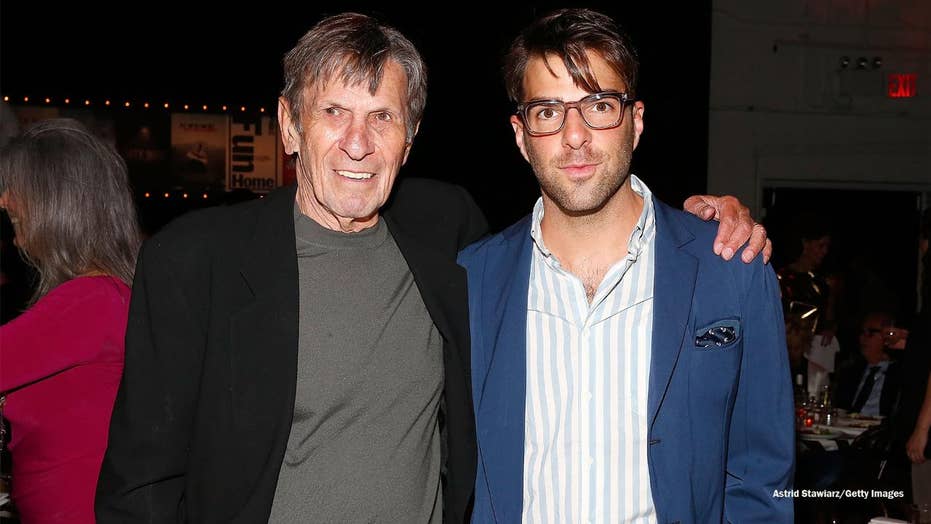 Zachary Quinto is determined to keep Leonard Nimoy’s legacy alive by investigating the great unknowns of our universe.

The 42-year-old, who plays Spock in the reboot “Star Trek” film franchise, is kicking off Season 2 of History Channel’s “In Search Of,” which examines the most iconic mysteries using the latest in science and technology to possibly unveil brand new evidence. The series is inspired by the ‘70s franchise of the same name, which was hosted by Nimoy, who played the original Mr. Spock on “Star Trek.”

Nimoy gave Quinto his blessing to take on his role in the Starship Enterprise before his death in 2015 at age 83.

Quinto spoke to Fox News about taking on “In Search Of,” befriending Nimoy and whether he truly believes there’s life out there.

Fox News: What was it about “In Search Of” that made you want to get involved?
Zachary Quinto: I think obviously my connection to Leonard Nimoy is the main reason that the creators of the show reached out to see if I'd want to host, and also executive produce the show. And that was a big appeal for me. I love Leonard. We became incredibly close in the last decade of his life, and I was always so inspired by his spirit of curiosity and adventure.

And so, the opportunity to carry on his legacy and to continue honoring him through the work that I'm doing is a great gift and I was really happy to step into the role as a result of that. And then, you know, on top of that, these are all incredibly iconic, long-lasting, enduring mysteries that have captivated the curiosity and imaginations of humanity for generations.

Fox News: What's the biggest life lesson Leonard gave you?
Quinto: I think the things that I learned from Leonard were by observing him. They weren't things that he told me explicitly, but just observing the joy with which he lived his life, and the curiosity. You know, his intellect was as sharp at the end of his life as it was at the prime of his life, and I have tremendous respect for that.

You know, that he was constantly engaging intellectually and creatively, and working to bring joy to his own experience and to the lives of the people around him. And I think watching that was something that really left an indelible mark on my own experience.

Fox News: What do you hope audiences will get from Leonard's legacy?
Quinto: I think it comes back to his spirit of intellectual curiosity, and that's something that I really try to infuse my version of the show with and feel his hand on my shoulder as I'm doing it.

Fox News: Which unsolved mystery chronicled in Season 2 would you say left you feeling completely perplexed and why?
Quinto: Surprisingly, I would say all of them had an element that was both unexpected, surprising, and really exciting to me. When they first came and said we're doing a two-part episode on the Loch Ness monster, I was like, "Guys, how could we fill that time?" But you know, we were able to, and not only were we able to, but we were able to in a way that left me engaged and curious.

I'm a big fan of empirical evidence, and so, I sometimes have a hard time getting on board with theories that aren't proven, but I think we moved the dial enough on each topic that I would be more than willing and able to revisit it at some other time and continue the conversation and continue the exploration.

So, I think that's a testament to not only the team of producers and our director who were shaping these interviews and exploring these mysteries, but also to the mysteries themselves and the fact that until we drag a creature up out of the Loch Ness, I think humans will be endlessly curious about what that creature or creatures might be. And so, I feel like there's some part of each of these episodes that drew me in in a way that I didn't expect and in a way that I was really grateful for.

Zachary Quinto as Commander Spock and Chris Pine as Captain James T. Kirk in the 2013 movie, "Star Trek: Into Darkness." Release date May 16, 2013.  (Photo by CBS via Getty Images)

Fox News: Have you ever had your own encounter with the unexplained?
Quinto: Good question. I think I've certainly had experiences that, you know, may touch on some kind of ... Like, the spiritual realm. I don't know. Just moments of encountering energy or encountering an experience that I couldn't necessarily account for at the moment. But yeah, I'm always open to it. I'm always into what's beyond our realm of understanding. So, I welcome those experiences. They don't scare me as much as they intrigue me, for sure.

Fox News: Do you think there's life out there?
Quinto: Well, I mean, even subsequent to us filming this season of the show, there's been more information coming out from the U.S. military of actual footage and experiences that Air Force pilots have had, of unidentified flying objects. You know, I feel like the notion that we in the infinite expanse of the universe, the notion that we, on this tiny little speck of a blue dot revolving around a star are the only intelligent lifeforms, is really absurd, actually.

LEONARD NIMOY, WHO DIED AT 83, GETS VULCAN HAND SALUTE FROM SPACE STATION

So, while we might not yet have encountered intelligent life in other aspects of the universe, I think it's probably as safe a bet as any that it exists in some form out there somewhere. When you consider how little of the observable universe we're actually about to explore in-depth, I think it's not only ignorant but a little bit arrogant, to think that we're the only advanced life form out there. So, I'm fascinated by that exploration, among others, and would be really interested to see some kind of interaction at some point in the advancement of our civilization.

Fox News: What has kept you going as an actor?
Quinto: My experience of the people I get to work with, I think, is probably the most exciting aspect of my life. But you know, in addition to my life as an actor, I also have a production company and I'm developing a number of different projects in film and television both scripted and unscripted, and podcasts, and theater. So, I just want to be creative, and I want to be engaged, and I want to be active, and I want to be contributing to the creative conversation in our culture. That's something that I feel really grateful to have the opportunity to do and I want to continue to do it as long as I can.

"In Search Of" airs Friday at 10 p.m. on History Channel.