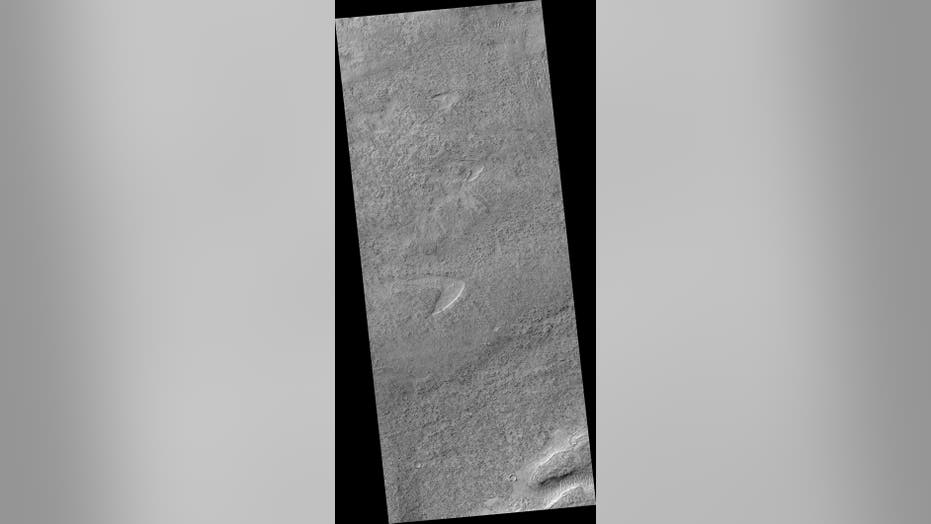 Set phasers to be stunned.

The Mars Reconnaissance Orbiter (MRO) has taken a picture of a dune on Mars that looks strikingly like the Starfleet logo.

The image was captured by the MRO's HiRISE (High Resolution Imaging Science Experiment) camera. The University of Arizona, which manages the camera, noted the similarities to the iconic logo.

LIFE ON MARS? 'FETTUCCINE' ROCKS COULD BE 'OBVIOUS SIGN OF LIFE'

"Enterprising viewers will make the discovery that these features look conspicuously like a famous logo: and you’d be right, but it’s only a coincidence," the university wrote in a statement.

William Shatner, the actor who played Captain James Kirk on "Star Trek," also had a bit of fun with it, calling out Star Wars as Star Trek "made" an appearance on the Red Planet first.

The dune was created by lava flows and wind long ago on Mars, after the lava solidified and the wind shaped it.

"Eventually, the sand piles that were the dunes migrated away, leaving these 'footprints' in the lava plain," the university added in the statement. "These are also called 'dune casts' and record the presence of dunes that were surrounded by lava."

The dune on Mars is not the only Star Trek reference seen in space recently.

In September, a real-life "Planet Vulcan" was spotted 16 light years away from Earth. The planet is associated with the real-life star 40 Eridani A, a star that was connected to Vulcan in the publications 'Star Trek 2' by James Blish (Bantam, 1968) and 'Star Trek Maps' by Jeff Maynard (Bantam, 1980).”

A previous version of this story said William Shatner appeared in "Star Trek Enterprise." He appeared in the original "Star Trek." Fox News regrets this error.