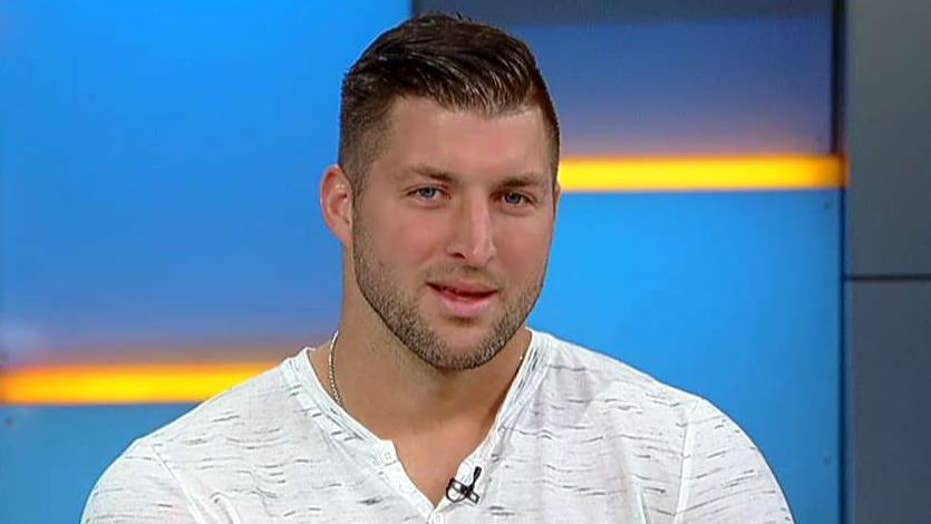 It's only fitting that former NFL star Tim Tebow would talk about how he proposed to his fiancee, Demi-Leigh Nel-Peters, on their first Valentine's Day as an engaged couple.

The former Heisman Trophy winner and two-time college football national champion said he planned dozens of surprises for the former Miss Universe 2017 when he popped the question with a 7.25-carat ring in January.

"And thankfully we pulled it off," Tebow, 31, told "Fox & Friends" Thursday morning.

With all the things going on in his life -- from being an executive film producer of "Run the Race," a host for Lebron James' show, "Million Dollar Mile," which debuts in March, and playing for the New York Mets minor league team -- he said his engagement is the best news of it all.

"You know the thing about surprises, you have to lie a lot to set it up," the outspoken Christian philanthropist added. "I didn't like that."

Tebow secretly flew her family from South Africa to his family farm outside Jacksonville, Florida, where he got down on one knee under a wooden archway. Then her favorite South African artist, Matthew Mole, played "The Wedding Song" for them as they danced.

"I surprised her with her family and best friends," he said. "It was just incredible."

The newly engaged couple celebrated Tebow's "favorite night of the year" together last Friday. Nel-Peters said it was the reason they met, as she has a sister with special needs who participated in a "Night to Shine" in South Africa. Before she knew him as her fiance, she called him the "Night to Shine guy."

When asked if he calls her "Miss Universe," he said: "She's my universe."

The two gushed about their engagement in January on Instagram when they first revealed the big news.

"Any dreams I've ever had, you've exceeded them all! I love you and I can't wait to spend forever with you!" Nel-Peters, 23, wrote.

Tebow said, "Thank you for saying YES and making me the happiest man in the world. You’re the love of my life, and I can’t wait to spend the rest of my life with you."

He told "Fox & Friends" they haven't set a date yet because it's been a whirlwind.