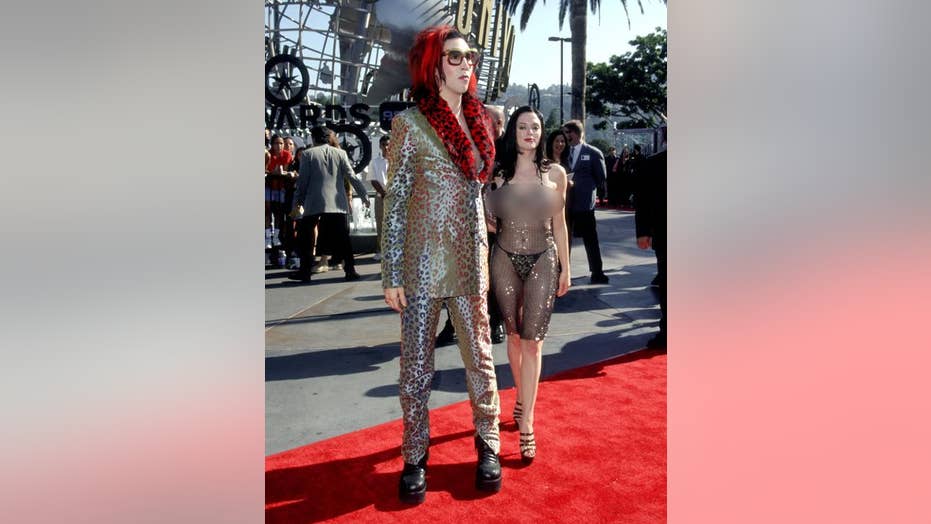 Rose McGowan shares her inspiration for wearing iconic outfit in 1998

Rose McGowan reveals the motivation behind her decision to wear a sheer beaded gown to the 1198 MTV VMA's. The actor and activist says it was in response to an alleged rape by disgraced Hollywood mogul Harvey Weinstein.

More than two decades later, Rose McGowan admitted there’s a reason why she bared all at the 1998 MTV Video Music Awards.

The actress stunned viewers when she arrived at the red carpet of the televised ceremony with then-beau Marilyn Manson wearing “the naked dress” — a sheer black shimmery beaded gown with a leopard thong.

ROSE MCGOWAN HITS BACK AT CRITICS

“I [wore] that for a reason,” the 45-year-old told actress Jameela Jamil for her “I Weigh” interview series. “It was my first public appearance after being raped.”

“And I thought, it was kind of like Russell Crowe and ‘Gladiator’ when it comes out in the ring and he’s like ‘Are you not entertained?’” continued McGowan. “And that was why I did that. That was my response to being assaulted.”

McGowan was one of the first women to speak out in The New York Times and The New Yorker in October 2018 when news broke about Hollywood producer Harvey Weinstein’s decades of alleged sexual misconduct and assault. She claimed the now-67-year-old raped her at his hotel during the Sundance Film Festival in 1997. Weinstein has denied the allegation.

The fallen producer has since been accused by more than 60 women, and currently faces a potential life sentence.

However, this isn’t the first time McGowan has commented about her risqué fashion choice.

In 2018, The Hollywood Reporter shared that during a publicity tour to promote her memoir “Brave” and limited E! series “Citizen Rose,” McGowan stopped by “The Dr. Oz” show and revealed the dress was a silent form of protest.

"It was after I wore the crazy dress, right? But that crazy dress ... and I talk about it in the book, why did I wear that? That was my first public appearance after being sexually assaulted," she told Dr. Oz at the time. "I was like, 'Is that what you want?'"

While some had suspected McGowan was attempted to merely flaunt her assets alongside the shock rocker, she insisted that was not her intention.

"I've never worn something like that before or since," she explained. "That was a political statement. … Of course, there was no Twitter at the time or Instagram, no way to speak for yourself."