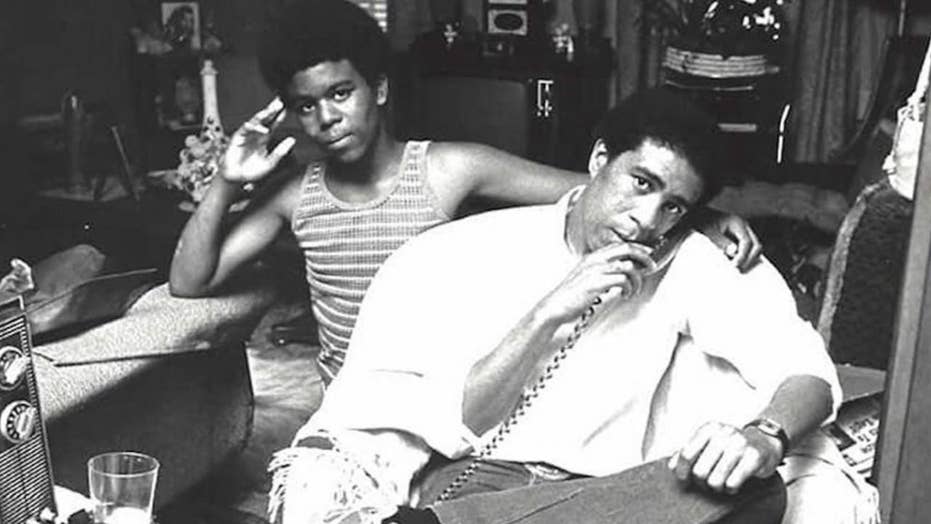 Richard Pryor Jr. recalls growing up with his famous father, overcoming drug addiction: ‘I was so far gone’

Richard Pryor Jr. tells all in a new memoir titled 'In a Pryor Life' about living with a famous father, coming out as gay, and battling drug addiction.

Richard Pryor Jr. was just 6 years old when he realized his father, comic legend Richard Pryor, was different from other fathers.

The 58-year-old was raised in Peoria, Ill., by his mother Patricia Price, the comedian's first wife, while his father was away on tour. But whenever the star would come home to visit his first-born son, Pryor Jr. noticed his family acted strange.

“I remember my relatives would act frantic whenever my father would visit me,” Pryor Jr. told Fox News. “The energy was different. I didn’t know what he did, but I knew it was something different. I didn’t realize that thing was celebrity until I was probably around 12 years old… And I knew I couldn’t listen to his albums or anything. I would have to sneak out and do what I had to do so I could listen to exactly what I wasn’t allowed to hear."

Pryor Jr. is gearing up to release his memoir titled “In a Pryor Life,” which chronicles what it was like growing up with the stand-up icon and how he conquered his own personal demons.

Richard Pryor passed away in 2005 at age 65 from a heart attack after his health had been in decline for many years.

Pryor and his first wife called it quits in 1961. Still, Pryor Jr. said he had a wonderful relationship with his famous father, who showed a completely different side to life. As for his mother, Price ensured that she never let Richard’s fame get to her child's head.

“Whether it was summer or just vacations, I always spent time with my dad in California,” Pryor Jr. explained. “He had a cook and a housekeeper. You didn’t have to pick up after yourself. I would go see him perform in his comedy shows. I would be backstage whenever he was on Johnny Carson.

"But then coming home, my mother would go, ‘Take out the garbage.’ So I got the best of both worlds without the stigma of being this little rich kid. My mother kept me very, very grounded. So when I would go see my dad and stay with him, I didn’t take things for granted. I knew I had to work for what I wanted. I didn’t expect any handouts.”

Unlike Pryor Jr., the comedian had suffered from a tumultuous childhood. He grew up in a brothel ran by his grandmother in Peoria. His mother was a prostitute and his father worked as a pimp. As a child, he was sexually molested by a local teenager. He was expelled from school in the eighth grade and later joined the Army, where he served in Germany. The New York Times reported he was discharged after stabbing another serviceman during a fight.

Pryor Jr. said his father resorted to drug use to cope with his traumatic past.

“I’ve always been around drugs,” he said. “Especially with my dad’s side of the family. There was always marijuana around. I don’t remember when my dad was doing coke, but there were times when I would see bags, not really knowing what it was. And I’m not talking about little bags. I’m talking about sugar bags. You always saw these things around. And in Hollywood, especially in comedy clubs, it was always present. It was always in your face.”

The New York Times shared that in 1978, a court ordered Pryor to seek psychiatric care and make restitution after a New Year’s Day incident in which he rammed his Mercedes into a car containing friends of his then-wife and then shot at it with a pistol.

Then in 1980, after a marathon drug binge, Pryor seriously burned over half of his body while freebasing cocaine. The paper shared paramedics found him walking in a daze more than a mile from his home outside Los Angeles with third-degree burns.

“I was in Illinois and I heard it on the radio first before I was notified,” said Pryor Jr. “I was driving in my car and it just came out on the radio. I rushed home and then the phone calls started flooding. I thought my father was not going to be with us. I truly believed I was going to lose my dad. That I would never see him again… A lot of us didn’t think he would survive that. Being burned over 50 percent of your body? It was very difficult.”

Pryor was hospitalized for almost two months. Pryor Jr., who rushed to be by his father’s side, admitted he struggled to watch the beloved patriarch in agony.

“He would just lay there as his skin would fall on the bedsheet,” he recalled. “My take is that he was trying to end his life. There’s only so much we can take and handle. I think he was trying to escape from pain and not being happy. Most times when people are continuously using drugs, they’re trying to cover up something and make themselves forget what they’re going through… You can have all the money in the world, but if you’re not happy, you really have nothing.”

Richard Pryor, then 39, said he was "just happy to be alive" during an interview on Johnny Carson's "Tonight Show." It was his first performance since he was released from the hospital six weeks prior. — Getty

Like his father, Pryor developed a passion for performance. After high school, he found work in commercials and as an extra. While he attempted stand-up comedy in his early 20s, Pryor was expected to be just like his father or he was ridiculed on stage.

In 1981, Pryor Jr. entered the Navy. It was also that same year when he came out to his parents.

“My father was always calm,” he said, describing how he told his parents that he was gay. “But I understand now that when my father was upset at things, his calmness, that’s what you would see. You wouldn't see a lot of reaction. But he told me to be the best person I can be in my life, no matter what I was doing. My mother went through a period where she thought, ‘Did I raise him wrong?’ But it was nothing that she did. It was just who I am.”

Pryor Jr.’s yearning to entertain never left him. During his time in the military, Pryor performed in drag and following a few years on and off. In the late ‘80s, he performed again, but word quickly spread through tabloids. In response, Pryor told his son “Whatever you do, be the best at it.”

Pryor said he idolized his father — so much so that he followed his footsteps in a devastating way. By his 20s, he was also using drugs.

“The very first time, I called him up with a needle in my arm,” he said. “I was shooting cocaine in my arms. I didn’t know what I was doing. But he was really calm about it. It infuriated me because I wanted him to yell. And he wasn’t doing it. … He was probably high himself during that same time… He was just like, ‘Son, it’ll be OK. It’ll be alright. Just trust me, it’s gonna be OK.”

Pryor Jr. was given the chance to work alongside his father in 1987’s “Critical Condition.” But by then, drugs had taken full control of his life.

“I was so far gone,” he recalled. “I was doing cocaine every single day and then valium on top of it. I used cocaine to be productive, and valium to bring me down. We filmed in this abandoned hospital and I remembered I had drugs hidden on every floor. I would just do drugs over and over. It consumed me. Finally one night, I called my dad and told him I needed help."

The comedian, along with his assistant/bodyguard, helped packed Pryor Jr.’s belongings from his hotel room. He was then flown to a Los Angeles drug treatment center from North Carolina where the film was being shot. Pryor said at one point his heart stopped after given a sedative.

“I remember the nurses on top of me pumping my heart and calling me to come back,” he said. “It’s a blessing I’m still here.”

During the ‘80s, Pryor was a box office sensation, but he was faced with his own drug and health woes. In 1986, he began suffering from multiple sclerosis, a disease that impacts the central nervous system. By 1992, he struggled to deliver his lines and was no longer able to stand on stage.

Pryor Jr. last saw his father in January 2005 before his passing that December.

“It was bittersweet,” he said. “He was happy to see me. I felt the peace between us. But I knew in my heart and in my spirit, it was the last time I would see him alive.”

Today, Pryor Jr. said he still pursues performing and is determined to keep the legacy of his father alive. And as for that rumor from 2018 alleging Pryor slept with Marlon Brando? Pryor Jr. said it’s completely false.

“There’s no way I believe in that,” he said. “And whoever said it, I just don’t buy it. It’s not like my dad hasn’t done things. But that particular story? I don’t believe it at all.”

Ultimately, Pryor Jr. hopes his story will inspire readers to seek help for the issues plaguing their own lives.

“I went through a lot of things in my life and I finally found balance,” he said. “… I wanted people to know the struggles I went through. Maybe someone can identify with my story and feel inspired to change their lives, to live better.”