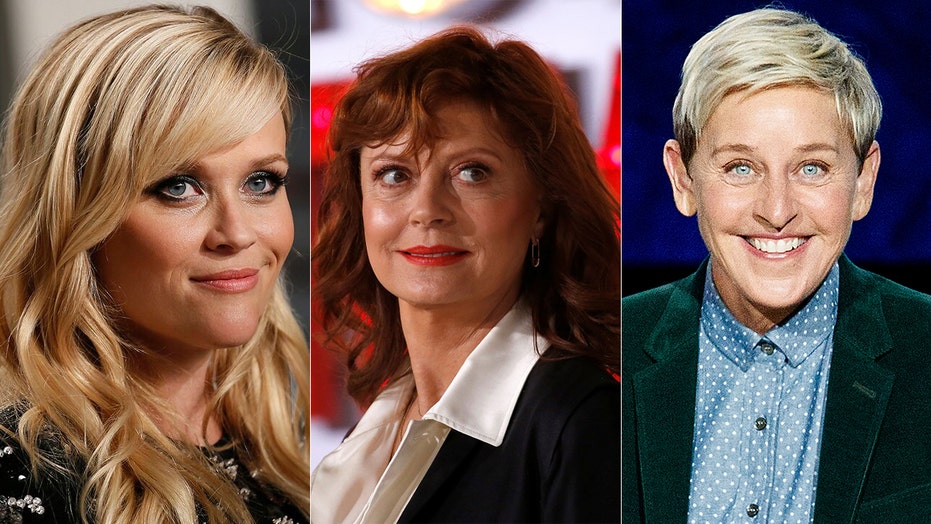 This weekend, DeGeneres, 61, took heat on social media for attending a Dallas Cowboys game with Bush, 73. On Tuesday's episode of "The Ellen DeGeneres Show," DeGeneres addressed the backlash.

"Thelma & Louise" star Sarandon tweeted a quote from Out Magazine's response to DeGeneres' statements, highlighting a portion that read: “But missing the point entirely, DeGeneres framed the issue as simply a matter of her hanging out with someone with different opinions, not a man repeatedly accused of being a war criminal.”

Sarandon, 73, wasn't the only celebrity to speak out, however. Actresses Witherspoon, 43, and Bell, 39, voiced their opinions in support of DeGeneres. The two are now being called out for backing the "Finding Dory" star.

"Thank you for this important reminder, Ellen!" the "Legally Blonde" star wrote in response to DeGeneres' comments, in a tweet that she apparently deleted later.

One Twitter user commented on Witherspoon's tweet, saying: "The privilege reeks. There are thousands of people in the middle east that don't get to be friends with people with 'different views' because they're dead thanks to him. And he spent his presidency trying to strip away LGBT rights, so nah. This monologue is pure class privilege."

LAWRENCE JONES ON BACKLASH AGAINST ELLEN DEGENERES: THE TWITTER MOB TURNED ON HER

Other responses read: "it is a privilege to be able to set aside the real life harm and oppression bc it does not affect you and befriend someone like that" to "Reese no" and "Reese, I 💓 you, but honey, this ain't it."

Meanwhile, Bell posted a side-by-side picture of DeGeneres and Bush on Instagram, saying, "She's my 👑👑👑👑👑👑👑👑👑"

Several people commented on the post. Among them were people calling for the post to be deleted and pointing out what they called Bell's "privilege."

"Why are celebs using this as an opportunity to let their privilege jump out," one user wrote.

Another said: "He orchestrated an unnecessary war that killed thousands and supported Kavanaugh's confirmation and is anti-gay marriage. Yes it's important to have relationships with people who don't only agree with you, but it is absurd to frame it this way."

"President and Mrs. Bush really enjoyed being with Ellen and Portia [de Rossi] and appreciated Ellen’s comments about respecting one another. They respect her," Bush's spokesman, Freddy Ford, told Fox News on Tuesday.

Yet another celeb has jumped into the fray: Mark Ruffalo.

In a tweet, Ruffalo condemned DeGeneres' comments, saying, "...Until George W. Bush is brought to justice for the crimes of the Iraq War ... we can’t even begin to talk about kindness."