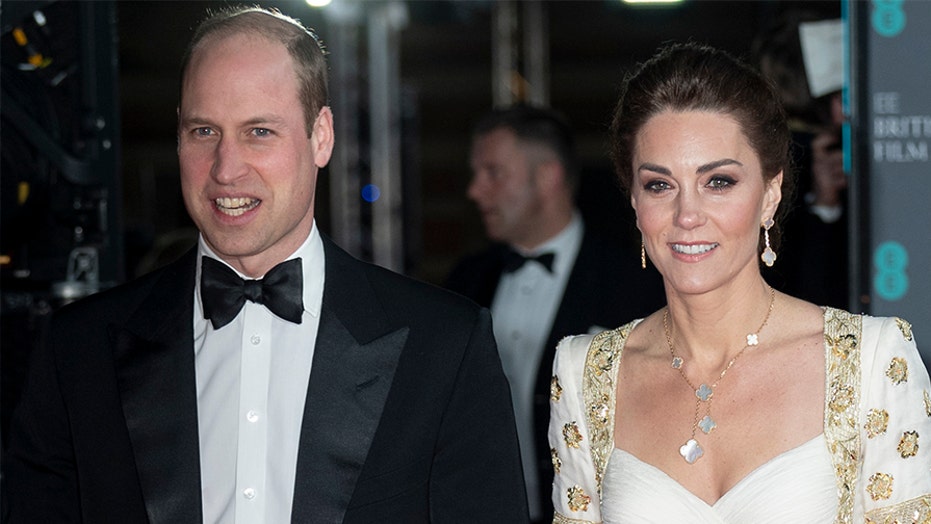 Prince William and his wife Kate Middleton were apparently not prepared for the shocking jokes made by Hollywood about their family.

The Duke and Duchess of Cambridge walked the red carpet for the BAFTAs (British Academy of Film and Television Arts) at London’s Royal Albert Hall Sunday night.

The ceremony is noted for being Britain’s equivalent of the Oscars. It is the fourth consecutive year the British royal couple has attended the ceremony. It is also William’s 10th anniversary as BAFTA’s president.

William, 37, and Middleton, 38, sat front row and appeared tense at the ceremony as stars such as Brad Pitt and Rebel Wilson poked fun at “Megxit” and Prince Andrew.

PRINCE WILLIAM WANTS TO GIVE HIS KIDS ‘A NORMAL CHILDHOOD WITHOUT THE CONFINES OF ROYAL LIFE,’ EXPERT SAYS

“The feedback is that many of the stars stepped out of line in front of the patron, which is the Duke of Cambridge,” U.K. media commentator Neil Sean told Fox News. “William is a huge supporter of films and spoke openly in his speech about the lack of diversity at the awards.”

Sean noted the star who “offended the most” was Wilson, who had no problem poking fun at recent royal controversies. The Australian actress, who took to the stage as a presenter in the “Best Director” category, was quick to crack jokes that drew gasps from the audience.

“It is really great to be here at the Royal Andrew… uh, Royal Harry, no, at this royal palace place,” the 39-year-old quipped, referencing William’s uncle and younger brother, respectively.

The camera then immediately cut to William and Middleton who looked visibly uncomfortable by the commentary.

Following a disastrous interview with the BBC about his relationship with accused pedophile Jeffrey Epstein, Andrew announced in November 2019 that he asked his mother Queen Elizabeth II if he can “step back” from his public duties.

As for Harry, 35, the prince and his wife Meghan Markle announced in January that they will take “a step back” as senior members of the royal family and instead work independently, splitting their time between the U.K. and North America.

Pitt also poked fun at “Megxit” while having Margot Robbie accept his award for best-supporting actor.

The 56-year-old was unable to attend the event but tasked his “Once Upon a Time in Hollywood” co-star with accepting the accolade on his behalf and reading a few tongue-in-cheek remarks he had prepared.

“He says that he is going to name this Harry,” said the 29-year-old, holding up the trophy. “Because he is really excited about bringing it back to the States with him… His words, not mine!”

“This was not met with the smiling faces that you saw on the final edited version of the show,” claimed Sean, saying the broadcast had been allegedly edited so that there were minimal reaction shots from the royal couple.

Sean further alleged: "A mole also told me that to ensure that the royals are not embarrassed or made fun of again at such a prestigious event like this one... they will have a ‘moral clause’ inserted into their acceptance agreement ensuring that due reverence is given to the royal couple who gave their time and support to such a wonderful celebration of film and is respected."

However, not every moment at the ceremony was an awkward experience for the pair, Sean insisted.

“I can reveal that Kate loved ‘Judy,’ which starred Renee Zellweger,” Sean said. “[She] told the star and team how much she had enjoyed the whole performance... and in particular, the fact that Renee sang the film songs in character on stage in front of an audience.”

And Middleton supposedly wasn’t the only royal who supported Zellweger’s performance. Sean claimed Prince Philip also enjoyed revisiting his past, saying the Duke of Edinburgh saw the late Hollywood icon live “many times” when she performed in London.

After the ceremony, William and Middleton met the winners of the 27 award categories, including Joaquin Phoenix, who was named best actor for “Joker.”

“Lovely to meet you,” William told the 45-year-old actor, People magazine reported. “I absolutely loved ‘The Joker.’ It was brilliant. I put it off and put it off before watching it, as people kept telling me ‘be careful when you choose to watch it.’ I’m glad I didn’t watch it before bed, but huge congratulations on an amazing performance.”

The outlet said Phoenix praised William for his speech, which addressed the lack of diversity in the awards nominations.