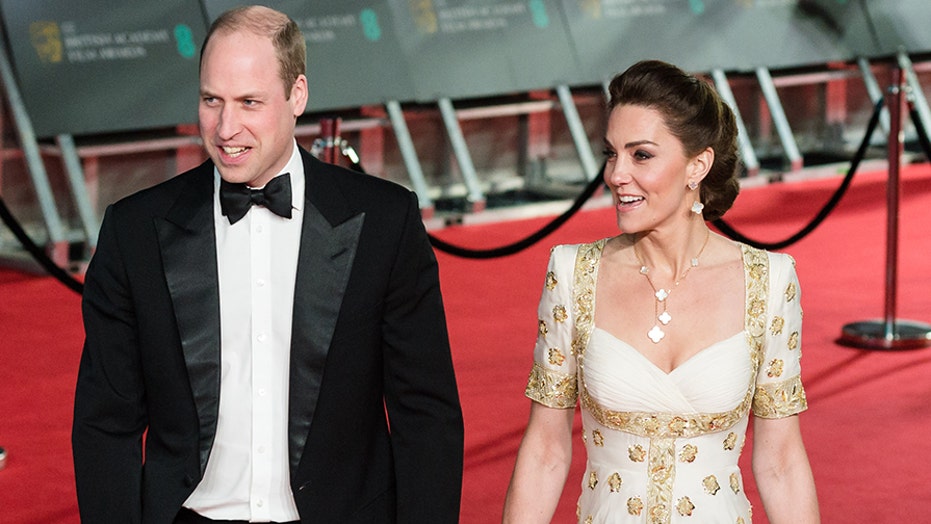 All eyes were on the Duchess of Cambridge during her royal date night.

The outlet noted the evening marked the fourth consecutive year the couple has attended the ceremony. It is also William’s 10th anniversary as president.

After the ceremony, the Duke and Duchess of Cambridge met the winners of the 27 awards categories, including Renee Zellweger, who won the award for leading actress in the biopic “Judy” about late Hollywood legend Judy Garland’s final years.

For the glamorous night out, the mother of three took note of the event’s style guidelines, which encouraged guests to raise awareness on sustainability through their fashion choices.

According to People, all attendees were given a sustainable fashion guide that was created by the London College of Fashion’s Centre of Sustainability. Guests were asked to re-wear, rent or buy vintage.

The 38-year-old wore a flowing gold and white Alexander McQueen gown that she paired with a necklace and earrings from Van Cleef and Arpels, which cost over $15,000, as well as matching gold Jimmy Choo heels.

Middleton, a fan of recycling her wardrobe, wore the same dress for a 2012 state dinner in Malaysia.  The sparkling golden embellishments featured in the dress are in the shapes of a hibiscus, the official flower of Malaysia, Vogue reported.

MEGHAN MARKLE, PRINCE HARRY WOULDN’T BE THE FIRST ROYALS TO BANK ON THEIR TITLES, EXPERTS SAY

Despite her royal title, the British royal is celebrated among style experts for publicly re-wearing her favorite outfits multiple times, including pieces from her pre-wedding days when she wasn’t yet a member of the royal family. Middleton is frequently seen in her favorite pair of casual boots, which are said to be over 15 years old.

“Sustainability is very important to BAFTA, and we’re doing more than ever before,” the academy’s guidelines revealed. “The goal is that the EE British Academy Film Awards 2020 will be carbon neutral, working towards having a net positive impact on the environment.”

The ceremony, noted for being Britain’s equivalent of the Oscars, concluded with William, 37, presenting American film producer Kathleen Kennedy with the Fellowship, BAFTA’s highest accolade.