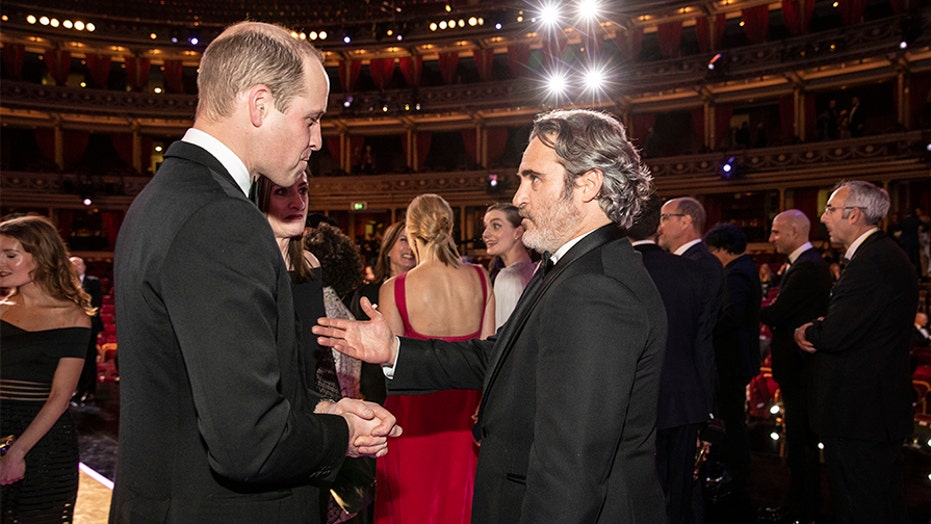 Even royals can get nightmares like the rest of us.

Prince William, who walked the red carpet alongside his wife Kate Middleton for the BAFTAs [British Academy of Film and Television Arts] at London’s Royal Albert Hall Sunday night, was eager to meet Joaquin Phoenix, who was named best actor for “Joker.”

The ceremony is noted for being Britain’s equivalent of the Oscars. It is the fourth consecutive year the Duke and Duchess of Cambridge have attended the ceremony. It is also William's 10th anniversary as BAFTA's president.

After the ceremony, the pair met the winners of the 27 awards categories, including Phoenix, 45.

“Lovely to meet you,” William, 37, told the actor, as reported by People magazine. “I absolutely loved ‘The Joker.’ It was brilliant. I put it off and put it off before watching it, as people kept telling me ‘be careful when you choose to watch it.’ I’m glad I didn’t watch it before bed, but huge congratulations on an amazing performance.”

The outlet noted Phoenix praised the grandson of Queen Elizabeth II for his speech, which addressed the lack of diversity in the awards nominations.

During his opening speech at the ceremony, William stressed the organization would be reviewing their voting process following this year’s show.

“Catherine and I are once again really delighted to join you this evening,” said the prince. “Tonight we celebrate another year of exceptional filmmaking and I’m thrilled that all those involved have been recognized. Both here in the U.K. and in many other countries across the world we are lucky to have incredible filmmakers, actors, producers, directors and technicians — men and women from all backgrounds and ethnicities enriching our lives through film.”

“Yet in 2020, and not for the first time in the last few years, we find ourselves talking again about the need to do more to ensure diversity in the sector and in the awards process — that simply cannot be right in this day and age,” William continued. “I know that both Pippa, Chair of BAFTA, and Amanda, BAFTA CEO, share that frustration and continue to work tirelessly to ensure that creative talent is discovered and supported.

“BAFTA takes this issue seriously, and following this year’s nominations have launched a full and thorough review of the entire awards process to build on their existing work and ensure that opportunities are available to everyone.”

BAFTA faced backlash earlier this month after the awards show nominations were released. Fans pointed out that the list did not highlight non-white actors. In addition, they noticed the list only had male directors.

The nominating committee quickly addressed the outcry, calling it an “industry-wide issue.”

After accepting his award, Phoenix also gave a speech focusing on the lack of diversity on the nominations list.

“I feel conflicted because so many of my fellow actors that are deserving don’t have the same privilege,” he explained. “I think we send a very clear message to people of color that you’re not welcome here. I don’t think anybody wants a handout or preferential treatment. People just want to be acknowledged, appreciated and respected for their work. This is not a self-righteous condemnation. I’m part of the problem.”

“We have to do the hard work to truly understand systematic racism,” he continued. “I think it is the obligation of the people that have created and perpetuate and benefit from a system of oppression to be the ones that dismantle it. That’s on us.”