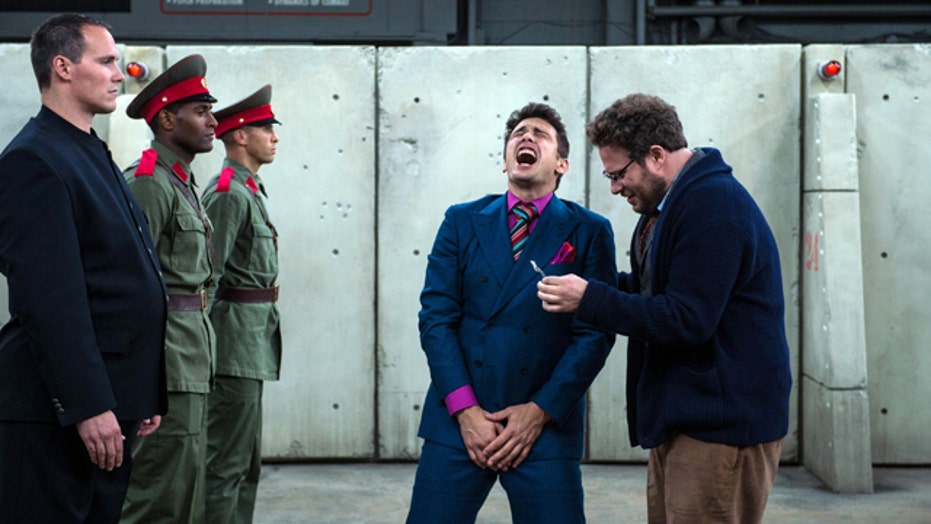 Sony's cancellation of the release of 'The Interview' a victory for North Korea, hackers everywhere

LOS ANGELES – Industry insiders say Sony set a terrible precedent this week when it canceled the release of “The Interview.” They say Sony’s decision paints a bleak future for Hollywood in which major studios, fearful of repercussions, will push further toward extreme political correctness rather than risk offending foreign regimes and dictators.

Sony canceled the film’s release after hackers broke into its computer network and threatened to blow up theaters that showed the movie— a comedy that depicts a plot to kill North Korean Supreme Leader Kim Jong-un. The FBI has traced the terror threat to North Korea, FOX411 has confirmed.

“This move certainly feels like the top of a very slippery slope,” Scott Huver, a Los Angeles-based popular culture expert and writer, told FOX411. “While it is very difficult to fault either Sony or the theater chains for a reluctance to show the movie, it is most certainly a blow to free speech and creative expression — two of America’s most vital guiding principles.

“No matter the quality of ‘The Interview,’ the fact that it now cannot be seen because one outside force imposed their will on the American people with the threat of violence should be heartbreaking to every citizen of this country.”

“You can expect more risky scripts that are critical of governments and politicians to be adjusted and even rejected outright,” he said. “This will almost certainly have a chilling effect on all political movies for the foreseeable future.”

Several theaters, including Alamo Drafthouse Cinema in Austin, Texas, and Capitol Theater in Cleveland, initially announced they would replace “The Interview” with “Team America,” which also lampoons the North Korean dictator. But Paramount swiftly canceled the screenings. And a film starring Steve Carell — an untitled thriller set in North Korea and due to start filming in March — was scrapped.

Hollywood has a long history of making movies that lampoon or criticize other nations and their leaders. Charlie Chaplin’s 1940 film “The Great Dictator” satirized Hitler even before the U.S. entered World War II; 1985’s “Spies Like Us” poked at the Soviet Union and the Cold War; and just four years ago the inflammatory British comedy “Four Lions” took aim at Islamic terrorists.

But could the Sony incident ultimately put North Korea on Hollywood’s “do-not-touch” list? Only time will tell.

Huver says the big studios will probably shy away from hot-button topics that could have major repercussions, but he believes independent filmmakers will take a stand.

“I’d count on many outraged or maverick-minded creatives and professionals seeking to push buttons even further in the wake of this event,” he said.

Some security experts said the hackers’ “success” in the Sony case — breaking into the massive studio’s computer network, revealing embarrassing email exchanges, hurting the company financially and compelling it to cancel a big Christmas release — will have a ripple effect.

“A door has been opened here for future cyberattacks, and the North Korea and United States relationship will be even frostier now,” said Lee Oughton, global risk and security expert. “Watch this space.”