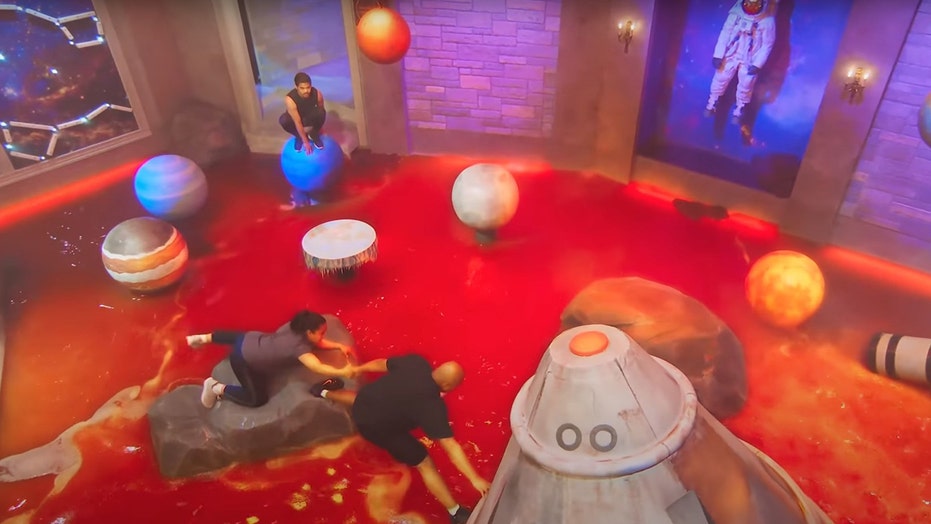 American television is going through a game show boom.

Sure, we generally see an influx of fun and games permeating our living rooms each year as the summer months roll around, but this year seems to have presented us with more bizarre game shows in the vein of what international viewers may be used to in their home countries.

Suffice to say Netflix’s newest offering, “Floor is Lava,” fits right into that rambunctious category and for good reason.

The new reality series from the streaming giant is a childhood favorite supersized into a “Legends of the Hidden Temple” and “Wipe Out” fusion that might have even the most conservative parents rearranging their furniture for some obstacle course fun.

Hosted by “Top Gear” alum Rutledge Wood, “Lava” pits three teams against each other as they compete in extreme versions of the classic game.

The series sees contestants climb, vault and hang onto whatever they can grasp such as bedroom furniture, museum relics and traffic obstacles, all with the intention of not touching the floor because it’s lava – or in this case, warm pool water colored orange for dramatic effect.

Athleticism is recommended in this wacky rendition as teams will maneuver and navigate their way through the life-sized course utilizing their upper-body strength, agility, route-coordination and timing.

'Floor Is Lava' sees players maneuver and navigate their way through the life-sized course utilizing their upper-body strength, agility, route-coordination and timing. (Netflix)

Players will have much to their disposal as anything they can get their hands on is fair game. Additionally, for every player who manages to make it to the other side, a point is awarded to that team and the rules are simple; the squad with the most points at the end of their run wins $10,000.

In the event of a tie, the cash is given to the team with the fastest time.

With “Floor Is Lava,” Netflix is tripling down on their push to dominate the reality television space.

Since the coronavirus pandemic all but shuttered the world and limited productions, the once small-time market player has enjoyed success with their reality series “Love Is Blind,” “Dating Around,” “Selling Sunset” and their wildly popular and viral docuseries “Tiger King,” to name a few.