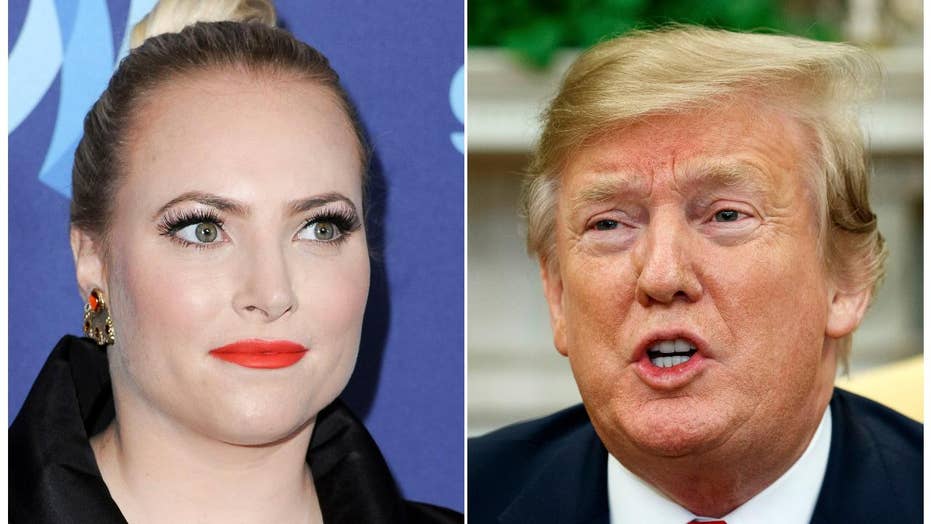 Meghan McCain isn’t a big fan of President Trump, but she said she’s “grateful” he’s the commander in chief because it helps her on “The View.”

McCain said in Ramin Setoodeh’s book, “Ladies who Punch: The Explosive Inside Story of ‘The View,’” that Trump makes her “job a little easier” on the ABC show, People magazine reported.

“If Trump wasn’t president, I don’t think I would be successful here,” McCain said about working on “The View.” “For that reason, I guess I’m grateful that Trump is president. It’s just made my job a little easier because I know why it happened.”

MEGHAN MCCAIN LASHES OUT AT JOY BEHAR ON 'THE VIEW': 'PART OF YOUR JOB IS TO LISTEN TO ME'

McCain joined “The View” in October 2017 as the panel’s conservative commentator and quickly became an outspoken critic of Trump, who has continued to criticize her father, Arizona Sen. John McCain, following his death last August.

Meghan McCain launched into a rant about Trump last month, saying it was “extremely emotional and exhausting” to come on the show and constantly talk about the president’s attacks on her father.

“[Trump] spends his weekend obsessing over great men because he knows it, I know it, and all of you know it, he will never be a great man,” McCain said on the show. “My father was his [Trump’s] kryptonite in life and he was kryptonite in death. On a personal level, all of us have love and families and when my father was alive until adulthood we would spend our time fishing, cooking, really celebrating life and I think it’s because he almost died.”

“And I just thought ‘your life is spent on weekends not with your family, not with your friends but obsessing.’ Obsessing over great men you could never live up to. That tells you everything you need to know about his pathetic life,” she added.

The 34-year-old host said in the book that although Trump does help her on “The View,” the president isn’t the reason why the show has strong ratings.

“That I don’t concede to. Everyone is like, ‘Oh, you’re popular because Trump.’ I think everyone is more interested in politics,” McCain said, per People magazine. “Young women are different now than when I was younger. Everyone is involved, civically engaged, and informed. I think that’s also why the show is doing so well.”

McCain said she is the “first real Republican” the show has hired and believes she’s “more of a Republican” than Elisabeth Hasselbeck, who was fired from “The View” in 2013. McCain said earlier this year that she sees herself as a "conservative first and foremost before being a Republican."

“I hope it’s in my obituary that I was the first Republican since Elisabeth Hasselbeck to survive more than one season on The View,” McCain said in Setoodeh's book released last week. “It’s one of my proudest moments.”

McCain frequently clashes with co-host Joy Behar, often getting into heated exchanges when the show is airing. The ABC talk show staple has also recently been plagued with bad publicity over its behind-the-scenes drama.