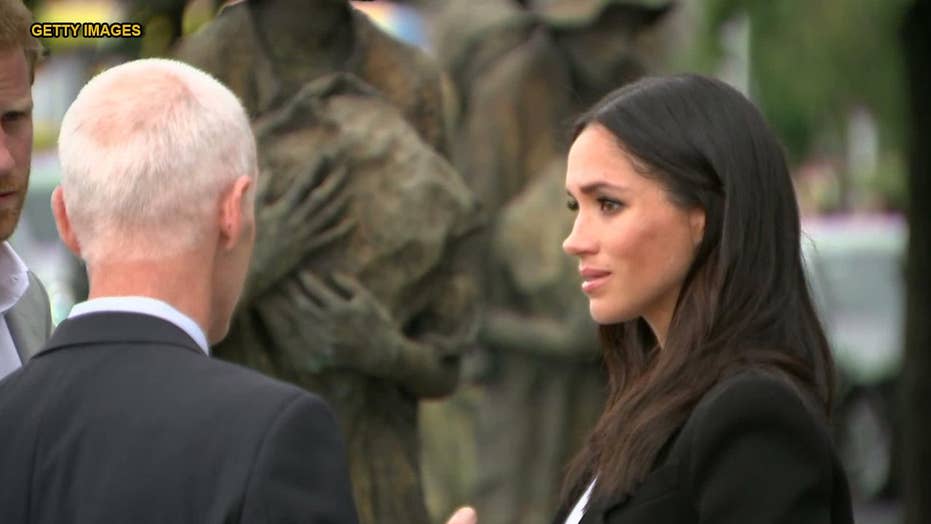 The Duchess of Sussex has shocked the British public, according to the biographer, who have "balked" at her spending.

Meghan Markle is getting heat from a royal expert who believes the Duchess of Sussex is messing with tradition.

Following reports that the 37-year-old apparently altered the engagement ring given to her by Britain’s Prince Harry less than two years ago, Majesty Magazine editor-in-chief Ingrid Seward said she “found it odd” that such a change would be made.

Seward has been covering the royal family since the ’80s and has written over 20 books on the subject.

Meghan Markle's ring on her engagement day (left) and during Trooping the Colour (right). Reuters/Getty

“I find it a bit odd Meghan would want to alter a ring that her husband had especially designed for her,” Seward told Fabulous Digital on Tuesday. “A royal engagement ring is a piece of history not a bit of jewelry to be updated when it looks old fashioned.”

According to the outlet, eagle-eyed fans first noticed the ring underwent a makeover when the new mother attended Trooping the Colour alongside her husband, 34. The original ring had a thick gold band with three diamonds — two of which belonged to Harry’s mother, the late Princess Diana of Wales. The seemingly newer version has a thinner, “diamond-studded micro-pave gold band.”

The outlet also shared it’s not been confirmed why or when the ring changed. However, Markle was first spotted without it toward the end of her pregnancy.

Prince Harry, Duke of Sussex and Meghan, Duchess of Sussex ride by carriage down the Mall during Trooping The Colour, the Queen's annual birthday parade, on June 08, 2019 in London, England. (Photo by Samir Hussein/Samir Hussein/WireImage)

During their official engagement interview, Harry revealed he designed the ring himself.

“The ring is obviously yellow gold because that’s her favorite and the main stone itself I sourced from Botswana and the little diamonds either side are from my mother’s jewelry collection, to make sure she’s with us on this crazy journey together,” Harry said at the time.

Buckingham Palace did not immediately respond to Fabulous Digital’s request for comment.

Back in February of this year, Markle raised eyebrows when she was spotted in New York City for her lavish baby shower. A the time, Vanity Fair reported the festivities were organized by Serena Williams, who booked out the penthouse suite of the Upper East Side hotel The Mark.

The tennis pro reportedly covered the cost of the $75,000-a-night room bill. And while Markle was flown out to the U.S. on a private jet, which is estimated to have cost over $100,000, Vanity Fair noted that the plane belongs to one of her close friends in Toronto, who covered the cost as a present for the then-expecting royal.

At the time, Seward told Fox News that the one downside to the baby shower was how high profiled it was. She said Markle could have benefitted from a more top-secret affair to avoid ruthless paparazzi and backlash from the press.

“Baby showers are now regular events here in the UK as they are in the U.S.,” explained Seward. “Not everyone has them but almost. Certainly, the Duchess of Cambridge had one, but it was very private, and we had no idea who attended. I am pretty sure [Princess] Diana didn’t have one, as they were not so fashionable then, but I think Fergie did and the Countess of Wessex. They are, of course, an American invention, which has crept over here in the last 20-30 years. They are not considered in any way vulgar for members of the royal family to enjoy, just a nice way for friends to be able to say congratulations.

Britain's Prince Harry and Meghan, Duchess of Sussex, during a photocall with their newborn son, in St George's Hall at Windsor Castle, Windsor, south England, on May 8, 2019. (Dominic Lipinski/Pool via AP)

“It is a little unfortunate it was so high profile and she was seen flying in and out on a private jet. But it would have been privately funded and nothing to do with the British taxpayer, so I see no reason for her not to have fun and enjoy it all, which she obviously did.”

Markle and Harry welcomed their son in May.