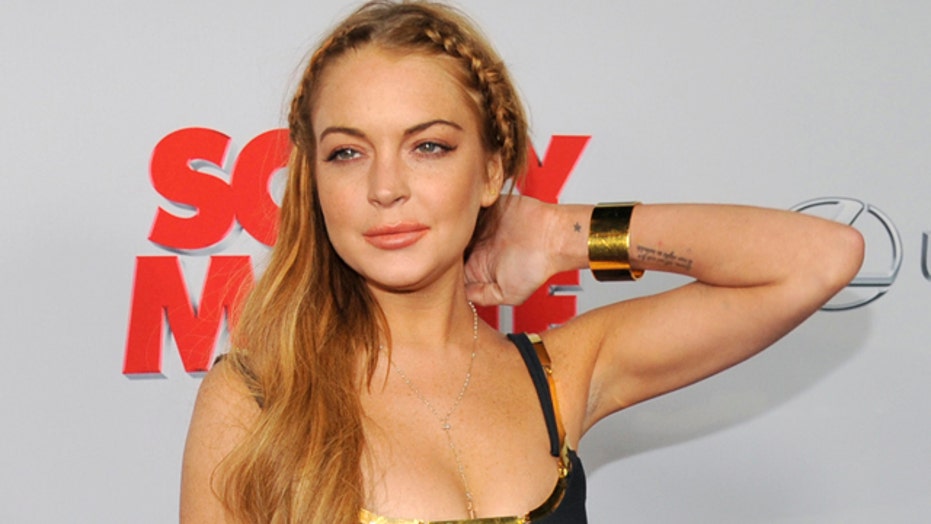 Lindsay Lohan shows up late to her own premiere

Lindsay Lohan showed up late for the Hollywood premiere of "Scary Movie 5."

The 26-year-old actress got a kiss from co-star Charlie Sheen in front of photographers, then told reporters on the arrivals line: "I'm taking care of myself."

After striking a plea deal in her most recent court case, the troubled actress is set to report to three months of locked rehab next month. She arrived about 20 minutes after the scheduled start of Thursday night's premiere screening.

Lohan appeared to blame her tardiness on a dress mix-up and smiled when fans chanted her name.

"Are they chanting? That's crazy. That's insane. It's like Brazil again. But yeah, my dress was left in New York. But it's fine."

She appears in one brief segment in the film playing herself alongside Sheen, but promoted it this week in an interview with "Late Show" host David Letterman, who pressed her about rehab.

"I have no hard feelings. His job is to crack jokes. So it's fine," Lohan said of the veteran talk-show host. "I think he's an amazing man and I respect him."

"He's a really nice person. I think that having my family's support — you know, my siblings and my sister, and stuff like that, my mom — I think that means the most, that the people that I care about in my life care about me," she said.

Sheen said he was happy to help the former child star.

"I do it because it's the right thing to do at the time, in the moment. She needed some help and I helped her. The biggest deal out of it was made through the media, you know," he said.