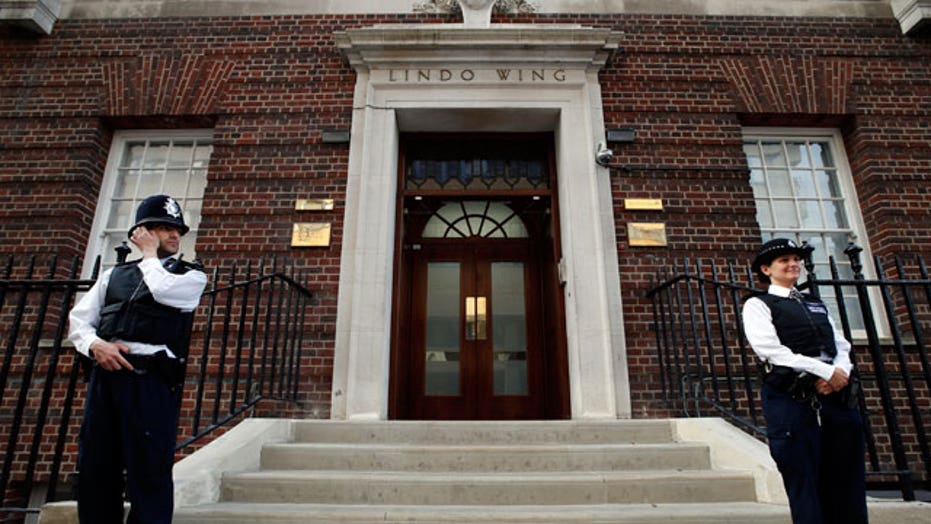 Kate Middleton goes into labor as the world watches and waits

The royal baby is almost here.

Britain and the world eagerly awaited word Monday of Prince William and wife Kate Middleton's first child and heir to the throne after the Duchess of Cambridge went into labor earlier in the day.

She was admitted to St. Mary’s Hospital early Monday morning after arriving in a private car with her husband. She is expected to give birth in the private Lindo Wing of the hospital, where Princess Diana gave birth to William and to his younger brother, Harry.

As crowds gathered outside, and at Buckingham Palace, awaiting the infant who will be third in line to the throne after Prince Charles and William, palace officials instituted a virtual news blackout.

The couple’s spokesman said only “things are progressing as normal,” and Sky News royal correspondent Paul Harrison said Kate’s condition had been described as “very well.”

But little is known about how the birth will proceed – if it will be a natural birth or caesarian or whether William will be at his wife’s side.

Queen Elizabeth II, about to become a great-grandmother, will be the first notified. She drew cheers from the crowds outside when she returned to Buckingham Palace Monday afternoon.

Representatives of the world's press had been gathered for days outside of St. Mary's Hospital. The Duchess' exact due date had been a closely guarded secret, but the general sense was that the royal baby's arrival was overdue by at least one or two days.

Protocol requires that the queen be informed about the birth before the general public is told.

Palace officials have said that the first hint will come when a royal aide emerges from the hospital with a signed bulletin carrying the Buckingham Palace letterhead. The bulletin will be given to an official who will be driven to Buckingham Palace, where it will be posted on an easel in public view in front of the building.

It was the exact way officials announced the birth of Prince Charles in 1948 and Prince William in 1982, though this time around the monarchy has moved with the times and added social media as an easier way to reach more people.

At the same time the bulletin is posted, there will be an official announcement on Twitter and the media will be formally notified. The document will give the baby's gender, weight and time of birth.It could be some time before the baby's name is made public. When William was born, a week passed before his name was announced. Charles's name remained a mystery for an entire month.

But it is the baby's gender that is of particular interest because the prospect of Kate's pregnancy prompted a change to laws of succession to ensure a daughter would not be passed over for the crown by a younger brother. Boy or girl, the child will be the prospective future monarch.

The birth of a new heir to the throne has been breathlessly anticipated by many Britons since William and Kate wed on April 29, 2011.

Despite a rough start to the pregnancy, when she was hospitalized for acute morning sickness, the 31-year-old Kate made a number of public appearances that were halted only near the end of her term.

Since the duchess has cut back on her royal duties, media outlets have been clamoring for position outside of the hospital in anticipation of the birth, jockeying to secure the best vantage point for filming William and Kate emerging, babe in arms.