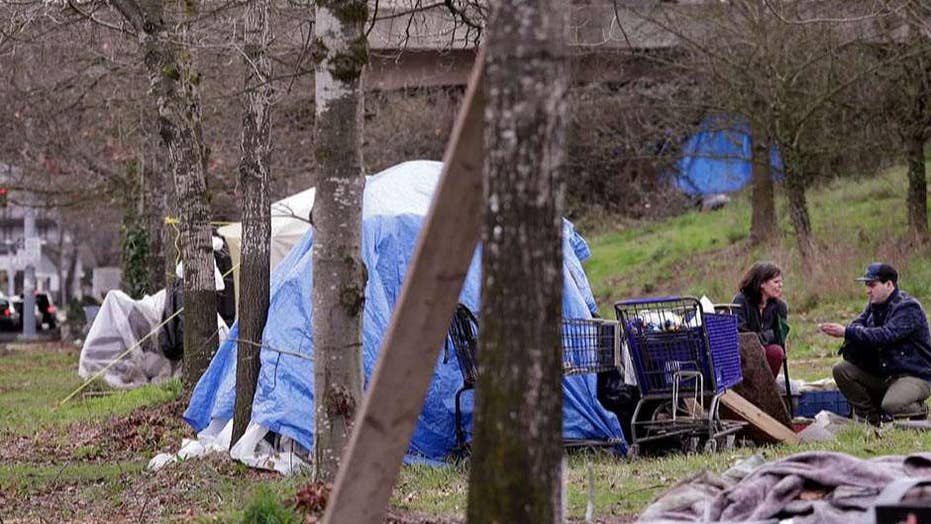 Homeless crisis spiraling out of control in West Coast cities

Kanye West’s stab at easing California’s homeless and housing crises has hit a regulatory snag, and the countdown clock is ticking.

The eccentric hip-hop star has constructed three domed structures on his 300-acre Calabasas estate. Built by the Rennaissance rapper's architectural arm called Yeezy Home, the structures have been described as a housing experiment aimed primarily at low-income and homeless people that hopes to put them on an even playing field with the wealthy.

But according to multiple reports, noise complaints from neighbors triggered inspections that deemed West's structures permanent due to their concrete platforms.

Yeezy Home now has until September 15 to secure the proper building permits, or the 50-foot-high huts must be torn down.

West now has until September 15 to secure the proper building permits, or the 50-foot-high huts must be torn down. (Backgrid)

The otherworldly structures, which resemble the homes on Tattooine in the “Star Wars” saga, were built on land purchased by West and wife Kim Kardashian in 2014. The huts are ambitiously designed (this is Kanye West we are talking about) to both blur the lines between upper, middle and lower classes, while providing spaces for every life stage, according to TMZ.

In June, the designer Jalil Peraza, who worked with West in the past, posted now-removed images on Instagram depicting a “low-income housing scheme, made of prefabricated concrete in collaboration with Petra Kustrin, Jalil Peraza, Kanye West, Nejc Skufca,” Curbed LA reported.

West introduced his “architecture arm” in May 2018, in part to address the worsening housing situation, chronicled by Fox News in the summer of 2019 in a special series on the homeless crisis across several cities.

Some fear the City of Angels is at the point of no return when it comes to its homeless problem, and are angry at elected officials who talk a big game but rarely deliver. "I don't want to see them on camera anymore," Marquesha Babers, who lived on Skid Row as a teenager, told Fox News. "I don't want them to write any more articles about how much they care or how much they're trying to change things. I want to see them do it."

"The best we get out of those elected to deal with problems are soundbites," said Pete White, the founder of the Los Angeles Community Action Network. "Soundbites that say 'it's a humanitarian crisis' and that 'we have to do something' only to see that something be either nothing or pathways to criminalization."

The otherworldly structures were built on land purchased by West and wife Kim Kardashian in 2014. (Getty)

California accounts for most of the country's homeless population. Despite throwing hundreds of millions of dollars at the problem, the number of homeless in Los Angeles County has risen for the third time in four years. The most recent count released in June by the Los Angeles County Homeless Services Authority shows that there are nearly 60,000 homeless people living without permanent shelter on any given night.

In the city of Los Angeles, the number of homeless in 2019 jumped 16 percent, to 36,000, while the number of chronically homeless -- those who have been living on the streets for more than a year -- rose by 17 percent. A staggering three-quarters of the city's homeless population is unsheltered.