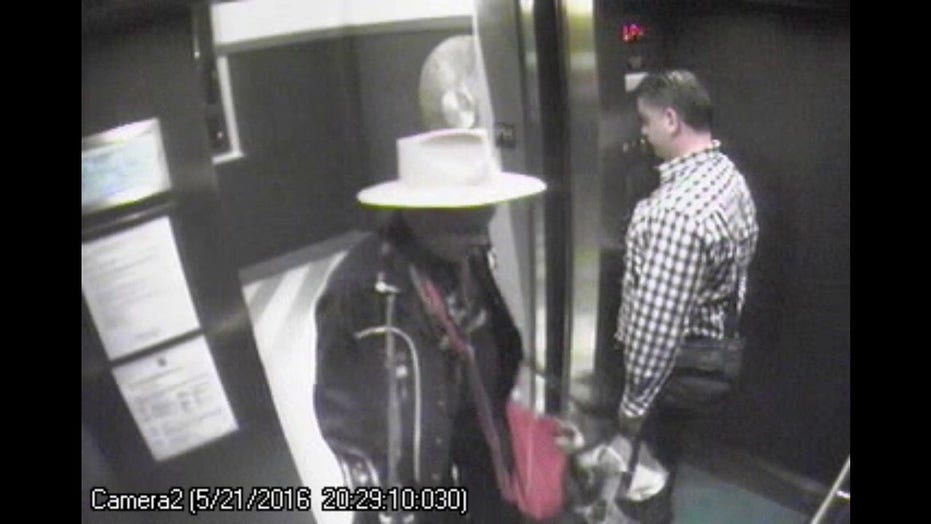 In a video shown in court, Johnny Depp is seen pacing in an elevator after a fight with Amber Heard on May 21, 2016.

Behavioral analyst Susan Constantine, who specializes in reading body language and detecting deception, says she does "not believe" Johnny Depp "was abusive with" his ex-wife, Amber Heard, based on both of their testimonies during Depp's defamation trial against Heard.

The "Aquaman" actress, 36, took the witness stand in a Fairfax, Virginia, courtroom for the first time Wednesday after the "Pirates of the Caribbean" actor, 58, completed his testimony on Tuesday. They have both accused each other of physical and emotional abuse.

Amber Heard enters the courtroom at the Fairfax County Circuit Court in Fairfax, Virginia, on May 3, 2022. (Jim Watson/Pool/AFP)

Constantine added that she thinks Heard either has "borderline personality disorder" (BPD) or "some emotional insecurity issues."

In fact, forensic and clinical psychologist Dr. Shannon Curry testified Tuesday on behalf of Depp's legal team that Heard has BPD and histrionic personality disorder (HPD). Curry said she met with Heard, 36, for 12 hours as well as reviewed her medical, legal and psychiatric records to reach her diagnosis. She described the disorders as "two sides of the same coin" that feature "dramatic, erratic and emotional" behavior.

"[W]e do talk about her dress code. You know, she's parodying what Johnny is wearing. Wear the Gucci tie and the Gucci pin. … When you look at this parroting of how they're dressed alike, this definitely is a power-play between the two of them. Who's the one that's wearing the pants in the family?" the behavioral analyst said.

She added that attorneys often advise women not to wear "black in the courtroom."

"A woman never wears black in the courtroom. Ever, ever, ever. So what's this all about? Domestic violence, power, control and dominance. What does she wear? A color of control, power and dominance. So, really, a bad move on Amber Heard's legal team," Constantine said, adding that Heard's pantsuit mimics her ex-husband.

On the stand Wednesday, Heard detailed multiple physical abuse allegations and blamed his behavior on substance abuse and addiction.

By 2012, she was "walking on eggshells" but didn't know what she'd done wrong. Depp would grab her by the hair, backhand her and slap her in cycles of abuse. There were constant accusations of infidelity, then "explosions." Heard said she confided in her therapist and her mother, who has since passed away. Depp and Heard were married between 2015 and 2017.

Amber Heard testifies that Johnny Depp hit her on May 4, 2022. (Elizabeth Frantz/Pool/AFP)

The actress also described incidents in which Depp slapped her multiple times, pinned her against a wall and choked her, and did a "cavity search" on her while looking for his cocaine.

"He ripped my dress," she recalled, fighting back tears. "He rips my underwear off and then he proceeds to do a cavity search. He said he was looking for his drugs, his cocaine, his coke."

Depp didn't appear to look at Heard a single time during her afternoon on the witness stand. But he did occasionally smirk in response to her testimony or lean over to his lawyer, Ben Chew, to whisper in his ear.

Johnny Depp looks on in the courtroom at the Fairfax County Circuit Court in Fairfax, Virginia, on May 3, 2022. (Jim Watson/Pool/AFP)

In one 2016 recording taken after Head accused Depp of domestic abuse and obtained a restraining order, Heard says to Depp, "You can say it was a fair fight. Tell the world, Johnny, tell them, 'Johnny Depp, I, Johnny Depp, a man, I’m a victim, too, of domestic violence.'…and see how many people believe or side with you."

Constantine said that while she kept in mind that Depp is an actor while analyzing his courtroom behavior, she found his testimony to be authentic.

"This is not one of these … Johnny Depp performances. This is the real deal. This truly happened. This did happen. And he happens to be a victim of domestic violence," the behavior analyst said, calling Depp an "internal processor" based on the movement of his eyes and other body language while he is recounting past events on the witness stand.

She aslo claimed that Depp's apparent vulnerability and embarrassment while speaking about his struggle with substance abuse is indicative of "someone that was a survivor."

Depp, 58, is suing her over a 2018 op-ed she wrote alleging she was a victim of domestic violence, claiming the abuse allegations were an elaborate "hoax" to promote her film "Aquaman" and punish him for leaving her.

She countersued the "Pirates of the Caribbean" star for $100 million, accusing him and his former lawyer of conspiring to destroy her reputation in a series of smear campaigns.

Heard is expected back on the stand at 10 a.m.