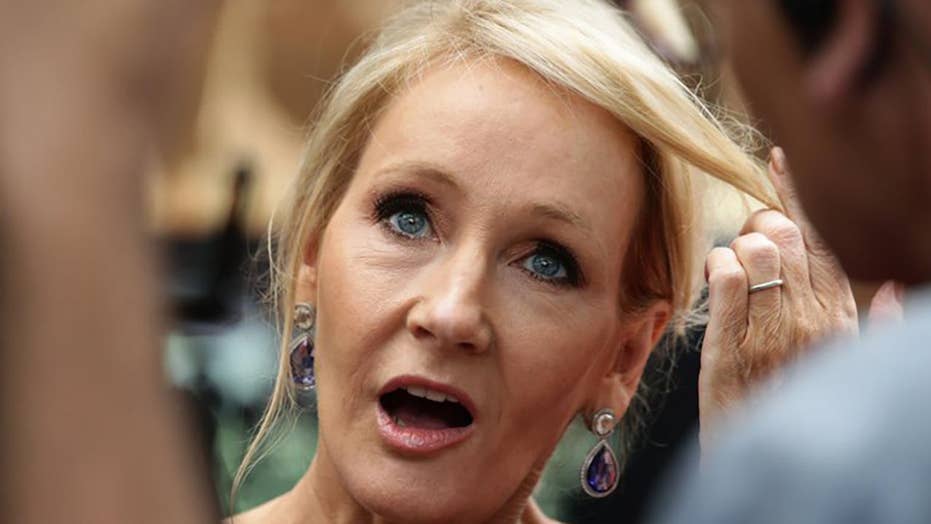 "Harry Potter" author J.K. Rowling faced another backlash Saturday after issuing a cheeky tweet on sex and gender that opened up a new chapter in her ongoing feud with LGBT advocates.

"If sex isn’t real, there’s no same-sex attraction," Rowling tweeted to her 14.5 million followers. "If sex isn’t real, the lived reality of women globally is erased. I know and love trans people, but erasing the concept of sex removes the ability of many to meaningfully discuss their lives. It isn’t hate to speak the truth."

Rowling tweeted those comments around 6 p.m. ET. Within an hour, she was trending on Twitter and received thousands of responses.

In another tweet, the U.K.-based author criticized a prominent idea among the left -- that people can menstruate if they're not women. "‘People who menstruate,’" she tweeted, linking to an op-ed with that phrasing. "I’m sure there used to be a word for those people. Someone help me out. Wumben? Wimpund? Woomud?" she asked sarcastically.

GLAAD also accused Rowling of "align[ing] herself with an ideology which willfully distorts facts about gender identity and people who are trans."

Others suggested Rowling was ignorant in promoting a binary view of sex and gender.

"You’re a smart person. How do you not yet understand the difference between sex and gender?" musician Brad Walsh tweeted. "The only way I can possibly explain your ignorance at this point is willfulness. It’s incredibly disappointing."

Rowling later tweeted that it was ridiculous for people to accuse her of "hate."

"The idea that women like me, who’ve been empathetic to trans people for decades, feeling kinship because they’re vulnerable in the same way as women - ie, to male violence - ‘hate’ trans people because they think sex is real and has lived consequences - is a nonsense," she said.

This wasn't the first time Rowling caught flak for comments surrounding gender. Rowling spoke out in defense of Maya Forstater, who was fired from her job at a think tank after tweeting that she was surprised to see "smart people" she knew tying themselves in knots to avoid saying the truth that men cannot change into women."

“Dress however you please," Rowling said. "Call yourself whatever you like. Sleep with any consenting adult who’ll have you. Live your best life in peace and security. But force women out of their jobs for stating that sex is real?  #IStandWithMaya #ThisIsNotADrill.”

Liberal groups like HRC, as well as medical associations, assert that gender is more complicated than Rowling suggested. “Gender identity and assigned sex at birth can be different one from the other, and that difference needs to be recognized in order to effectively guarantee access to care for transgender people,” read a 2018 letter from dozens of health groups, including the American Psychiatric Association, American Academy of Pediatrics, and Endocrine Society.

However, some like Dr. Paul McHugh disagree. "Transgendered men do not become women, nor do transgendered women become men," McHugh reportedly said. "All (including Bruce Jenner) become feminized men or masculinized women, counterfeits or impersonators of the sex with which they ‘identify.’ In that lies their problematic future."

The American College of Pediatricians has similarly condemned treatments like puberty blockers for children. Last summer, the group called on the surgeon general to investigate those types of treatments.