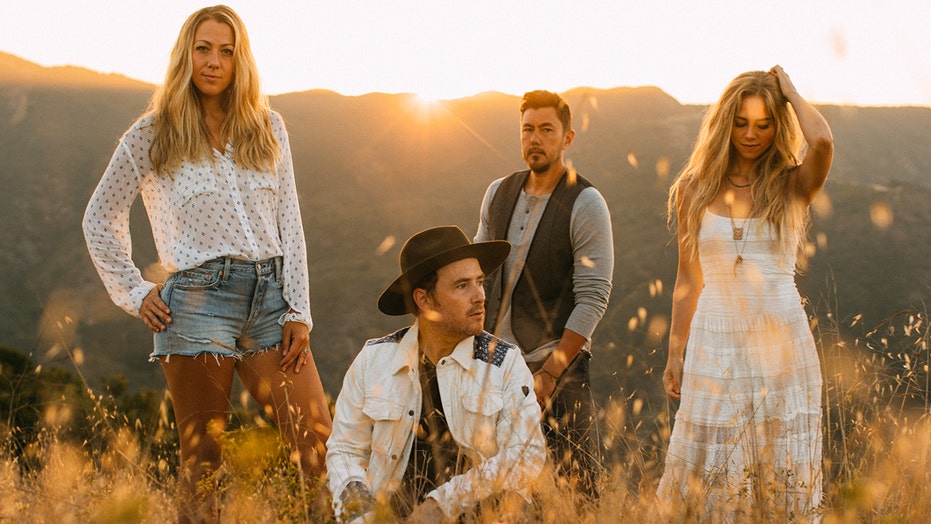 What once began as four solo acts have blossomed into one of country-rock’s brightest bands in existence today.

Infusing the breadth of musical styles each of them embodies, Gone West aims to present the world with a sound it has never heard before and brings Young’s native Hawaiian origins to country music.

LEVI HUMMON: 5 THINGS TO KNOW ABOUT THE COUNTRY MUSIC CROONER AND SONGWRITER

“They are both a humble, grassroots music of the people," Young told Fox News of the similarities between the two genres. "Many of the songs tell stories that are influenced by the physical environment of oceans, mountains and flowers.

"The music in both cases has been infused with instruments brought over from other countries – the ‘ukulele, from Portugal, is what the banjo from Africa is to country music," he added. "Also, the steel guitar originated in Hawai’i, which we have loved incorporating in our music."

Gone West released their latest single "What Could've Been" in September and are set to join Kenney Chesney on tour next summer.

CODY WEBB: 5 THINGS TO KNOW ABOUT THE COUNTRY MUSIC SINGER-SONGWRITER

Here are 5 things to know about the country-rock band:

Colbie: “We started Gone West 2 years ago, but our story goes back 14 years. Jason and I met in 2005 and we wrote my first album ‘Coco’ together. We’ve continued writing together all these years. We both met Justin in 2006 and were fans of his Hawaiian music. I asked Justin to join my band in 2007, we got to tour the world together for a few years and then fell in love and we just celebrated our 10-year anniversary.

CANAAN SMITH: 5 THINGS TO KNOW ABOUT THE COUNTRY MUSIC SINGER-SONGWRITER

“Nelly and Jason met in 2009 in a writing session in Nashville while she was in her country band The JaneDear Girls. They were friends for a couple of years and then fell in love and have been married for 8 years now.”

2. They debuted as a band on one of the most iconic country music stages in the world.

Gone West: “Playing the Grand Ole Opry was our first-ever live performance as Gone West, and to get to be on that beautiful stage, with the best sound, and an audience that is there to listen, it was surreal. They were some of the first people to believe in us. Plus, the entire Opry team were the nicest and most professional people we’ve had the privilege of working with.

“The great thing is we all started out working together first, so that’s really all we know and we’re used to it. We love that we get to be on the road with our friends and getting to travel the world with our spouses. There have been hard moments for all of us that we’ve had to navigate, in any case when people spend so much time together. But we’re all willing to put in the effort. And it’s important to put work aside and just go do something fun together when we can.”

3. They relish in having creative differences.

Gone West: “We all respect each other’s opinions and creative ideas and we’ve found that allowing each person to experiment and try an idea is always helpful. Trial and error, compromise and majority vote work for us too. These songs wouldn’t sound the way they do if one of us wasn’t in the room, or if we all weren’t willing to be vulnerable and give our honest opinion of a song, musical idea or lyric.

“We all really wanted to be in a band and especially one with our friends and significant others. It was a natural progression just from us having worked together for years, plus touring together, so we figured why not try it! It’s nice to have people to go through the highs and lows with, and those highs and lows are what we wrote all our songs about together and why we named our EP 'Tides.'”

Colbie: For me, I think the opportunity to write and release a duet with Jason Mraz really propelled things. That was the first big thing that happened after my career started from Myspace with my song “Bubbly.”  Mraz introducing me to his fan base, giving me more credibility with our collaboration, playing shows with him around the world and singing our song “Lucky” on TV a bunch. I couldn’t believe it was real ‘cause I was such a huge fan of his.

Justin: There was a show in Hawai’i early on in my career when I had my first radio hit there. I was a special guest as a new artist. I just remember the entire crowd singing along to every word of my song with me. I was shocked and amazed and never forgot that moment.

Nelly: I remember how much it meant to Susie [Brown] and I, the JaneDear Girls – when we got nominated for 2 ACM’s in 2011. It truly was a shocking surprise and an incredible honor for 2 new women to be nominated and recognized in country music in a time where there weren’t very many females breaking through.

Jason: For me, as a songwriter specifically, when Colbie's first album ‘Coco’ came out, everything changed. Those were the first songs I had ever co-written with anyone and I didn't even know that could be a career. Because of that album, I got my first publishing deal and have been writing with and for artists since then.

5. Fans will be amazed to learn these interesting facts about the talented artists.

Colbie: I started homeschooling halfway through high school. I have 3 tattoos. I’m an introvert. Been vegetarian for 9 years.

Justin: I’m a HUGE Chicago Bears fan, which surprises people, being from Hawai’i. I even have a Bears tattoo.

Nelly: I was a sports girl/tomboy growing up. I trained competitively as a child in gymnastics and even got to travel to Germany to train. In high school, I took up pole-vaulting! I didn’t start writing/performing music until I broke my wrist in a pole vaulting accident and needed to take time off.

Jason: Growing up, I played almost all of the sports including soccer, baseball, basketball, football, tennis and hockey – but I quit them all my junior year of high school to concentrate on making music and being in all of the different choirs at school.

Gone West's new single "What Could've Been" is out now.