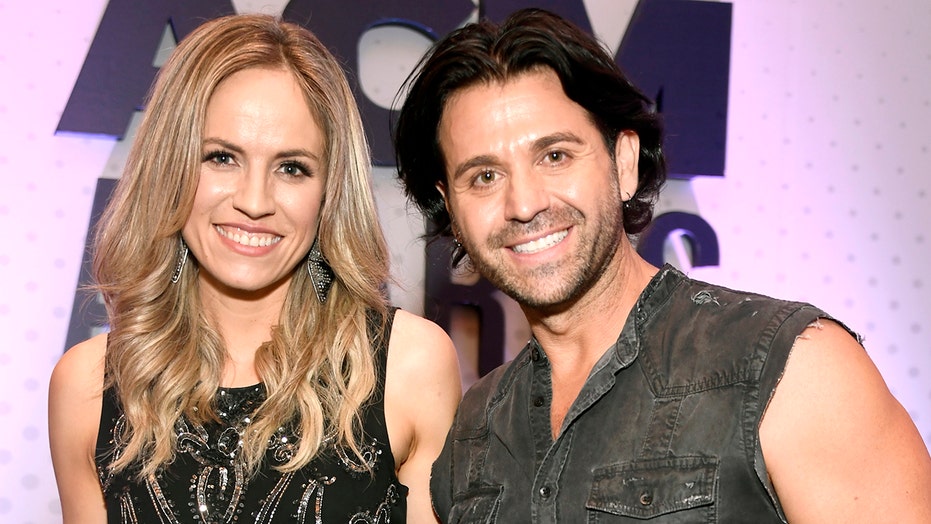 Before country music duo Haley & Michaels was gracing the stage of “Monday Night Football” in front of 60,000 screaming fans and even more tuning in at home, they went by the more conventional names Shannon Haley and Ryan Michaels – two musicians who had grown up just three miles apart in Northern California but had never met until crossing paths living in Nashville.

“We started writing and singing together right away, and within a year we were officially 'Haley & Michaels.' We’ve been together as a duo for over six years,” the husband-wife duo told Fox News.

Haley & Michaels spoke to us about their budding careers, and how the twosome found out their hit single “Hail Mary” -- from the Netflix original film “Walk. Ride. Rodeo.”-- would be the official song of the “San Francisco 49ers.

Here are five things to know about country music’s next big thing:

1. They were at the airport when their career got a major boost on national TV.

“We were boarding an airplane in the Nashville airport, leaving town for a show, and our phones started blowing up with messages from friends, family and people we hadn’t heard from in a long time. Apparently, Hoda Kotb put our wedding song, 'Giving It All (To You)' in her iHoda playlist and was singing along to it. We had written the song as our wedding vows and never expected something like this to happen.”

“Shortly after, we were invited to perform it live on the 'Today' show. It was so surreal singing our wedding vows on national TV and watching Hoda sing along to the words! Getting that type of exposure for that song gave it a life and it has since become many other couples’ wedding song as well. It is the most moving thing for us when people stop us and share their stories about getting married, engaged, walking down the aisle or dancing to our song. It has given us an added layer of depth to our passion and drive to do what we do as a married couple and as a duo and that has changed our lives and career for the better.”

2. They were personally asked by San Francisco 49ers President Al Guido if their song “Hail Mary” could be featured for the franchise.

“We were on a flight heading to the West Coast as part of our radio tour and we got an email from the president of the San Francisco 49ers. We were using the airplane Wi-Fi so it was extremely slow and kept disconnecting, which added to our overall disbelief. When we finally were able to get the email fully loaded, we read it over and over and finally looked at each other and just couldn’t stop smiling and we spent the rest of the flight basically jumping up and down in our seats. We’re pretty sure everyone on the plane thought we were very strange because we were not at all calm.”

The pair continued: “It’s beyond a dream come true for us. ‘Hail Mary’ was written about some of the adversities we have overcome in our life and music career. It was also inspired by our love of football and especially the 49ers! Every sports fan knows that feeling when their team is at the end of the game with only seconds left, and the only option remaining is to throw a ‘Hail Mary.’ That’s where we were at in our lives when we wrote this. So to have this song be connected with the team is so rewarding and overwhelming for us! It’s one of those highlights in life where you just feel like it can’t possibly get better than this. It still feels so surreal and we are truly honored and humbled.”

3. Ryan’s biggest personal achievement came at the NFL draft when he split the uprights while holding a beer.

“Kicking a 40-yard field goal at the NFL draft with a beer in my hand is the highlight of both of our lives. The fact that it would have been good from 50 is neither here nor there.”

Added the 49ers fanatics: “When we got that call from the 49ers confirming that we would be playing their Monday Night Game we were over the top excited and again so honored because we are a new artist and to get this type of opportunity is so rare and special. We got to collaborate with the 49ers and they filmed a music video for 'Hail Mary' at Levi’s Stadium. We sang the song on a stage in that field while the stadium was empty. We kept thinking: 'Woah. This place is going to be full and we will be playing "Monday Night Football" and it’s gonna feel a lot different.' We’re going to go out there and do our thing and try to soak it all in and live it up. But not gonna lie, there are gonna be those pre-show jitters like never before!”

4. They both love kids and can’t wait to have their own roster of superstars.

“Yes, we absolutely want to have kids. It’s crazy how time flies so quickly! We’ve been married for over four years but sometimes it feels like one. Parenthood is definitely part of our plan and dream. We are just trying to figure out how we would balance that with our lifestyle and career. It’s been inspiring to see other country artists manage it all! In the meantime, we have two incredible cats who we are very proud of.”

5. They meditate together and play fantasy football to aid in their mental health.

“We are big believers that taking care of our minds is so important. We are big fans of Eckhart Tolle, Wayne Dyer and others and listen to a lot of podcasts and talks when we have time. We also meditate together and separately and sometimes use apps on our phones to do that. We do gratitudes every morning where we each go back and forth and name 7 things we are grateful for – it can be big things like our family’s health, a supporter of our career, or small things like the vanilla creamer available in the lobby of the Courtyard Marriott. And of course, drafting a fantasy football team or two is very good for our mental health.”