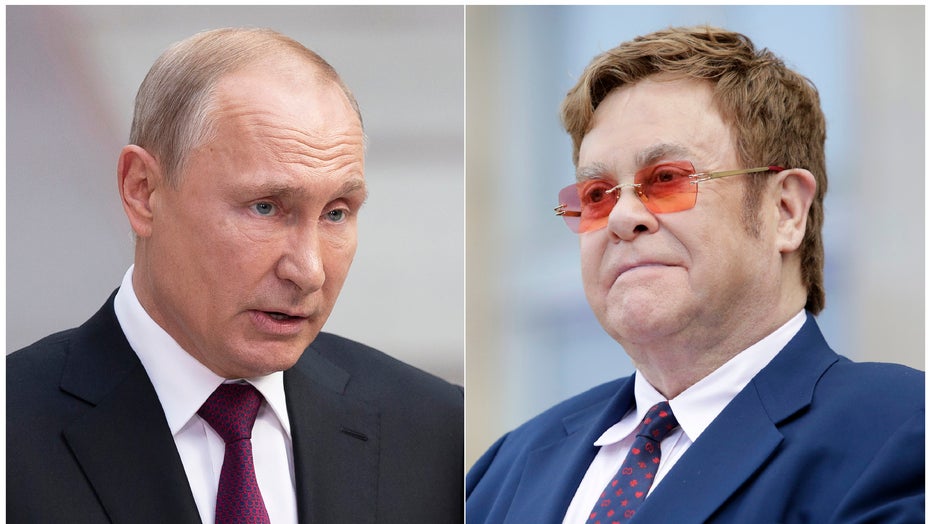 Elton John took to Twitter on Friday to respond to Russian President Vladimir Putin's recent interview with the Financial Times.

In the interview, published on Thursday, Putin said Russia has "no problem with LGBT persons. ... Let everyone be happy," but John, 72, called Putin's words hypocritical since a Russian distributor censored LGBTQ-related scenes from "Rocketman," a film based on John's life and career.

"Dear President Putin, I was deeply upset when I read your recent interview in The Financial Times," the "Tiny Dancer" singer wrote. "I strongly disagree with your view that pursuing policies that embrace multicultural and sexual diversity are obsolete in our societies."

He continued: "I find duplicity in your comment that you want LGBT people to 'be happy' and that 'we have no problem in that'. Yet Russian distributors chose to heavily censor my film 'Rocketman' by removing all references to my finding true happiness through my 25-year relationship with [husband] David [Furnish] and the raising of my two beautiful sons.

"This feels like hypocrisy to me," John added. "I am proud to live in a part of the world where our governments have evolved to recognise the universal human right to love whoever we want."

The star went on to say he is "truly grateful for the advancement in government policies that have allowed and legally supported" his marriage to Furnish, 56.

At the time, Russian news agencies reported that the distribution company said the scenes were cut to conform with Russian law, however, the Ministry of Culture said it was not involved in the decision. (In 2013, the country passed a law banning so-called propaganda supporting non-traditional sexuality from being made available to minors.)

ELTON JOHN BIOPIC 'ROCKETMAN' BANNED IN SAMOA DUE TO HOMOSEXUALITY

In response, John and the filmmakers released a joint statement that said: "The local distributor has edited out certain scenes, denying the audience the opportunity to see the film as it was intended, is a sad reflection of the divided world we still live in and how it can still be so cruelly unaccepting of the love between two people."