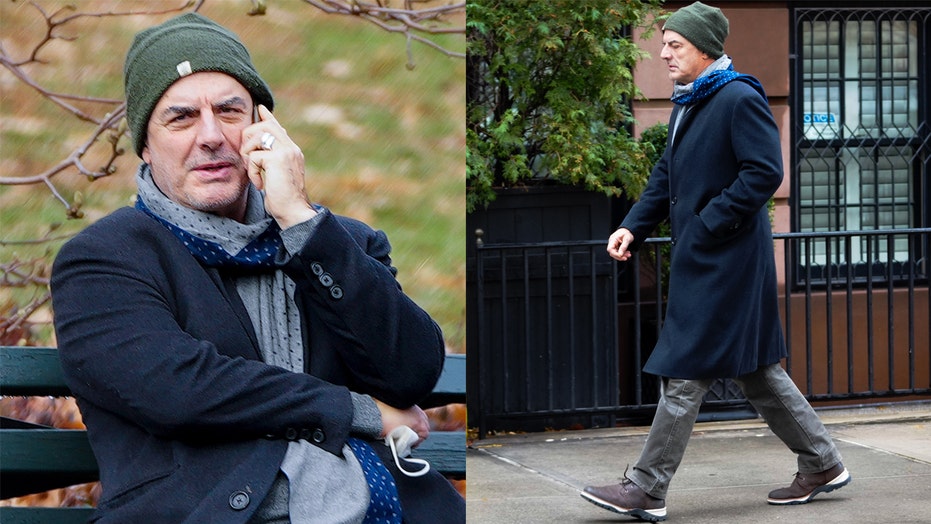 The "Sex and the City" alum was spotted out and about on solo walk on Dec. 25 as he continues to face allegations of sexual misconduct.

For his chilly New York stroll, the actor, 67, wore a long, dark blue coat over a gray shirt and dark gray pants. He also donned a green beanie cap, a multicolored scarf and brown shoes.

Though Noth was seen alone, he was also spotted chatting on the phone while relaxing on a park bench in Central Park.

CHRIS NOTH ALL SMILES IN MASSACHUSETTS AMID SEXUAL ASSAULT ALLEGATIONS

Most recently, a woman claimed in a press conference alongside high-power attorney Gloria Allred that Noth became aggressive with her during an encounter in New York in 2002.

Earlier this month, two other women accused Noth of sexually assaulting them. One woman alleged that she was assaulted by the star in California in 2004 when she was 22 and needed stitches after the ordeal.

The scandalous actor was seen out for a walk in Central Park, where he also had a conversation via phone. (The Image Direct)

A second woman claimed Noth assaulted her in New York in 2015 when she was 25.

The actor has seen swift backlash following the accusations. Notably, he was dropped from his series regular role on CBS's "The Equalizer" and he was also dropped by his talent agency amid the allegations, and Peloton pulled an ad featuring the star.

Chris Noth has been accused of sexual misconduct by multiple women. (Photo by Gotham/GC Images)

Noth has denied the allegations.

"The accusations against me made by individuals I met years, even decades, ago are categorically false," a statement from Noth previously provided to Fox News Digital by his reps read. "These stories could’ve been from 30 years ago or 30 days ago — no always means no — that is a line I did not cross. The encounters were consensual."

He added: "It’s difficult not to question the timing of these stories coming out. I don’t know for certain why they are surfacing now, but I do know this: I did not assault these women."