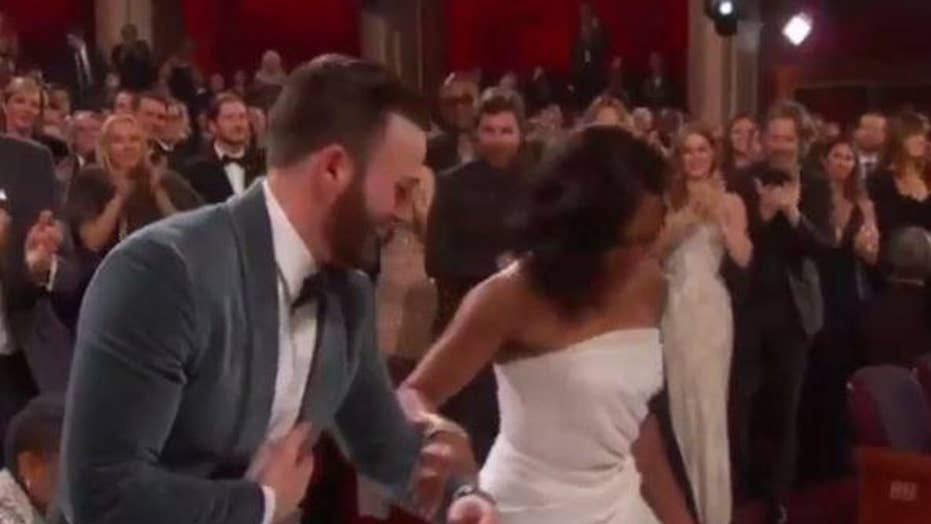 Oscars viewers are crushing on Chris Evans for being the "perfect gentleman" during the awards show Sunday night.

The "Captain America" actor quickly began trending online after he gave Best Supporting Actress winner Regina King ("If Beale Street Could Talk") an arm as she made her way to the stage to accept her very first Oscar.

As King's name was called, the actress attempted to fix her long, white dress and Evans jumped from his seat to help. He held out his arm for her to grab on and guided her carefully up the stairs — helping the actress avoid a Jennifer Lawrence-like trip.

"Thank you," King repeated as Evans accompanied to the steps.

It was a small gesture but kind enough that the Internet quickly began swooning over the Marvel superhero. He was mentioned in more than 75,000 tweets as of 10 p.m. ET Sunday.

"Chris Evans might actually be better than Captain America," another suggested.

"CHRIS EVANS HELPING REGINA KING UP IS THE BEST THING EVER, WHAT A GENTLEMAN #OSCARS," another user wrote in all caps, along with a video of the chivalrous act that has already garnered more than 300,000 views.

Fans couldn't help but notice the subtle fist pump Evans did when "Black Panther" made history when Hannah Beachler became the first African-American winner for the category.