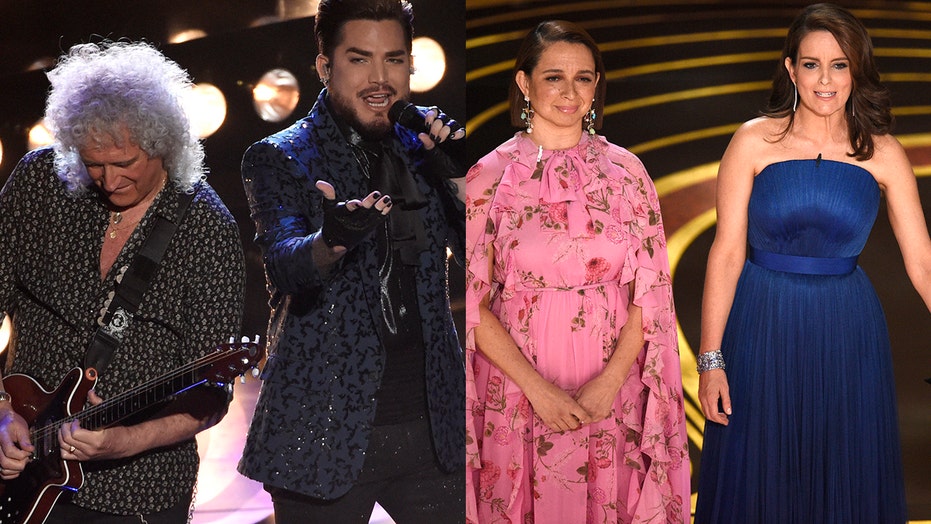 Despite having no host, the Oscars begins with a strong performance by Queen as well as a comedic monologue by Tina Fey, Amy Poehler, and Maya Rudolph.

Viewers who tuned into the 91st Academy Awards on Sunday night may have thought they were watching the Grammys as Hollywood's biggest night relied heavily on musical performances as opposed to witty dialogue after opting to forgo a host for only the second time in decades.

While "Green Book" won the top honor for best picture, it was Lady Gaga and Bradley Cooper's passionate performance of "Shallow" from "A Star Is Born" and Queen, with Adam Lambert singing in Freddie Mercury's place, that moved the audience.

The performances gave the show a distinctly Grammy-like flavor as Hollywood's prestigious ceremony sought to prove that it's still "champion of the world" after last year's record-low ratings.

An image of Freddie Mercury appears on screen as Brian May, left, and Adam Lambert of Queen perform at the Oscars on Sunday, Feb. 24, 2019, at the Dolby Theatre in Los Angeles. (Photo by Chris Pizzello/Invision/AP)

Following Queen's opening the show, the motion picture academy ran a montage of the year's movies before Tina Fey — alongside Amy Poehler and Maya Rudolph — welcomed the Dolby Theatre audience to "the one-millionth Academy Awards." The trio ran through the kind of jokes, they said, they would have said if they were, in fact, hosting.

They wasted no time poking fun at the series of missteps and backtracks by the Academy of Motion Picture Arts and Sciences which included a new best "popular film" category was in, and then it was out, Kevin Hart was host and then he wasn't and some categories were removed from the live broadcast, and then they were back.

"We are not your hosts," Fey pointed out before Rudolph jumped in and said, "So just a quick update in case you're confused. There is no host tonight, there will be no popular movie category and Mexico is not paying for the wall."

Maya Rudolph, from left, Tina Fey and Amy Poehler present the award for best performance by an actress in a supporting role at the Oscars on Sunday, Feb. 24, 2019, at the Dolby Theatre in Los Angeles. (Photo by Chris Pizzello/Invision/AP)

Rudolph's political jab got the audience cheering before Regina King tearfully accepted her award for her role in "If Beale Street Could Talk." The crowd gave King a standing ovation for her first Oscar.

"Mom, I love you so much," the actress told her mother who was sitting in the audience. "Thank you for teaching me that God...always has been leaning in my direction...God is good all the time."

Regina King accepts the award for best performance by an actress in a supporting role for "If Beale Street Could Talk" at the Oscars on Sunday, Feb. 24, 2019, at the Dolby Theatre in Los Angeles. (Photo by Chris Pizzello/Invision/AP)

Another politically charged moment came when Spike Lee when he won best adapted screenplay for "BlacKkKlansman."

Lee started out his acceptance speech with some profanity, telling producers not to start the clock on his speech. Winners have been allotted 90 seconds for their speech from the time their names are called.

Lee ready from a two-page letter that tied together history and the years 1619 and 2019, along with his own story.

He then urged people to "do the right thing" in the upcoming 2020 presidential election.

"The 2020 presidential election is around the corner," Lee said. "Let's all mobilize, let's all be on the right side of history. Make the moral choice between love vs hate. Let’s do the right thing. You know I had to get that in there."

Charlie Wachtel, left, and Spike Lee accept the award for best adapted screenplay for "BlacKkKlansman" at the Oscars on Sunday, Feb. 24, 2019, at the Dolby Theatre in Los Angeles. (Photo by Chris Pizzello/Invision/AP)

One of the night's top honors went to Rami Malek who won best actor for his portrayal of Queen frontman Freddie Mercury in "Bohemian Rhapsody."

"I may not have been the obvious choice but I guess it worked out," Malek joked after paying tribute to his later father, who he said didn't get to see him become a film star.

Lucy Boynton, left, kisses Rami Malek in the audience after he is announced winner of the award for best performance by an actor in a leading role for "Bohemian Rhapsody" at the Oscars on Sunday, Feb. 24, 2019, at the Dolby Theatre in Los Angeles. (Photo by Chris Pizzello/Invision/AP)

Best actress went to Olivia Colman for "The Favourite" and the British star had a hard time holding back her shock as Glenn Close was considered a shoo-in for the award.

Olivia Colman is congratulated in the audience as she is announced winner of the award for best performance by an actress in a leading role for "The Favourite" at the Oscars on Sunday, Feb. 24, 2019, at the Dolby Theatre in Los Angeles. (Photo by Chris Pizzello/Invision/AP)

While Gaga lost the best actress award to Colman, she took home best original song for "Shallow" from "A Star Is Born."

Gaga effusively thanked the academy and her co-winners, as well as her sister and Cooper.

Best director went to Afonso Cuaron for "Roma" which also won best foreign language film -- a first for Mexico. The writer-director dedicated his speech to domestic workers, noting that tens of millions of them work around the world with any rights.

But almost stealing Carter's spotlight was Melissa McCarthy who presented her with the award dressed in a seeming nod to "The Favourite" and its Queen Anne's affection for bunnies and elaborate dress. McCarthy had the audience roaring with laughter as she came out to present dressed in a huge, white queen's gown covered with stuffed rabbits.

The laughter continued as McCarthy explained that a costumer's job is to present an authentic dress for actors but "never distract from the story."

Melissa McCarthy, left, and Brian Tyree Henry present the award for best costume design at the Oscars on Sunday, Feb. 24, 2019, at the Dolby Theatre in Los Angeles. (Photo by Chris Pizzello/Invision/AP)

Later it came as no surprise as fan-favorite "Spider-Man: Into the Spider-Verse" won best animated film. The ground-breaking and mind-bending film about multiple spider-heroes from multiple universes gives Sony Pictures its first Oscar for animated feature, a category that has been dominated by Disney for its 18-year existence.

Last year's Oscars followed the rise of the #MeToo movement, the launch of the gender equality group Time's Up and the downfall of Harvey Weinstein. A year after best-actress winner Frances McDormand urged the adoption of an "inclusion rider" (a contractual stipulation for the diversity of a film's cast and crew), numerous production companies, stars and one studio (Warner Bros.) have made similar pledges.

In the last few years, the academy has considerably increased its membership in an effort to diversify its ranks, which have historically been overwhelmingly white and male. In June, the academy invited a record 928 new members. 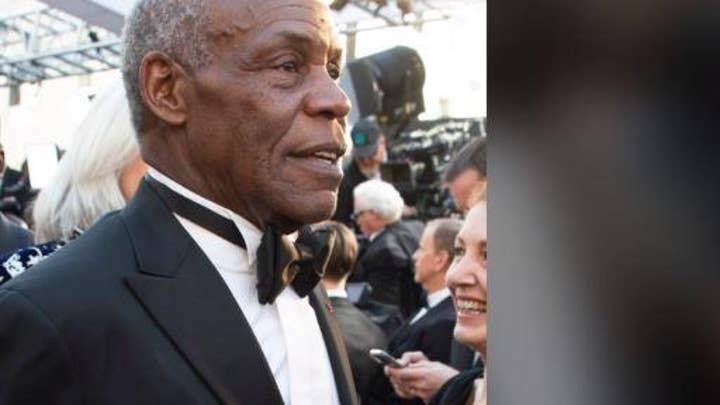 Several of this year's nominees have been affected by sexual misconduct allegations. "Bohemian Rhapsody" director Bryan Singer, who was fired in mid-production, was accused of sexually assaulting minors; he has denied it. "Incredibles 2" producer and Pixar co-founder John Lasseter last year departed the Walt Disney Co. after acknowledging "missteps" in his behavior with female employees. (He has since been hired by Skydance Media.)