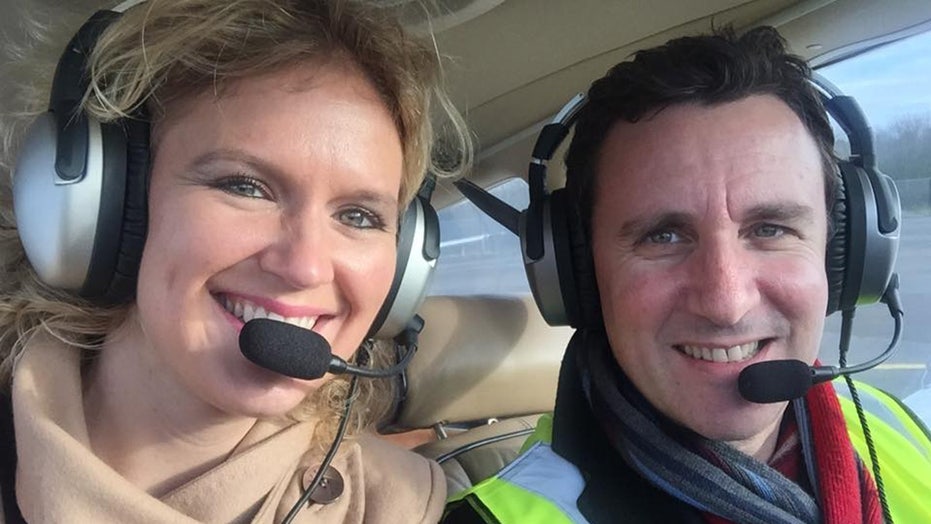 A young British family has died after their plane crashed in the Swiss Alps and burst into flames on Sunday.

Award-winning music producer Jonathan Goldstein, his musician wife Hannah and their baby daughter were flying from Switzerland to Italy when their aircraft crashed above the pass near the Italian border.

The plane had been in the air for just over an hour when their Piper PA-28 Arrow aircraft burst into flames above the Simplon Pass.

The pass is a popular route 6,578 feet above sea level through the mountains that connect Switzerland and northern Italy.

The couple had set off from London on Saturday morning and landed in Troyes, France before making a second stop in Lausanne, Switzerland, Le Matin reported.

A young British family has died after their plane crashed in the Swiss Alps and burst into flames on Sunday. (Facebook)

Their bodies, along with that of their baby, were recovered from the wreckage, Valais Police confirmed.

A statement from police read: "The small plane type 'Piper' took off around 9 a.m. from a Vaudois airfield for Italy... For currently unclear reasons, the plane crashed around 10.25 a.m. on the Simplon Pass above the hospice and went up in flames."

However, it has not been determined what caused the crash.

A hiker walking in the area with his family, said he saw two burning objects fall before hearing two huge bangs.

The couple's neighbor Ankita, 30, told the Mirror Online that she was told the sad news by Hannah's father late last night.

Stay-at-home mum Ankita said: "We were friendly with each other. We've only lived here about three months. They have a pet rabbit and we both have little ones.

"I started speaking to Hannah quite often about six weeks ago.

"She asked if I could look after Rufus because they said they were going on vacation.

"We were out yesterday and when we returned yesterday, I noticed the hutch was missing.

"I tried ringing Hannah and Jonathan but their phones weren't connecting. Hannah had given me her parents numbers for emergency so I called her dad last night.

"I said I was sorry to ring so late as it was about 9.15pm but I couldn't find Rufus. He said there was a tragic accident and three of them died.

"After that, I don't remember what happened as I started crying.

"Hannah had said they were going to Italy and the weather might be bad. I started crying when speaking to him.

"I still cant believe it, I couldn't sleep last night."

It is unclear who was actually flying the plane at the time.

A Foreign Office spokesperson told Sun Online: “Our staff are assisting the relatives of a British family who died in a plane accident in western Switzerland and are also in contact with the local authorities.”

The couple were said to be aviation enthusiasts and had acquired a Piper PA-28 Arrow several years ago.

According to their social media profiles, they traveled regularly.

Jonathan Goldstein founded the Goldstein Music Group and has worked with HBO, the National Theatre and Royal Shakespeare Company.

He also won an Ivor Novello Award in 2007 for his work on the BBC/HBO film Primo.